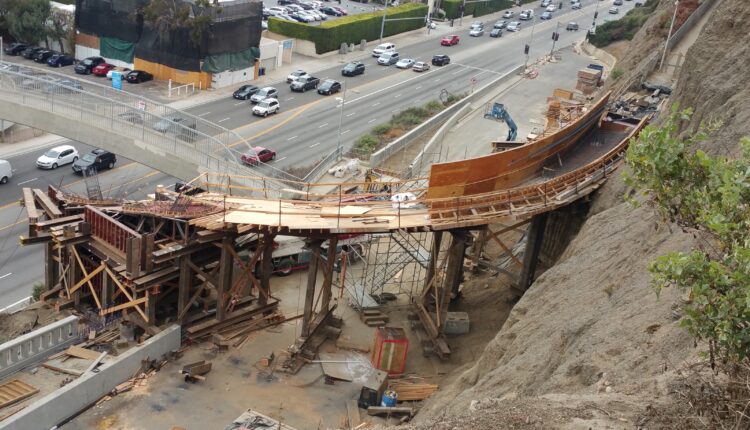 The Santa Monica Public Library is proud to present the latest addition to the library’s digital archive collection — California Incline Bridge Replacement Project, 2015-16. This is how we document the construction of one of the most important citizens’ projects in the city’s history.

Freeway entrances aren’t typically postcard-worthy structures, but California Incline is in a different league. The incline extends approximately 1,400 feet from the intersection of Ocean and California Avenues at the top of the Palisades Cliffs to the Pacific Coast Highway at the base of the cliffs. In addition to being a major transportation route connecting downtown Santa Monica to the Pacific Coast Highway, it’s a destination point with breathtaking views of Santa Monica Bay.

In the early 1990s, the decaying structure (which had been around for about 80 years) was classified as seismically deficient. In 2007, a federal grant provided most of the funds needed to rebuild the historic building. And on April 20, 2015, the crews began demolishing the existing incline and building a new, modern one.

As a partnership between the California Department of Transportation (Caltrans) and the city of Santa Monica, the $ 17 million California Incline Bridge Replacement Project opened on September 1, 2016 with a lot of civil roar. The new incline includes:

This collection consists of several hundred images captured by Gary Bonart, a longtime Santa Monica resident. Bonart visited the California Incline site from June 2015 to October 2016 to document the construction and opening of the new Incline. After his death in 2020, a family member donated the pictures to the library.

The collection currently spans June 2015 to June 2016. It will be expanded later this year with the rest of the donation (July to October 2016).