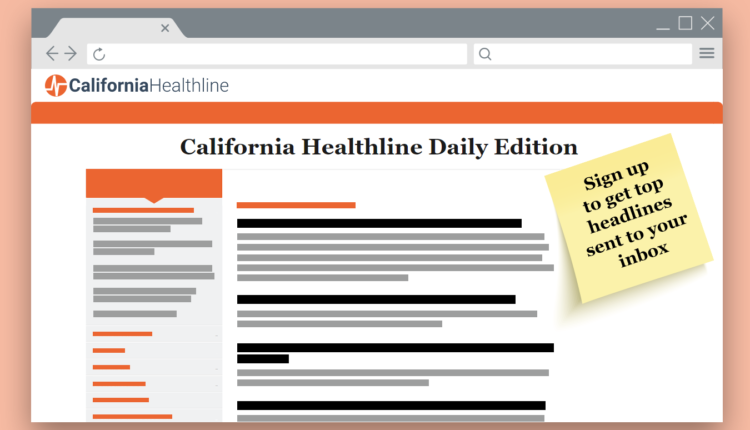 Vulnerable Californians Worried About Mandates Ending: Renata Garza-Silva, who is immunocompromised, and Hillary Liber, who is diabetic, are among the millions of Californians at greater risk of complications from a COVID-19 infection despite being fully vaccinated. Both worry that the statewide protective measures that had given them some peace of mind during the pandemic are now lifting, increasing their susceptibility and limiting where they can go and what they can do. Read more from CalMatters and CapRadio.

What Is The Future Of Single-Payer?: For at least the immediate future, single-payer health care in California seems dead. It died on Jan. 31, when its author withdrew legislation creating it from the Assembly floor, citing insufficient votes. But there are rumblings. And since nothing ever seems to die in the Capitol, the question now being asked is: After being sidelined in the Legislature, will single-payer make a comeback in California? Read more from Capitol Weekly.

The number of new coronavirus cases in the Bay Area has fallen by nearly 80% since the beginning of the month, but all but three counties in the region still have high or substantial transmission rates, as does most of California, according to federal data. California is still reporting around 200 lives lost to COVID-19 each day, as Gov. Gavin Newsom makes the case for moving the state out of “crisis mode.” Daily deaths — a lagging pandemic indicator — are up about 10% since the beginning of the month, making California one of a handful of states not to see a steady decline in fatalities coming out of the omicron winter surge. (Vaziri, 2/22)

The OC Health Care Agency reported 760 new cases of the coronavirus over the holiday weekend, increasing the cumulative total since tracking began in the county to 535,935 as of on Tuesday, Feb. 22. There were 8,555 new cases reported in the last two-week period as of Tuesday. That’s down 70% from Feb. 8, when the two-week total was 28,462. (Goertzen, 2/22

As the region re-emerges from the staggering omicron surge of the coronavirus, health professionals from the San Fernando Valley to San Bernardino to Long Beach are facing yet another blunt reality: COVID-19’s impacts among those with unchecked underlying conditions. Physicians are sounding alarms as people with serious non-COVID-19 conditions continue ignoring symptoms and waiting until the last minute to go to emergency rooms, fearful of contracting the virus. (Love, 2/22)

Modesto Bee:
Chemical In COVID Test Kits Can Cause Sickness If Ingested

While at-home COVID-19 tests are considered safe and effective when used properly, a chemical found in some popular kits is leading to an increase in calls to poison control centers. Sodium azide is potentially deadly in large amounts, but only small quantities are present in testing kits — enough to cause low blood pressure, heart palpitations, headache and dizziness if ingested, or burning and irritation to exposed skin, experts say. (Willetts, 2/22)

Proposed legislation in California would require all K-12 public schools to develop COVID-19 testing plans for students and staff and the funding for schools to do it, Sen. Richard Pan said in announcing it Tuesday. Under current guidance from the California Department of Public Health, school districts are encouraged but not required to conduct regular COVID-19 testing. (2/22)

Vaccinated Los Angeles County residents may soon be able to go maskless in indoor settings that check for proof that they’ve received their doses, county officials said Tuesday. Details of that forthcoming shift remain scarce, but such a change would be a potentially significant loosening of rules in a region that has been more reluctant to relax such requirements even as the Omicron wave recedes. (Money and Lin II, 2/22)

Los Angeles County could be on the verge of easing its indoor mask-wearing requirement, with Supervisor Janice Hahn announcing on Tuesday, Feb. 22, that vaccinated people will soon be able to shed face coverings in indoor locations that verify COVID-19 vaccination status. On her Twitter page, Hahn wrote that the county Department of Public Health will issue an updated Health Officer Order this week, possibly taking effect Friday, “allowing vaccinated people to take off their masks indoors at places that check for proof of vaccination. This puts us significantly closer to aligning with the state.” (2/22)

The Los Angeles Unified School District on Tuesday dropped its outdoor mask mandate after the county allowed K-12 schools to lift the requirement last week. Students will no longer be required to wear masks at recess or during athletics, as long as they are outdoors. (Ding, 2/22)

San Diego Unified now says students won’t have to get vaccinated against COVID-19 until August, as a legal challenge to its student vaccine mandate remains under appeal. The San Diego Unified School Board Tuesday approved a new timeline for its student vaccine requirement. Students age 16 and older will now have to show proof of their first vaccine dose by Sept. 6 and proof of their second dose by Oct. 4 to attend school in person. Those students will have to get vaccinated earlier if they want to participate in summer programs and fall extracurriculars, including sports. (Taketa, 2/22)

After pausing the annual count of homeless residents for a year because of the pandemic, the Point-In-Time count was carried out Tuesday with a few COVID-19-related changes. (Booth, 2/22)

Attorneys for the city and county of Los Angeles are set to resume settlement talks Tuesday in efforts to avoid a trial and resolve a long-running lawsuit demanding that local government find shelter for the thousands of people camping on sidewalks and near freeways. A federal judge ordered the mandatory discussions after city and county representatives indicated they had no sense of when or if they might strike a deal that would lead to a shared settlement with the association of downtown residents, homeless individuals and property owners which filed the suit two years ago. (Shuster, 2/22)

Voters in Sacramento could be asked this fall to reshape how their city and county governments respond to the region’s homelessness crisis — including a proposal to ban unhoused people from living on public property — should two early stage initiatives qualify for the November ballot. Paperwork was filed earlier this month for what proponents call the “Emergency Temporary Shelter and Enforcement Act of 2022.” The proposed measure would require the city of Sacramento to dramatically increase homeless shelter space, while also barring people from living in parks, on sidewalks or other public property once a designated shelter space is offered to them. (Nichols, 2/22)

Rick Gentry, president and CEO of the San Diego Housing Commission for the past 14 years, announced he was stepping down from the organization Tuesday, with his last day expected to be March 31. His resignation comes a week after the San Diego City Council formed a committee that will look into reforms of the Housing Commission following a controversy involving the organization’s purchase of two extended-stay hotels to house homeless people. (Warth, 2/22)

City News Service:
Section Of MacArthur Park Reopens After Removal Of Hundreds Of Homeless — And $1.5 Million In Improvements

Ahead of the park’s closure, Cedillo said that 290 people who were living in MacArthur Park were moved indoors. Another 36 unhoused people who were not living in the park were also moved indoors after they approached outreach workers in the park on Oct. 15 expressing the desire for shelter — bringing the total to 326, Cedillo’s office said. On Jan. 12, MacArthur Park was included in a number of locations selected for enforcement of the city’s anti-camping law to prohibit tents, sleeping and blocking of the public right-of-way. The resolution, which was passed by the City Council and introduced by Cedillo, included both sides of the park. (2/22)

An Urban Alchemy street ambassador was shot Tuesday afternoon outside the homeless safe sleeping site near City Hall, and police were hunting for two men that witnesses said were the shooters. The ambassador apparently suffered a minor wound beneath his left shoulder and calmly stood as he gave a statement to police officers. He was then packed into an ambulance and driven away for medical care. He declined to comment to The Chronicle or give his name. (Fagan, 2/22)

Los Angeles Times:
Amid A Surge In Deaths, A Safe Place To Get High — And To Avoid An Overdose

Last year, a record 100,000 Americans died from drug overdoses. Officials at the Centers for Disease Control and Prevention say the grim milestone stemmed from the stresses of the COVID-19 pandemic and an increasingly dangerous drug supply. In reaction, some elected officials and activists have ramped up efforts to open centers where drug users can be monitored as they shoot up and immediately receive treatment if they begin to overdose. The pair of sites in New York City, privately funded and run by a nonprofit called OnPoint NYC, have been supported by former Mayor Bill de Blasio and his successor, Eric Adams, and are similar to centers long open in Canada, Europe and Australia. (Lee, 2/23)

Following an outpour of support and opposition, a cannabis dispensary is one step closer to opening up shop in Oxnard Shores. The Oxnard City Council last week overturned the Planning Commission’s denial of a special-use permit allowing TD Enterprise LLC to operate its Oxnard Holistics dispensary at 1015 Harbor Blvd. (Varela, 2/22)

AP:
What Lies Beneath: Vets Worry Polluted Base Made Them Ill

For nearly 80 years, recruits reporting to central California’s Fort Ord considered themselves the lucky ones, privileged to live and work amid sparkling seas, sandy dunes and sage-covered hills. But there was an underside, the dirty work of soldiering. Recruits tossed live grenades into the canyons of “Mortar Alley,” sprayed soapy chemicals on burn pits of scrap metal and solvents, poured toxic substances down drains and into leaky tanks they buried underground. (Mendoza, Linderman, and Dearen, 2/22)

CapRadio:
With Freezing Temperatures Coming, Here’s Where To Find A Sacramento Warming Center

Several warming centers will open as early as Tuesday night across the Sacramento region to protect homeless residents and those without heat from the freezing temperatures expected early Wednesday morning through Friday. The National Weather Service expects Thursday morning will be the coldest, with temperatures as low as 25 degrees. (Nichols, 2/22)