We tried the ‘vegan McDonald’s’ 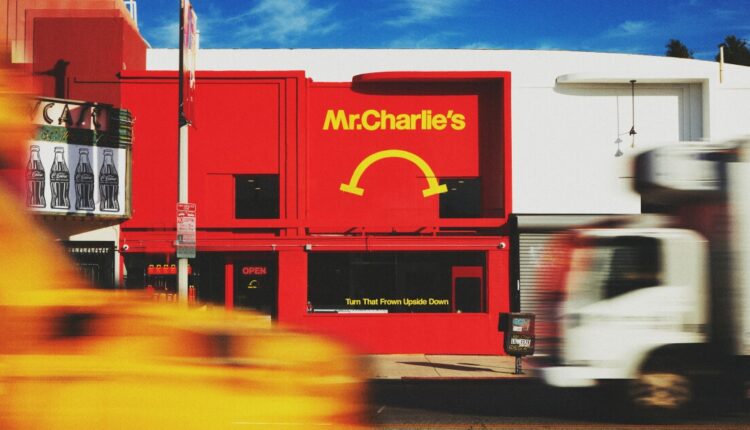 There’s a new fast-food restaurant on La Brea Avenue, just south of Melrose. The is a familiar fire engine red. The name “Mr. Charlie’s” is written in bright yellow letters above a yellow frown. Squat yellow stools, the kind you’d likely find in a kindergarten classroom, line the front of the building as seating. If you drive by over a certain speed, you might mistake it for a McDonald’s.

This is the restaurant TikTokers are dubbing the “vegan McDonald’s,” though it isn’t a McDonald’s at all. In fact, it’s the opposite.

Almost 4 million people watched Lizzo review the Mr. Charlie’s Frowny Meal on TikTok. Countless users have posted videos walking through the space, checking out the T-shirts upstairs and the artwork featuring what looks like Marilyn Monroe and Ronald McDonald’s love child all over the walls.

Owner Charlie Kim wanted to open a restaurant that offered plant-based versions of well-known fast-food items. The Not a Hamburger ($6) is an Impossible burger with pickles, mustard, ketchup and diced onion. The Not a Cheeseburger ($7) adds vegan cheese to the party. And the Double Not ($8) includes double Impossible patties, double vegan cheese. The Not Chicken Nuggets ($7) are made with Impossible nuggets and the fries ($5) are fries.

Instead of a Happy Meal, Mr. Charlie’s has a Frowny Meal (a Not a Burger, fries, nuggets and a drink, $15-$17 depending on burger choice). The food is served in red boxes adorned with the Mr. Charlie’s name and frown logo. Underneath the upside-down smile are the words “The Unhappie Meal.”

The Not a Cheeseburger from Mr. Charlie’s made with Impossible meat and plant-based cheese.

“McDonald’s who?” Kim said on a recent phone call.

I asked him about the restaurant’s similarities and nods to McDonald’s.

“No idea what you mean,” he said. “I really want to get people eating plant-based food. That’s the goal here.”

#veganmcdonalds has 1.1 million views on TikTok. We reached out to McDonald’s for comment on its vegan lookalike — we’re still waiting to hear back.

After attending UCLA and getting a job in corporate marketing, Kim, 35, left his career to help his parents run Aria, the family’s Korean street food restaurant in San Francisco’s Tenderloin. When he moved to Los Angeles in 2019, he was looking to open a location of Aria. But after having a baby, and with his wife following a plant-based diet, Kim started to move toward more vegan foods for himself and his family.

“Growing up I was eating fast food a lot,” Kim said. “I’m a big dude, I play hockey and I was used to eating meat and all this heavy stuff. I want to be healthier to take care of my family.”

He opened Mr. Charlie’s on Valentine’s Day as a restaurant and pop-up event space. Downstairs includes the restaurant and a small display case advertising merch from collaborations with various artists and brands. Upstairs is a space where those brands and artists can showcase their work or products, free of charge.

Some TikTok users comment on the price of the Frowny Meal being close to $20. Kim notes that the mission of the restaurant is about more than just food.

“I wanted to do something more for the planet, but also open a space for community engagement as well,” he said.

The seven employees at Mr. Charlie’s are all from the Dream Center, a nationwide organization that provides housing, resources and training for people transitioning out of homelessness or incarceration.

Each full-time manager is given a Capital One credit card, in addition to compensation.

“We pay $300 a month to each member for incidentals such as gas to help them build their credit,” Kim said.

Chase Garcia, who leads the transition program at the Dream Center, said: “They [Mr. Charlie’s] have hired multiple residents from the Dream Center and some have already moved out since working there due to wages they are earning and management opportunities.”

Kim has lofty goals for the future of Mr. Charlie’s and is looking for restaurant partners interested in turning their spaces into Mr. Charlie’s locations. The Frowny Meal from Mr. Charlie’s comes with a Not a Burger, Impossible nuggets, fries and a drink.

“If you have a failing fast food restaurant anywhere in the country and you need the help and it’s something that we can support, we are down to Mr. Charlie your space and partner with you,” he said. “We can work with your staff and retain those jobs.”

How does the food taste? Without a traditional culinary background, Kim said he wanted it to be “simple.”

“People are already going to know the food is vegan, so I don’t want them to be like, ‘This is so vegan,'” he said. “I want it to taste like a real burger.”

I recently tried a Frowny Meal alongside an actual cheeseburger from McDonald’s.

The McDonald’s bun was dry. The patty tasted like the last patty at a backyard barbecue — that overcooked one hiding under a leaf of lettuce, getting cold and hard as the afternoon progresses.

The Mr. Charlie’s bun was toasted with a welcome slick of grease. The patty was noticeably thicker. Adorned with diced onion and condiments, the sandwich was, let’s say, 38% better than the real thing.

“This is just the beginning,” Kim said. “I want this to be the biggest movement in the vegan world.”

Readers and Tweeters Remain Vigilant on Masking and Billing