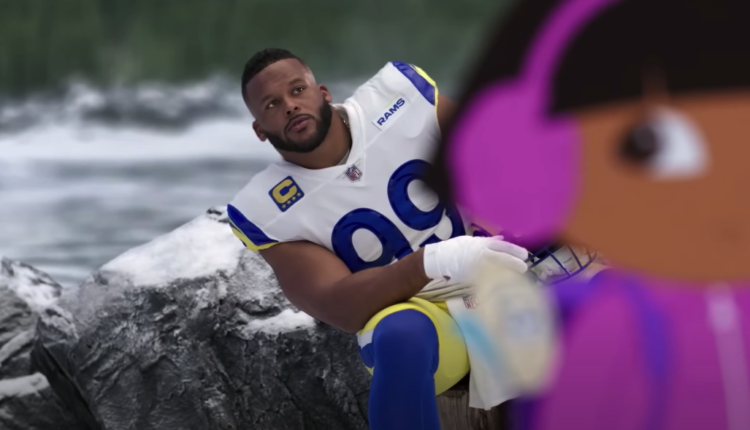 The Los Angeles Rams have messed up this season.

Sitting at 3-7 and burdened with an injury report that resembles a starting lineup, the Rams likely won’t be playing in any high-profile games across the NFL’s broadcast partners. Their most prominent representative, however, is set to maintain a prescience through the game breaks, particularly on CBS.

Leave it to Aaron Donald to crash a football party, as the star defender appears in a commercial for the Paramount+ streaming service, which offers live NFL games broadcast on its parent network. Known for reaching statistical heights that other defenders struggled to even sniff, Donald even manages to defy the odds in this one, quelling the wrath of Keegan-Michael Key’s renowned, quick-tempered substitute teacher character Mr. Garvey.

The character, who debuted on Key’s sketch comedy series “Key & Peele” (starring alongside Jordan Peele), is often depicted mispronouncing common names and reacting with increased anger upon being corrected. Donald makes his appearance after Mr. Garvey encounters the animated titular characters from series available on Paramount+, including “Blaze and the Monster Machines,” “Big Nate,” and “Blue’s Clues,” and “Dora the Explorer,” as well as Krumm from the old Nickelodeon cartoon “Aaahh!!! Real Monsters.”

Unlike the others, Donald happily responds when erroneously called upon, accepting the name “AA-Ron,” much to Garvey’s gratitude.

The Rams could perhaps be better off channeling some of Garvey’s trademark rage: the team’s Super Bowl defense is mired in a four-game losing streak, which recently featured losses to fellow doomed groups from Arizona and New Orleans. Donald, true to form, has done what he can to beautify the proceedings (10 tackles for a loss, including five sacks), but injuries and inconsistency have removed Los Angeles from the playoff bracket.

Los Angeles returns to action on Sunday when they take on the Kansas City Chiefs at Arrowhead Stadium (1:25 pm ET, Fox). They will later partake in CBS’ Christmas Day game against Denver which will stream on Paramount+ alongside an alternate broadcast on Nickelodeon.

Want to see the Champs? Get your LA RAMS game tickets from SI Tickets here!