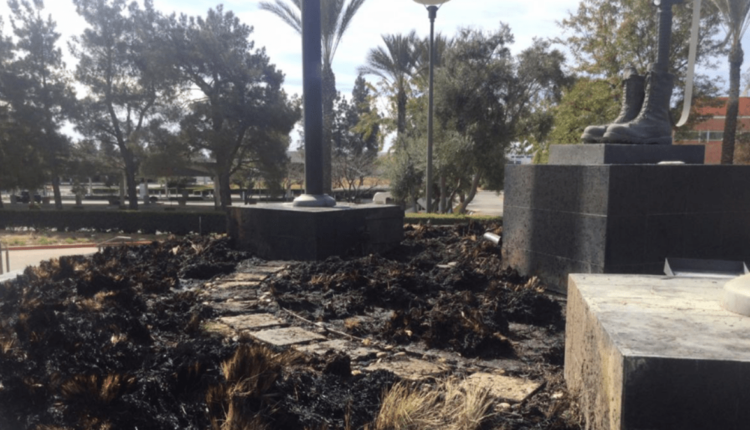 An arson investigation is underway in Moreno Valley, after one of the city’s veterans memorials was vandalized early Saturday morning.

A fire was reported around 5 am on March 19 at the Veterans Memorial at the Moreno Valley Civic Center, a statement from the city said.

The monument consists of “a star-shaped monument features large granite panels upon which the names of Moreno Valley soldiers killed in action are inscribed,” according to the statement. “The Memorial’s centerpiece is a battlefield cross bronze statue, “Fallen Soldier,” created by Richard Rist of The Large Art Company of Baltimore, Maryland.”

The sculpture is of a pair of military boots, an M16 rifle with the barrel down between the boots, and a combat helmet

Moreno Valley firefighters quickly moved to extinguish the flames, but the plants around the sculpture were left visibly charred.

“The people responsible for this horrible and cowardly act will be brought to justice,” said Dr. Yxstian Gutierrez, Mayor of Moreno Valley, in the statement. “This is not only destruction of government property, but it is also an attack on our veteran community in Moreno Valley.”

The city and Riverside County have launched an investigation into the incident. So far, information about potential suspects remains “limited,” the statement said.