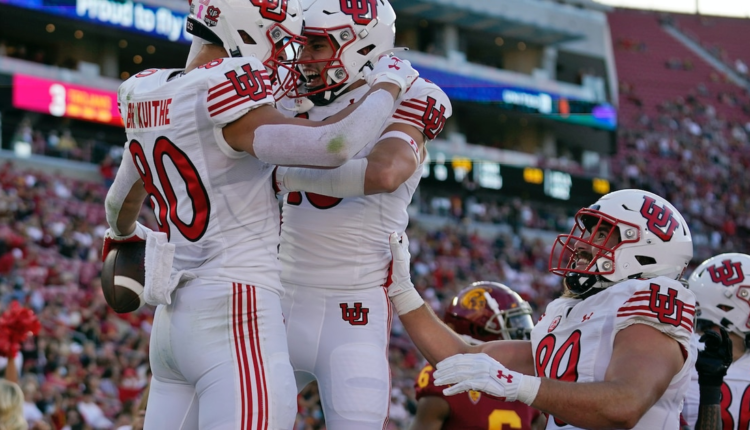 Los Angeles • The University of Utah football team has carried over the emotion, sadness and frustration of the past two weeks to the USC.

In their first game since second cornerback Aaron Lowe passed away on Sept. 26, the Utes scored five touchdowns on their first seven drives while the defense overwhelmed the Trojans after a blotchy start to a crucial 42-26 win at the LA Coliseum.

The win is Utah’s first win in the city of Los Angeles since 1916, seven years before the Colosseum opened. The Utes were 0-8 all-time against USC at the Coliseum, including 0-5 as a member of the 2011 Pac-12.

The Utes opened the second half by walking 75 yards in just five games, as a basic up-the-middle-run call to Tavion Thomas 43 yards for a result and a 28-10 lead on Jordan Noyes’ extra point reached.

USC’s offense, recording 201 yards on their first four drives but only boasting 10 points, faded badly as Utah’s defense came on.

On fourth and eighth from the Utah 35-yard line, Trojans quarterback Kedon Slovis attempted a pass to the left through the heavy traffic, only to vonte Davis intercept him at 15 and return at 45 permit. A 15-yard unsportsmanlike penalty against USC placed Utah on the Trojans 45.

Utah went on to walk 40 yards in four games, topped off by Cam Rising’s 17-yard touchdown run on a third-and-1 keeper breaking two tackles before extending his right arm into the end zone, while he was spinning. Another Noyes extra point extended Utah to a 35-10 lead with 9:12 in the third quarter.

Rising, who started on the road for the first time in his career, finished 21-for-27 for 283 yards and three touchdowns.

Already in the first half with 14:10 up front, Utah’s defense forced a punt, but did so without taking a time out on the third or fourth failure to extend the first half. Not doing this seemed questionable, as did some of the play calls on the subsequent ride, but the payoff on that following ride is all everyone will remember.

On fourth-and-1 from the Trojans’ 37-yard line, Rising handed the ball over to TJ Pledger, who threw the ball back to Rising. The fourth grader immediately threw a pass in the middle to Devaughn Vele, who stood behind his defender and then hit two more for a flea-flicker touchdown in front of the stunned onlookers at the Coliseum.

Rising finished the first half 12-for-15 for 180 yards and two touchdown passes when the Utes led into the locker room at 21:10. This despite the fact that USC is playing 14 more games and has a time advantage of almost 2 to 1.

The Tribune will update this story.

The Los Angeles County Sheriff will not enforce the vaccination mandate