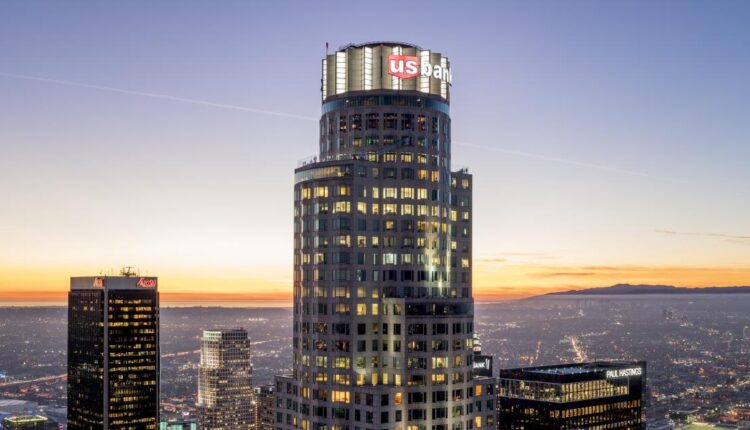 Nearly one year after acquiring the US Bank TowerSilverstein Properties continues to revamp the second* tallest building in Downtown Los Angeles.

This week, the New York-based real estate developer announced the installation of new murals by 15 LA-based artists on the top floor of the building, which are billed as the “highest murals in the state of California.” Check them out in the attached drone footage.

A little bit closer to the ground, Silverstein also announced two new lease signings at the building. Patent and civil litigation firm Skiermont Derby, LLP has inked a seven-year lease for 4,500 square feet of office space on a portion of the 58th floor of the building, while Dechert, LLP has expanded its existing 9,700-square-foot lease on the tower’s 49th floor with an additional 5,900 square feet. Skiermont Derby will move into its new office from 800 Wilshire in Summer 2022, while the Dechert expansion is expected to be completed in September 2022.

As part of a nationwide expansion, co-working giant WeWork is spending $5.2 million to launch its WeWork Growth Campus program at existing locations at 1601 N. Vine Street in Hollywood and 222 Pacific Coast Highway in El Segundo. The program offers mentorship, networking, and educational programs for members.

Here’s what we’re reading this week:

Hollywood hotels scrutinized for financing under visa program: ‘Not fair’, critics say “Unite Here Local 11 joined 16 members of Congress in February to raise questions about that financing. Under scrutiny was whether the investments created the hundreds of permanent jobs, such as hotel housekeepers and busboys, that were intended by the program.” (LA Times)

From Rail to Roads and Back Again: The Rebirth of LA’s Public Transit “Los Angeles is famous for its freeways and traffic jams, but the metropolis actually began as a railtown — and looks like it may become one again soon. This is the story of a railtown’s rise, demise and rise again.” (KCET)

A new downtown LA hotel is going all in on amenities. Guess where they put the pool “The building, completed in 1926 as the Commercial Club, has regained those elements after changing a lot over the years, usually not for the better. Now it’s owned by a Santa Monica company that specializes in large-scale makeovers of historic properties to create uncommon inns for travelers weary or wary of upmarket chain hotels.” (LA Times)

Eyes on the Street: Red Pavement Bus Lane Improvements in Downtown LA and East Hollywood “In related news, yesterday, Metro announced that LADOT will be stepping up enforcement of bus lanes. This week, LADOT is issuing warnings for bus-lane violations. Next week, LADOT will be ticketing bus lane scofflaws.”

Amid student housing crisis, UCLA becomes first UC campus with four-year room guarantee “Ever since UCLA built its first four dorms six decades ago, in a quest to shift away from a commuter campus, the university has known that students who live on campus do better. Now, UCLA has reached a unique milestone. With two new apartments Buildings opening this fall providing 3,446 beds, UCLA will become the first and only University of California campus to guarantee housing for four years to first-year students and two years for transfer students this month.” (LA Times)

Demolition work begins on PS3 “The City of Santa Monica’s planned demolition of Parking Structure 3, located on 4th Street between Santa Monica Boulevard and Arizona, was set to begin on Monday, March 14, following the close of a legal battle that had been wagered by local business owners against the City and the California Coastal Commission.” (Santa Monica Daily Press)

Most of Metro’s New Crenshaw/LAX Light Rail Line is Substantially Complete – Opening Could be December 2022 “If all goes well – which hasn’t been the case for Crenshaw/LAX so far – the new rail line could open to the public as early as this December. Though early 2023 appears most likely.” (Street blog LA)