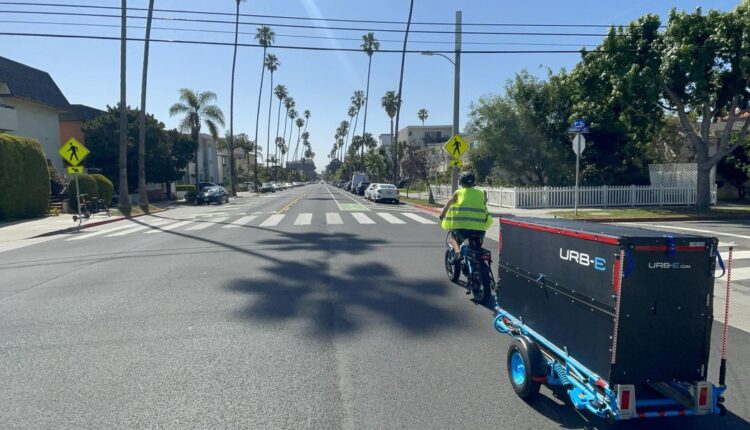 URB-E, a Los Angeles-based startup, may have the simplest solution of all: electric bicycles. With its fleet of souped-up, battery-powered custom e-bikes equipped with collapsible box trailers, the company is ferrying meals, groceries, ecommerce orders and other packages to doorsteps in LA and New York City.

Now, the mobility and logistics company is returning to its roots in California to partner with the Los Angeles Cleantech Incubator (LACI) and the city of Santa Monica on a pilot program that establishes zero-emission delivery zones. Santa Monica has established itself as the cradle of micromobility in recent years, and the city’s initiative—described as the first of its kind in the US—aims to live up to that reputation by carving out priority curb space for electric delivery vehicles in certain high -traffic corridors. In addition to luring new operators, the program should also lower air pollution, greenhouse gas emissions and noise pollution in some of the busiest parts of Santa Monica.

The pilot will feature 10 URB-E e-bikes that will service zero-emission delivery zones along Santa Monica Boulevard and Colorado Boulevard, with plans to expand the pilot to 20 URB-E vehicles in the near future. The startup will share the curb space with electric vehicles from the likes of Coco, Fluid Truck, Maxwell Vehicles and Nissan, as well as vendors like Ikea and Shopify. The pilot will run until the end of the year.

“I think we’ve already seen an enormous amount of excitement in this space,” LACI president and CEO Matt Petersen told dot.LA. “We know that URB-E is going to just crush it as they hit the streets.”

URB-E is no stranger to LACI: Founded in 2015 by former Ford and Fisker engineer Sven Etzelsberger and business development veteran Peter Lee, the startup joined the incubator in 2018—a stint that helped propel its business forward. Back in those days, URB-E was focused on developing e-scooters; initially, the company wanted to use its scooter technology and to deliver packages around the Burbank area, but quickly discovered that, to be cost-efficient, it needed to carry more weight than the scooters could handle.

“[The scooters] could pull around 300 or 400 pounds, which is not actually that much,” recalled URB-E CEO Charles Jolley, an Apple and Facebook veteran who now leads the startup. “In order to get that good balance of efficiency, you needed to carry around 800 pounds.” So URB-E went back to the drawing board and revamped its designs—moving on to e-bikes that can haul up to 800 pounds and a completely new container system.

In addition to its hometown, the company has also cut its teeth in New York City, where delivery riders pedal across neighborhoods in Manhattan and Brooklyn. Jolley said the length of a delivery run depends on the shape of the neighborhood, but it usually takes five-to-nine miles of riding to unload a full container of goods. The startup was boosted by a $5 million Series A funding round led by UBS Group early last year.

Another week, another new neighborhood for URB-E! Where is it? pic.twitter.com/VmLa2O1bNe

While bikes and containers are core to URB-E’s platform, the company is also collecting logistics data every step along the way. With a custom software app that riders use to navigate and deliver packages, URB-E is actively mapping the infrastructure needs of neighborhood-scale electric delivery. As the startup has grown, it’s gained insights into where to position charging stations and staging areas and how to efficiently execute deliveries.

That will help it support whatever electric contraptions may show up down the road as the delivery vehicles of the future, according to Jolley. “The vehicles can evolve over time, and we actually now have all of this infrastructure to support [them],” he said.