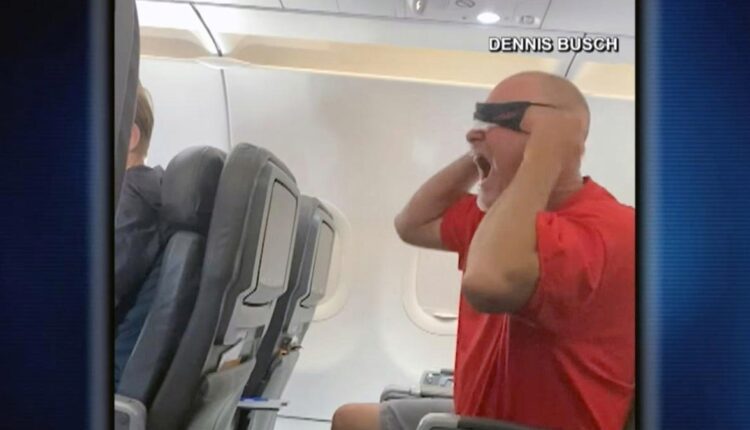 A Las Vegas man who scolded a flight crew and passengers and growled like a dog on an American Airlines flight from Los Angeles to Salt Lake City on Monday was charged with public intoxication and disorderly behavior.

The video shows the man standing in front of the aircraft and facing a flight attendant. The flight attendant can be heard telling the man to return to his seat and sit down.

After sitting down, the man growled like a dog as he put his mask on and off, showed his middle finger and cursed the flight attendants, later yelling “God bless America” ​​and yelling “Joe Biden!” according to the video from rider Dennis Busch.

It happened on a flight from Los Angeles to Salt Lake City. Busch also wrote on Facebook that the man had verbally attacked an Asian woman and said that she and her companion “did not belong here”.

The 61-year-old man was arrested at the gate, where he was examined and quoted in a hospital, authorities said. No lawyer was immediately included in the court records.

American Airlines confirmed the incident in a statement. The company also thanked the crew for their professionalism and the customers for their understanding.

Rowdy passengers had amassed a record $ 1 million in potential fines that year, a tribute to the tumult in the sky. Airlines had reported around 3,900 incidents of unruly passengers by mid-August. Three-quarters involve refusing to wear a mask, and alcohol was a common factor, according to the Federal Aviation Administration.