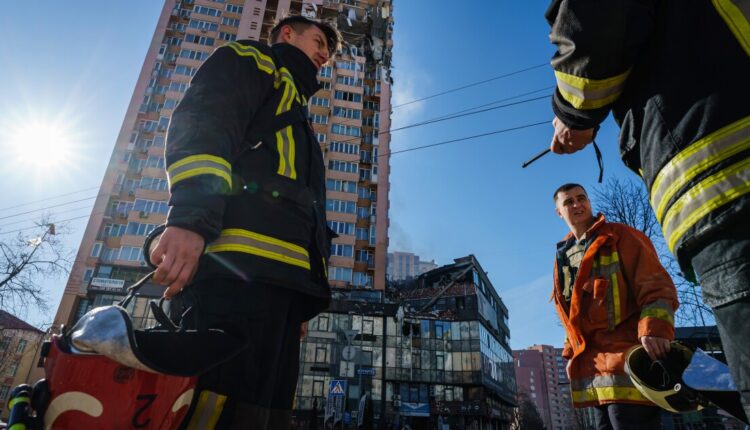 As a tense Ukraine awaited daylight early Sunday, military forces and thousands of armed volunteers fought fiercely to protect their capital against Russian troops after a day of explosions and gunfire that shook parts of the city, leaving a missile-hit high-rise tower partially destroyed and residents crowded into subway stations for shelter.

Ukraine’s outgunned military desperately sought to fend off an advance by invading Russian forces on Kyiv’s northern outskirts. Overnight, the skies lighted up after two explosions were reported about 20 miles south of Kyiv near Vasylkiv — a city with several fuel tanks and an air base — as nervous residents wondered how close Russians might be getting.

Skirmishes were reported in other parts of the beleaguered city. Shops were closed, nervous reservists clutched battered AK-47s in the streets, and improvised checkpoints made of piled-up tires jumped up to slow anticipated Russian infiltration.

Volunteers from the Territorial Defense Units gather ingredients to make Molotov cocktails to use against the invading Russian troops in Kyiv on Saturday.

Some signs suggested Ukrainian fighters were succeeding beyond the expectations of Russia, which US officials said has sent in the majority of the estimated 190,000 troops it had amassed near Ukraine’s borders.

Russians “have been frustrated by what they have seen is a very determined resistance,” a senior US Defense Department official said on Saturday.

The official added that, while Ukraine’s air- and missile-defense systems had been targeted, they remained viable, and that there was no indication Russia had taken control of any Ukrainian cities in what is Europe’s biggest ground war since World War II.

President Volodymyr Zelensky, who defiantly remained in Kyiv despite a reported American offer to be evacuated, called on Ukrainians within the country’s borders and beyond to defend Ukraine against Russia. Russian President Vladimir Putin launched the invasion on Ukraine’s eastern border Thursday after months of building up troops on its edges while denying there were plans to attack.

“We aren’t going to lay down weapons. We will protect the country,” Zelensky said in one of several video appearances. “It’s our land, our country, our children. And we will defend all of that.”

In a tweet Saturday, the Ukrainian Embassy in the UK said Zelensky had refused a US offer to be evacuated. “The fight is here; I need ammunition, not a ride,” read the post, quoting Zelensky. The US government did not confirm the exchange.

The US, which has dispatched several thousand troops to neighboring Poland, a fellow NATO member state, and announced multiple sanctions against Russia and Putin personally, on Saturday said it would join with Canada and major European powers to cut off certain Russian banks from SWIFT.

The international messaging system, which stands for the Society for Worldwide Interbank Financial Telecommunication, is used by 11,000 banks globally to complete transactions and will effectively isolate major parts of the Russian financial system.

Just days ago, President Biden said targeting Russian participation in SWIFT was “always an option” but not yet being pursued.

Also on Saturday, the US authorized an additional $350 million in military assistance to Ukraine. Some of it is earmarked for anti-armor and other ammunition and equipment.

Pentagon spokesman John Kirby said the extra aid was “a sign of our unwavering support for Ukraine’s sovereignty and territorial integrity.”

The move coincided with those by other nations to isolate Russia politically and economically as well as poor Ukraine’s military. Japan and Australia are among those that have imposed sanctions.

On Saturday, Germany — widely mocked for an earlier offer to donate 5,000 helmets to Ukraine defenses — said it would send 1,000 anti-tank weapons, 500 Stinger surface-to-air missiles and 10,000 tons of fuel.

Also on Saturday, Germany, Estonia, Latvia and Lithuania said they would close their airspace to Russian airliners. In a tweet, Estonian Prime Minister Kaja Kallas said, “there is no place for planes of the aggressor state in democratic skies.”

But the threat of a Russian takeover of Ukraine remained strong as Putin, who has long sought to expand Russian territory and influence over former Soviet Union territories, has refused to relent.

The ongoing assault has led many Ukrainians to flee, with 120,000 refugees making it to Poland in the last days, according to the United Nations. Tens of thousands more have crossed into Hungary, Moldova and Romania.

“This may go up, it’s changing every minute,” said Shabia Mantoo, the spokeswoman of the UN High Commissioner for Refugees. “It’s very fluid and changing by the hour.”

The agency estimated that up to 4 million people could eventually flee Ukraine to neighboring nations. 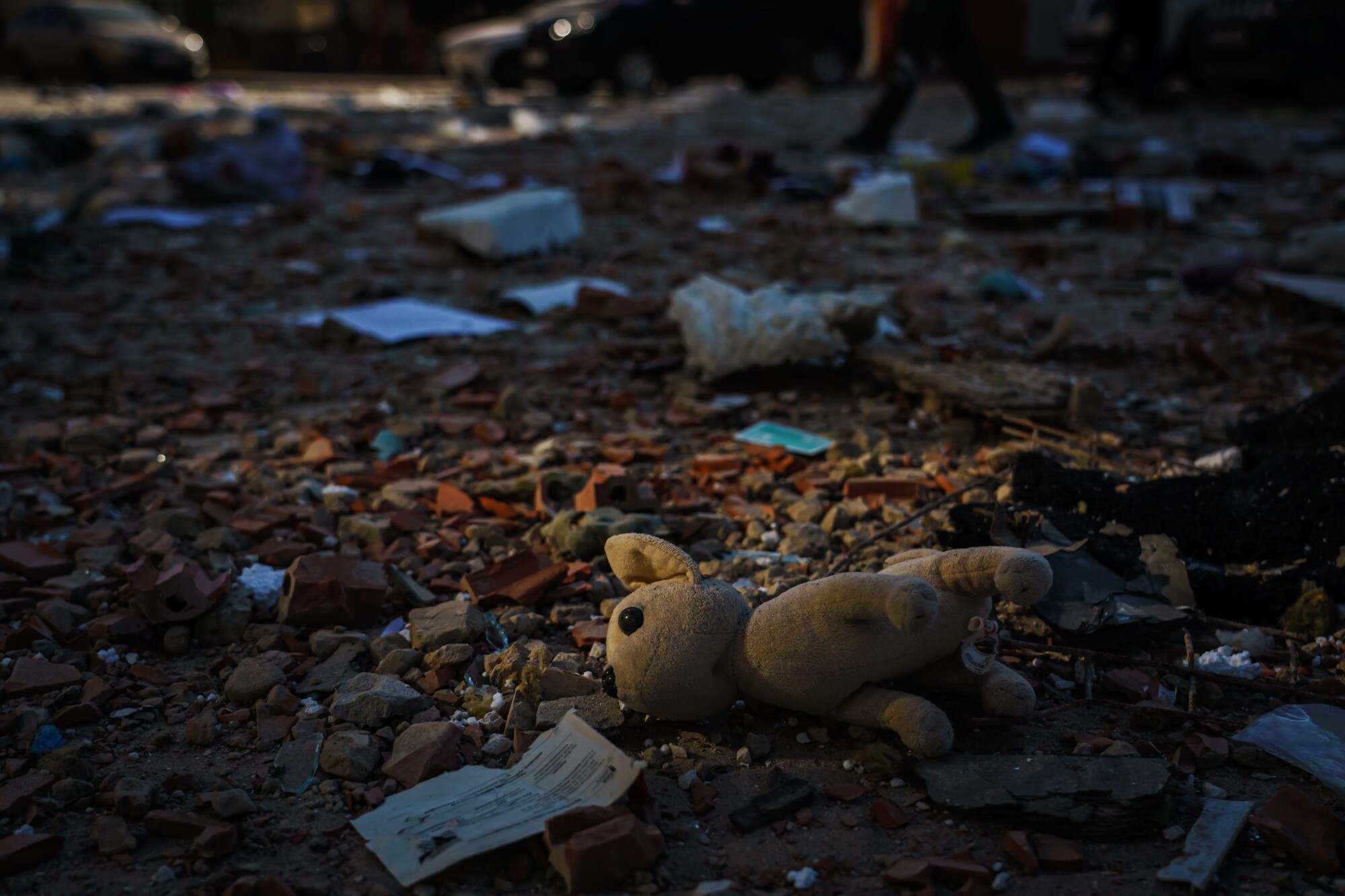 A toy sits amid the debris after a missile struck a residential building in Kyiv. 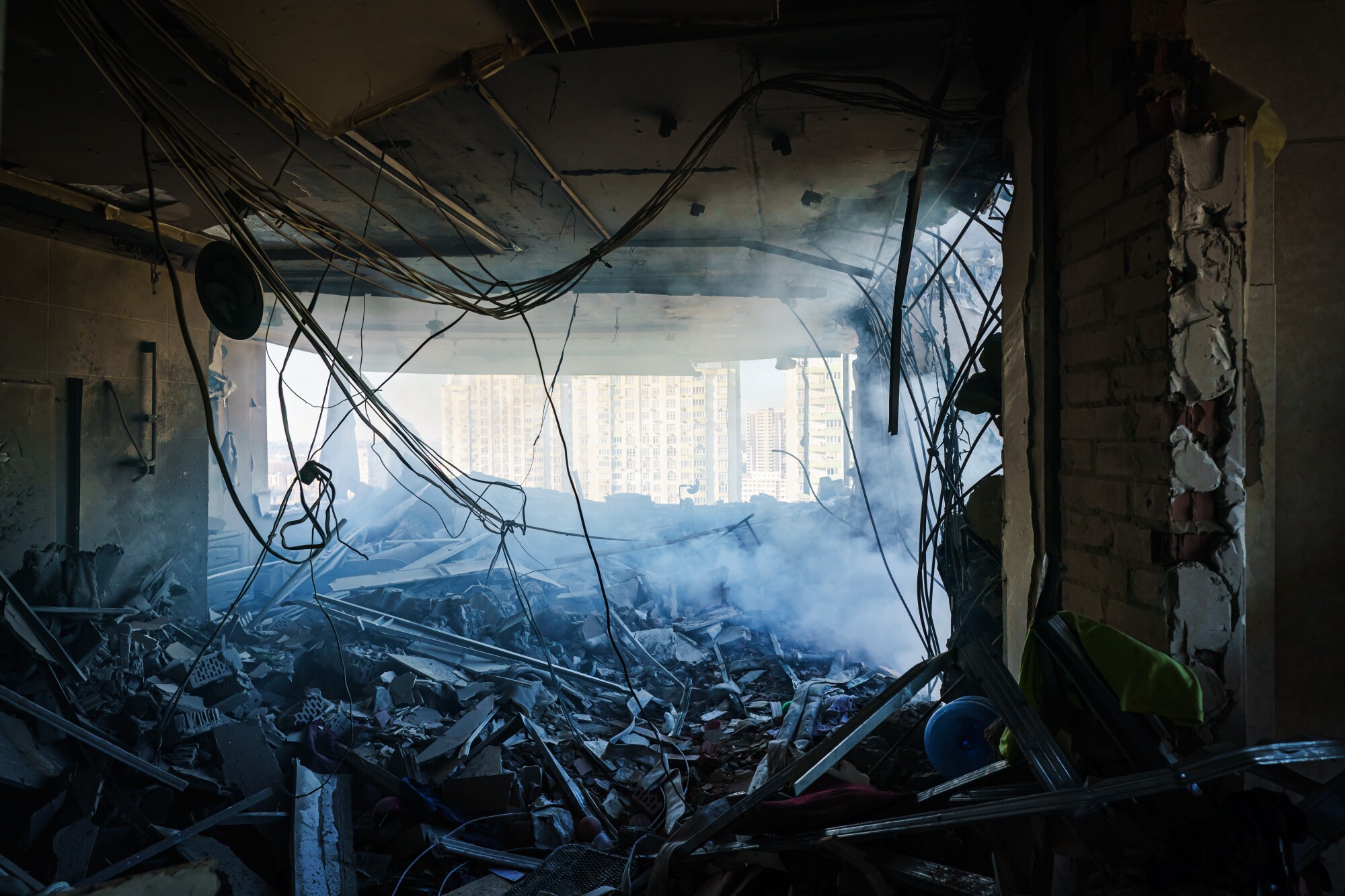 A view from the residential building in Kyiv that was badly damaged by a Russian missile. Six people were reportedly injured.

In Kyiv, a capital of nearly 3 million people in the country of 44 million people that’s nearly the size of Texas, sirens continued to blare overnight as residents awaited another day of war.

Saturday began as a beautiful, sunny day, the sort that would normally bring out crowds in force to enjoy the city’s many sights.

But gatherings in front of gas stations, pharmacies and supermarkets became more sparse as the day wore on, and nighttime brought a deeper-hued darkness.

The occasional car still zoomed past traffic lights; but now those lights flashed only yellow, an acknowledgment by the Kyiv municipality that no one had time to wait on red.

The ominous rise-and-fall of siren calls began around 8 pm in a city which only a few days ago simmered with pedestrians and cars until the late hours.

Kyiv Mayor Vitali Klitschko imposed a strict citywide curfew that would extend until 8 am Monday. Klitschko said he was taking the step to counter the efforts of Russian infiltrators suspected to already lurk in the city.

“We remind you that all civilians who will be on the street during the curfew will be considered as members of the enemy’s sabotage and reconnaissance groups,” the order stated.

Between Friday and Saturday, Ukrainian forces deliberately destroyed some of Kyiv’s many bridges as a defensive tactic aimed at slowing down the incoming forces. Those that remain standing were carefully guarded, like the Pechersky Bridge, where nervous but dour-faced soldiers popped trunks open and questioned motorists.

On Lobanovsky Avenue, the war’s impact was starkly evident where a shell had slammed into an apartment block on Saturday morning, obliterating a chunk of the building between the 16th and 21st floors and wounding six people, a spokeswoman for the Ukrainian Rescuers agency said. Glass, hunks of concrete and personal belongings from the mangled units carpeted the boulevard below.

About 80 people were evacuated from the tower, which also houses a travel agency, a sushi restaurant and a gym. The exploded round turned a 16th-floor apartment into a smoke-filled maw of distressed masonry and rebar; on the 18th floor, a wall dangled and swung gently in the wind like a concrete curtain.

It was the latest in the tally of civilian targets hit by Russian forces, despite Moscow’s insistence that its troops have aimed their massive firepower only at military installations.

“I don’t sleep these days, so I was awake beside my wife — she’s nine months pregnant — and reading the news when I heard this huge bang and the building shook,” said Eugene Limar, a 31-year-old programmer who lived on the 22nd floor. He was rushing down the stairs with two suitcases in hand, barely pausing a moment to speak to a reporter.

“I just dumped everything in these bags and we’re leaving,” he said.

Moments after he spoke, a fusillade of shots rang out in the distance, causing passers-by to scurry for cover. A black column of smoke rose a small distance away to the north.

Days into their large-scale assault by air, land and sea, Russian forces were apparently trying to encircle Kyiv in a campaign to depose Zelensky’s democratically elected government and install a pliant regime.

Besides the capital, other major Ukrainian cities, including Kharkiv in the northeast, have come under attack from a military of vastly superior numbers and weaponry. On Sunday morning, street fighting was reported as Russian troops entered the city.

Russian forces have also mounted deadly air and missile strikes from the north, east and south.

Nearly 200 people have been killed and more than 1,000 wounded since the offensive began, Ukraine’s health minister said Saturday.

A senior American defense official told reporters Saturday that Russia has launched more than 250 missile attacks. Most have been short-range ballistic missiles.

Russia has not issued any casualty figures.

In major European cities and around the globe, protesters — including many Ukrainian immigrants — gathered at Russian diplomatic buildings and city squares to criticize Russia and call for an end to war.

News reports said up to 20,000 gathered in Bern, the Swiss capital, with yellow-and-blue Ukrainian flags, while hundreds rallied in Sydney, some holding “Ukraine will prevail” posters.

Among them was Irina Kusdel, a 34-year-old Ukrainian who is married to a Mexican. Kusdel, who left Ukraine 10 years ago, is in regular contact with her parents who live about an hour from Kyiv.

“The people believe in their own efforts, in this resistance,” she said. “People are saying this is our land, why should we leave?”

“They don’t sleep because in the night they expect the worse,” she said of her family.

Many protests called on foreign governments to do more to help the Ukrainian people. 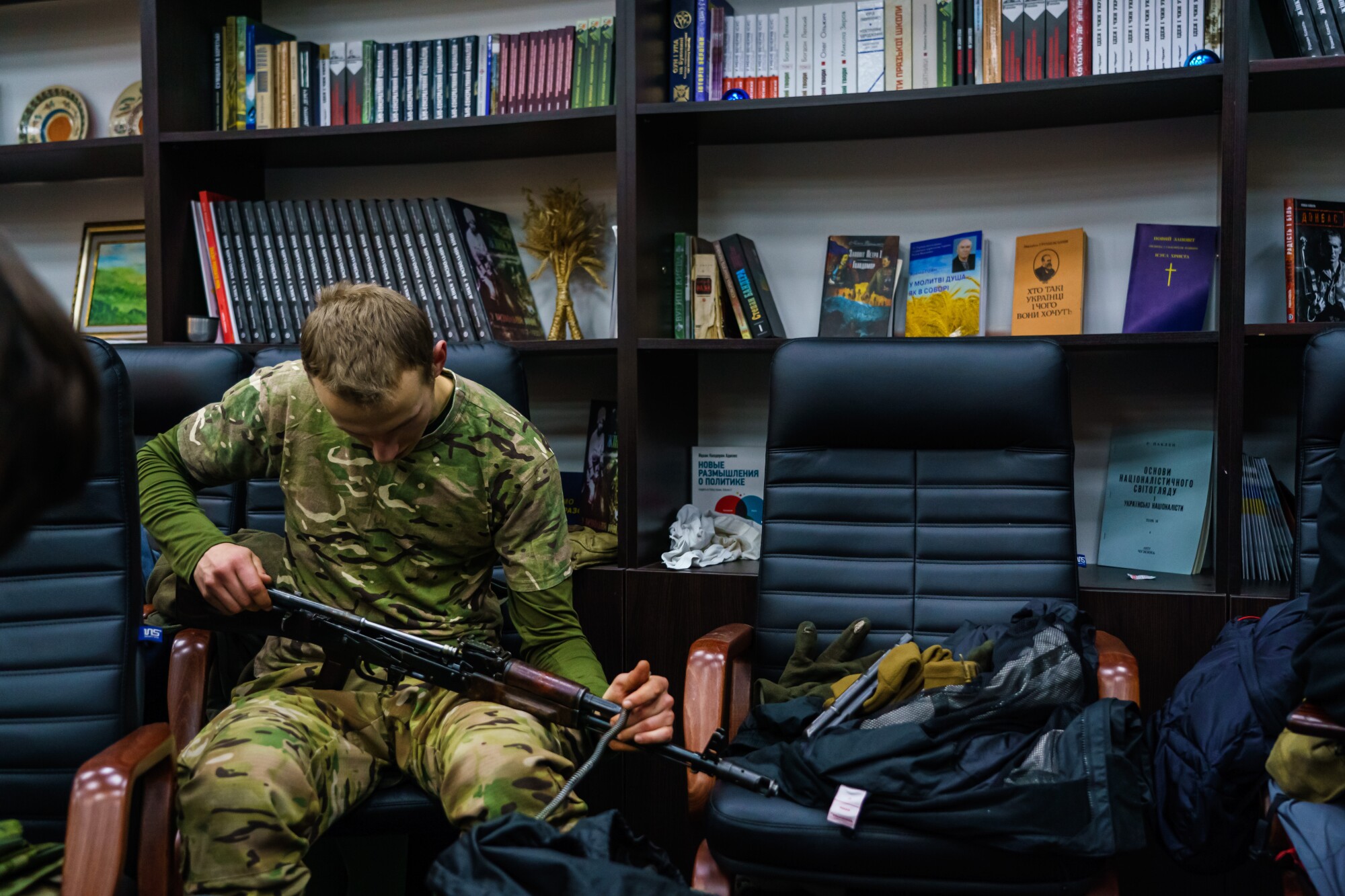 A volunteer from Ukraine’s Territorial Defense Units awaits his assignment at an outpost in Kyiv on Saturday.

Meanwhile, it was clear to Ukrainians that the actual fight — and the blood to be shed defending their homeland — is theirs alone.

“America isn’t here. The European Union isn’t here,” said Alexander, a 24-year-old hotel employee in Kharkiv who declined to give his last name. “So we’re fighting on our own.”

Bulos reported from Kyiv, Chu from London and Kaleem from Los Angeles. Times staff writers Laura Wides-Muñoz in Washington and Leila Miller in Mexico City contributed to this report.