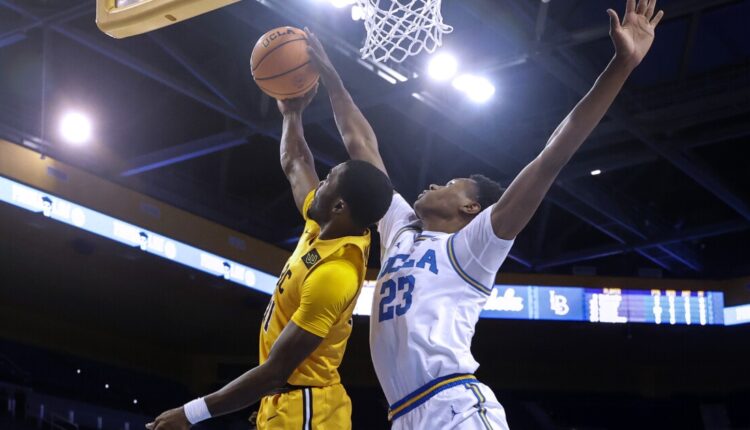 Once or twice a game, Peyton Watson’s high school coach could see the future.

He sized up the opposing player making a move toward the basket and reflexively checked on his star swatter. If Watson was anywhere in the vicinity, Shelton Diggs knew what would happen next.

The coach announced it, in colorful language, to everyone inside the gym.

“I was yelling, ‘Get that s— outta here!'” Diggs recalled this week with a laugh.

Watson almost always complied, using his implausibly long arms to block the shot. It became such a habit that after Watson went from Long Beach Poly High to UCLA, Diggs found himself shouting the same refrain in front of television screens.

It happened again last week. After Arizona’s Justin Kier grabbed a loose ball near the Wildcats’ free-throw line and charged toward the basket with a step on Watson, Diggs volubly predicted the outcome. Watson chased his target and leaped into the air as Kier released the ball, the Bruins freshman unfurling his 7-foot-1 wingspan to maximum effect.

With his right hand stretching nearly halfway up the backboard, Watson rejected the shot. Kier tumbled to the court along the baseline, his conqueror momentarily standing over him with a menacing glare.

The Pauley Pavilion crowd roared. A nickname was born.

Nearly a week after his smothering defense helped the Bruins overtake the Wildcats for the top spot in the Pac-12 standings, Watson was still searching for the creator of the season’s best pun.

“Whoever did it,” Watson said, “hats off to them, great nickname. I approve.”

The block made “SportsCenter” that night while trumpeting the arrival of a 6-foot-8 whirlwind whose impact has far exceeded his modest statistics. It was also something of a warning shot heading into the rematch between third-ranked UCLA (16-2 overall, 8-1 Pac-12) and seventh-ranked Arizona (17-2, 7-1) on Thursday evening at the McKale Center, a reminder of the dangers of infiltrating the area of ​​the court that could be known as Peyton Place.

“That was basically sending a statement that if you’re going to come at us,” Watson said of his signature play, “you’ve got to come correctly.”

Those long limbs are something of a mystery.

Height can be found on both sides of Watson’s family — his father is 6-5, his mother 5-10 — but no one else besides Peyton’s younger brother, Christian, has string bean arms and legs.

Sometimes even Peyton is surprised at what he can do. 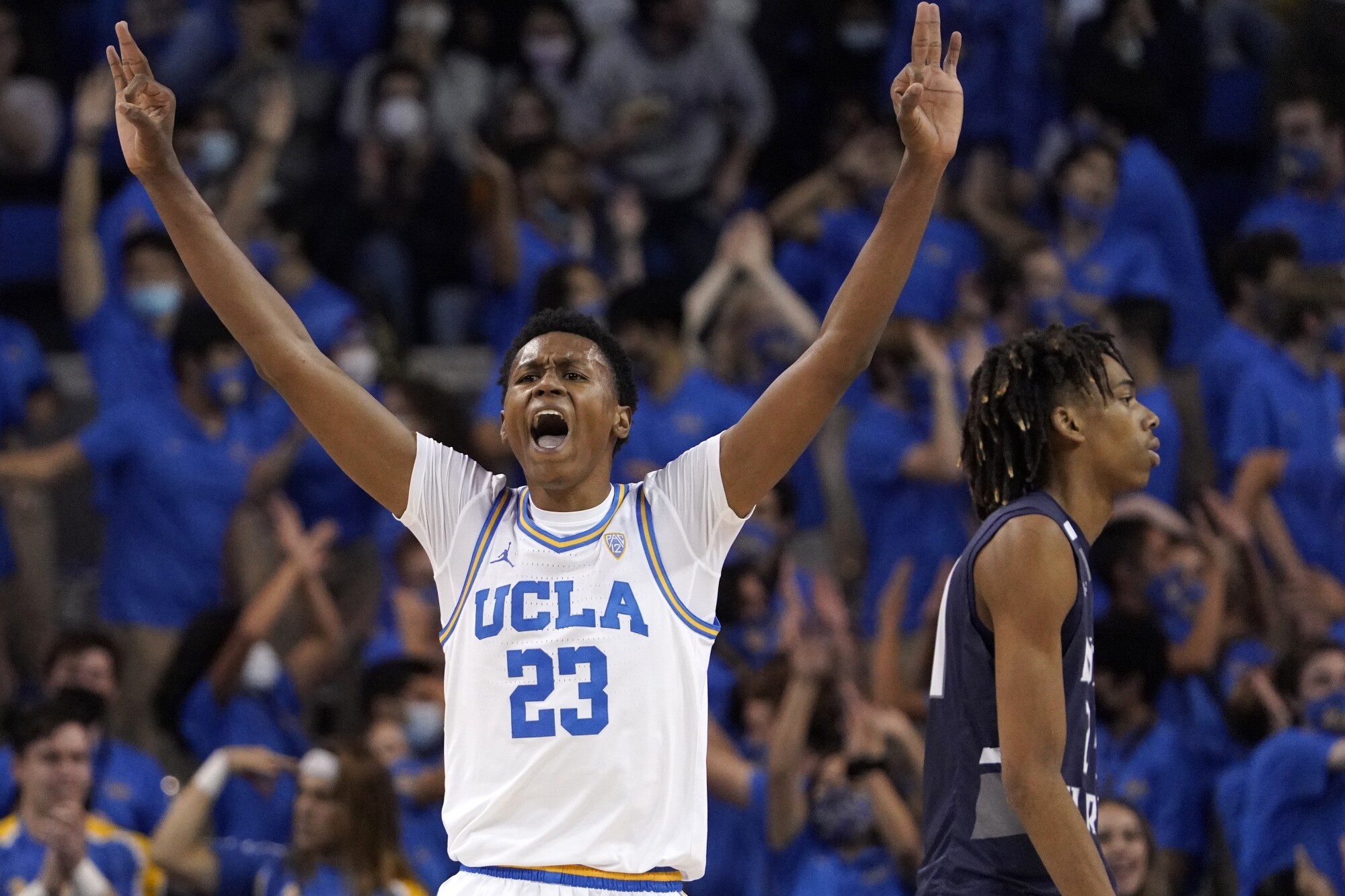 After teammate Jules Bernard missed a spinning jumper in the lane against California last week, the ball caromed wildly off the rim. Racing toward the basket, Watson appeared out of position to grab the rebound before he leaped into the air and snatched it with his left hand. He secured the ball with both hands on his way back down before rising again for a putback.

Ted Robinson, calling the game for the Pac-12 Network, compared Watson’s springiness to jumping on a trampoline.

More acrobatics followed when Bruins guard Jake Kyman threw a fast break lob that soared above the square on the backboard. Watson somehow corralled the ball with both hands before gently laying it in the basket.

“I wanted to dunk it,” Watson said, “but we’ll take the two points.”

It’s no secret that Watson’s offense lags behind his defense and the measurables that have made him an intriguing NBA prospect. He’s averaging 4.3 points per game and shooting 31.8% while making just 20.8% of his three-pointers. But his 13 blocks are second on the team, even though he’s played only 15.4 minutes per game — ninth on the team.

The gap was reflected in one 10-second span against Arizona. After blocking a shot, Watson spotted up for an open three-pointer in transition. The ball sailed over the rim and hit the other side of the backboard before bouncing away.

A heavy influx of points isn’t needed on a team of proven scorers. Watson’s minutes have enjoyed a recent uptick because of his ability to prevent the ball from going in the basket or even reaching half court. Against Stanford, he forced a five-second violation when the Cardinal couldn’t inbound the ball past his leaping body, and he harassed forward Harrison Ingram into an over-and-back violation for another turnover.

“It ignites the crowd, it’s game-changing,” UCLA coach Mick Cronin said of Watson’s impact, “and his playing time has definitely added to our defensive resurgence.”

Watson isn’t the first player from his high school to go on and make iconic plays for the Bruins.

His father, Julio, who also grew up in Long Beach, made sure Peyton knew the name Tyus Edney as soon as UCLA offered a scholarship. Julio gathered everyone in the family room and pulled up YouTube footage of Edney’s baseline-to-baseline layup to beat Missouri in the NCAA tournament.

“I’m very fond of that clip and that game and just how many great things he did here,” Peyton said, “so I’m just trying to follow his lead and continue to put on for the city of Long Beach.”

Like Edney, Watson played point guard for the Jackrabbits. He also wore the same no. 11, though it was a tribute to Watson’s birthday Sept. 11, 2002, not his famous predecessor.

A growth spurt that helped Watson sprout from 6-3 to 6-7 as a sophomore made him a nationally coveted prospect. While UCLA was the last Pac-12 team to offer a scholarship, the Bruins quickly became a front-runner because of their championship legacy, location just up the freeway and Cronin’s reputation for improving players.

The only McDonald’s All-American on the roster, Watson could have easily walked into UCLA’s practice facility with a swagger. Instead, his first act each day was to go around shaking the hands of a different teammate, letting them know he was humbled to join this veteran group that had just gone to the Final Four.

“Peyton is one of the most spirited guys on the team — in the nation, to be honest,” Bernard said. “His energy is amazing. He’s always positive.”

One-on-one battles during practice with junior Jaime Jaquez Jr. Watson showed just how far he had to go after a pandemic-shortened final season of high school in which he played only a handful of games.

“He would punish me with his footwork and his physicality and his pump fakes and things like that,” Watson said, “so he taught me immediately how to become a more sturdy and solid defender, so I actually salute Jaime for never taking it easy on me.”

It wasn’t long before Watson could counter with more than his length and quickness. A punishing schedule that started at 5:45 am ensured that he was improving daily. Mornings included a drive to a gym in the San Fernando Valley for 75-minute workouts. Then it was back down the 405 to UCLA for weightlifting, followed by practice with his teammates and more weightlifting.

The toil is reflected in an increasingly muscular body that fluctuates from 208 to 210 pounds — depending on his diet and cardio workload — up from 193 upon his arrival on campus. His nighttime stretching and foam rolling exercises are overseen by Brantley Watson, a 34-year-old UCLA graduate who’s more like a protective brother than an uncle.

Peyton and Brantley decided to live together in a Westwood apartment after Brantley’s job with Fox Sports was relocated to Century City. He’s getting another taste of college life through his nephew, and sometimes it’s a bit too loud for his liking. About once a day, he has to tell Peyton to turn down his music.

“I think what’s medium volume to him is extremely loud to me,” Brantley said. “I probably know every lyric to every Lil Baby song that’s ever been made at this point.”

Sitting in the players’ family section at Pauley Pavilion, Antoinette Watson was wowed by her son’s block against Arizona, just like everyone else.

She didn’t realize its full impact until the ride home to Long Beach.

Text messages flooded her phone. She got a better look at the play. She couldn’t believe what her son had done.

“I was like, what? This is crazy,” Antoinette said with a chuckle. “It’s on SportsCenter, and they showed it a few times from different angles. So I was like, oh my God, that was incredible.”

Get that s— outta here.