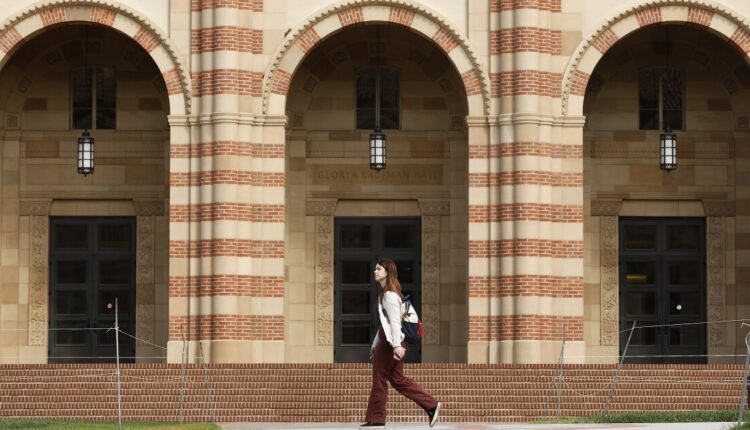 UCLA students held a sit-in Monday to demand more online learning options as the University of California has been plagued by conflicts over distance and face-to-face learning with classrooms reopening amid the ongoing pandemic.

After a largely in-person fall semester, the UC system’s nine undergraduate campuses transitioned to remote classes by January as a precaution against the highly contagious Omicron variant. But the return to mostly face-to-face instruction – fueled by high vaccination rates and signs that the surge has peaked – is far from smooth.

At UCLA, more than 1,300 people supported a petition urging a boycott of Monday’s classes and urging students flexibility to choose between in-person and remote options. Groups representing disability rights advocates, underrepresented students and student leaders banded together to organize a sit-in at the campus administration building, promising to stay the night if administrators fail to meet their demands for online access and educational equity .

In the early evening, dozens of students sat in a hallway equipped with blankets, laptops, and food; Chancellor Gene Block’s office doors were plastered with flyers accusing UCLA of not accommodating black students or people with disabilities.

In a statement, UCLA said it acknowledges students’ concerns, respects their right to speak their minds and is “deeply committed to justice.” The campus returned to in-person learning “based on a careful assessment of the current public health situation, including that COVID-19 cases and test positivity rates are declining rapidly on campus and throughout Los Angeles County, and that many eligible Bruins are receiving the.” have required boosters,” the statement said.

UCLA’s average seven-day case positivity rate has fallen from 8.2% at the start of the winter quarter on Jan. 3 to 2.6% on Jan. 24, and 99% of students, staff and faculty have been vaccinated or received approved exemptions.

Students at UC Davis and UC Irvine are also planning walkouts this week to reinforce similar calls for more flexibility. Some faculty are supportive, including UC Irvine’s sociology department. But others say that expanding both options to all courses without many more faculty members would be a huge burden, since delivering quality online education requires far more than just recording and publishing a lecture.

Meanwhile, campus plans for the return vary widely. UC San Diego allows faculty to remain online during the quarter, while UC Berkeley generally requires full in-person return. UCLA allows two additional weeks of distance learning with a longer duration being considered under certain conditions. Decisions will be made by each campus’ Academic Senate in conjunction with administration, and it’s unclear how many classes will ultimately be at least partially absent.

“It’s a total mess on every UC campus,” said Robert Horwitz, chair of UC’s Academic Senate. “The bottom line is that there is no way campus leaders can enact instructional modality policies without dissatisfying a key group of students or faculty. It’s really not easy.”

Esmeralda Quintero-Cubillan, Santa Barbara Senior in Sociology and UC Student Assn. President, prefer both options. They personally wish for the personal camaraderie they’ve been missing, especially as they prepare for graduation this year. But the UC student leader also wants the ability to switch to remote. Online options allow students to better protect their health, manage their schedules, save on commute time and increase work hours, they said.

“At the heart of the problem is the fact that students have to come back without feeling ready,” Quintero-Cubilan said. “They are almost forced to return without having that sense of security.”

However, UC officials say their campuses are safer than surrounding communities. Vaccination, booster shots, masking, distancing, regular testing and a safety survey are required on campus to check for symptoms of illness before entering the campus.

However, at a meeting of the UC Irvine student union and another system-wide forum organized by disability rights groups last week, several speakers pressed for two options – with some denouncing a forced return in person as “terrible” and “amazing”.

Lacey Wood, a UCI PhD student in sociology, fears exposure because she has two young children and health issues that leave her vulnerable to infection. Other students live with family members who are unhealthy or have been unable to return to California due to visa or travel issues. And some who would like to return say they want to show solidarity with those who aren’t.

Yoseph Ghazal, UC Irvine student body president, said he personally can’t wait to get back on campus. He missed the little moments: hanging out in the cafeteria, visiting student clubs lined along campus paths, impromptu conversations with classmates. But he strongly supports the right of others to make different choices.

“We pay thousands of dollars for tuition and housing, so we should have the right to say how we want to be educated,” Ghazal said.

Her demands were supported by the UC Irvine Department of Sociology. The faculty has committed “as a matter of fairness” to continuing online learning for the remainder of the winter quarter for all students “who determine for themselves that they need such accommodations, no questions asked,” the statement said Department.

UC Irvine Provost Hal S. Stern said the university expects faculty to resume in-person classes, but that department chairs and deans have the authority to decide on appropriate policies. He said adherence to vaccination, testing, masking and distancing protocols on campus has been extremely high and positivity rates for campus tests have fallen to 3% last week from 17% at the start of the winter quarter on Jan. 3. There was no evidence of classroom transmission last fall, Stern said.

“We believe the campus is safe, and we encourage students to participate in classes,” Stern said.

Faculty throughout the system remains divided. At UC Berkeley, which is calling for a full return to in-person instruction for all without specific exceptions, many faculty are “eager to be Zoom-free,” while others are cautious, said James Vernon, UC Berkeley history professor and co-chair Faculty Assn.

“Personally, I believe that campus leaders, who often meet on Zoom or in small settings, should not embark on a huge public health experiment at the expense of students and faculty in crowded and poorly ventilated classrooms if they are not willing to do so unable or unwilling to provide final data (on classroom ventilation standards and transmission) that it is safe,” Vernon wrote in an email.

UC Berkeley executives say they are confident the worst of the Omicron surge is over but acknowledged the differing sentiments.

“We know some of you are nervous about returning to campus. Others of you are frustrated that you are not in the classroom yet. This pandemic has presented a series of impossible challenges with often unsatisfactory responses,” Chancellor Carol Christ and Provost Catherine Koshland said in a campus message last week.

UCLA professor of endodontics Shane White plans to return to full in-person classes Monday and declines to extend online options by two more weeks as his campus policy allows. Distance learning isn’t enough for its courses, such as root canal treatments, which students learn on mannequin heads. 18 months ago he returned to teaching in person in clinics and laboratories while shifting his lectures online.

UC Santa Barbara will allow teachers with children under the age of 5 to continue online classes, and others who have scheduled in-class classes may transition to remote elements up to halfway through the class if they justify the educational value.

At UC Riverside, faculty may request, through the faculty chair and dean, to continue distance learning for the remainder of the winter quarter.

UC Merced is gradually rolling out its return to campus, with all classes fully in-person through February 11.

UC Davis expects most classes to be in-person, but faculty with confirmed COVID-related concerns — such as them or someone they care for — will need to isolate.

Breeze Hernandez, president of UCLA’s student body, who attended Monday’s sit-in, said a faculty member who live-streamed her fall quarter immigration class for those who preferred distance learning did a “phenomenal job” that repeats could be, she said.

But Jessica Cattelino, UCLA vice chair of the academic senate and professor of anthropology, said doing both modes well is a lot harder than it might seem. She said courses specifically designed to be delivered online can be effective, but the emergency switch to distance learning is a different matter altogether.

When she made that switch in the fall of 2020, Cattelino said she significantly revamped her courses. For example, she replaced traditional timed midterm and final exams with shorter quizzes and recorded lectures in 15-minute blocks, in part to address unequal access to reliable internet connections.

In an online world, she had to assume students would share information, so she rephrased questions that would produce writings about personal experiences—but grading took longer. Cattelino also made her lectures asynchronous, with students watching them on their own schedules to accommodate different time zones, but this deprived her of a direct connection to them. So she added an optional live interaction review session, which increased her workload.

“It was important to me to spend time with the students,” she said. “But I didn’t do any research.”

Cattelino said it was time for a serious conversation about the additional resources UC would need to properly deploy dual options. A hasty switch to distance learning during a health emergency won’t do the trick, she said.

“This is not a sustainable model for the kind of quality education that UCLA provides,” she said.