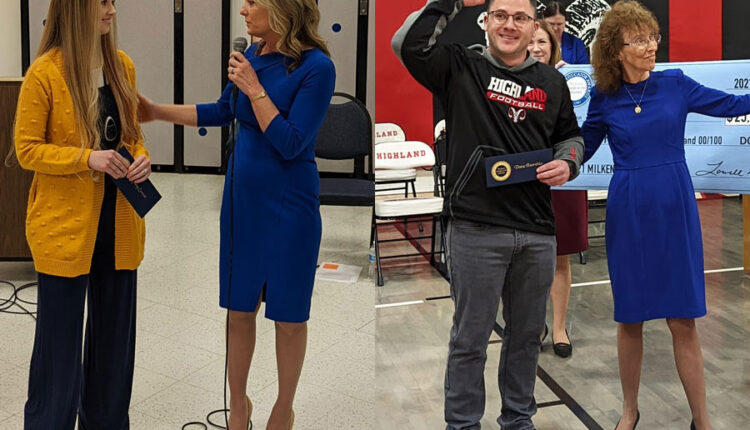 POCATELLO — Two Pocatello/Chubbuck School District 25 teachers were honored at separate assemblies Friday morning. Each received a check for $25,000 and were invited to join a prestigious group of teachers “all-stars” with the Milken Family Foundation.

dr Jane Foley, the Senior VP of the Milken Family Foundation and former recipient of the award, which was in Idaho, from the foundation’s home base in Santa Monica, California, to present the awards to the recipients.

As she told EastIdahoNews.com, the foundation normally names around 30 teachers annually as Milken Educator Award winners. But, due to COVID, it did not do so last year, meaning 60 teachers will be honored this year.

Still, Friday’s recipients, the only two that will be named in Idaho this year, are in rare air, among the nation’s elite educators.

“We haven’t been in Idaho to give the award for a number of years, and we’ve never given the award in Pocatello before,” Foley said. “To be here and have two out of the whole country speaks volumes about the quality of education that is here.”

Lemos and Beorchia receive ceremonial checks from Ybarra, Foley and the principals from their respective schools. | Kalama Hines, EastIdahoNews.com

Recipients of the award are hand-selected by a team at the Milken foundation. There is no application or nomination process, “You don’t find us, we find you,” Foley explained.

Idaho Superintendent of Public Instruction Sherri Ybarra spoke at both assemblies about Idaho’s move from 31st to 17th in the nation in education, pointing to the work of both Lemos and Beorchia, along with their peers, in making that improvement.

“It’s a huge thank you and hats off for the hard work they do, they truly deserve it,” she said.

Ybarra said that her hopes for the coming four years is to move the Idaho education system from 17th into the top 10.

“I’m so excited for all the great work we’re doing and to be recognized by a national foundation twice. We have a lot to be proud of.”

Both teachers were surprised at Friday’s celebrations, told only that a student appreciation assembly would be held in the schools’ respective gymnasiums.

Lemos described the honor as overwhelming and a pleasant surprise, while Beorchia said that the honor had not quite set in 30 minutes after being named an honoree.

As for the award money, both have preliminary plans for at least a large chunk of it.

“I still have student loans, so that’s the first thing I thought of,” said Lemos, who is still paying off the bachelor’s and master’s degrees she earned at Boise State University.

“I’ll probably take my family on a vacation that we haven’t been able to afford,” Boerchia said.

Both will now join Milken Family Foundation’s team of “all-star” teachers, as Foley described it. As part of that team, both will take all expense-paid trips to Santa Monica to consult in the furthering of the national education system.