Trip to Los Angeles ends in a goalless tie 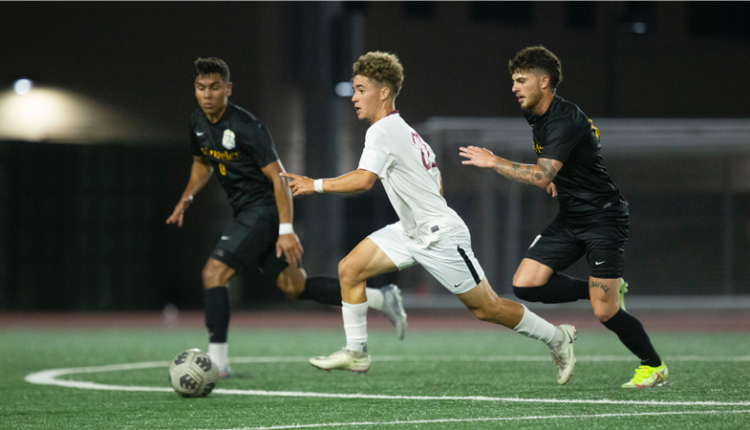 LOS ANGELES, CALIFORNIA – The Azusa Pacific men’s number 7 was unable to continue their perfect 32-game regular season winning streak but remained undefeated after a zero-zero tie in extra time against Cal State Los Angeles on Friday night. The Cougars battled a tough CCAA opponent tonight in a game where each team had a chance of breakthrough but couldn’t quite take advantage of it. This happened to be the second overtime game for any team as the Cougars won their home opener against Simon Fraser in overtime and the Golden Eagles lost in their opener to Simon Fraser.

How it happened: The Cougars had few good chances in the first 45 minutes as they remained goalless and were caught by the Golden Eagles’ offside trap, which left Azusa Pacific offside five times in the first half.

But the Cougars began to take over the game in the second half, in the 60 referees. The Cougars continued to exert pressure, which eventually led to their best chances of the night. In the 72nd minute, after Azusa Pacific’s original corner was partially cleared, defender Leo Tomasi rolled one back into the box, which hit the head of Fritz Oestreicher, only to be stopped by Cal State Los Angeles goalkeeper Alvaro Unanua who kept the game goalless.

In the 77th minute, one of Diep’s four shots from Unanua was saved fairly easily, while David Kwinn had a chance to be the hero in the 81st minute, but his attempt only sailed over the bar.

Both teams created opportunities during extra time, but none greater than a 109th-minute goal from Orlando Lozano, just inches from the golden goal for Azusa Pacific. Lozano was substituted on for a cougar corner, but found himself with a shot in the 18-yard space on the half-volley that hopped in the woodwork and stayed out of the net.

By numbers: The cougars improved theirs unbeaten Regular Season Streak on 33 games, although the regular season was canceled with 32 games to win Strand. Azusa Pacific had a 16-8 lead in shots throughout the game, including a 7-1 cross in the second half.

Story: The Cougars were number one in the West Region in 2019, while Cal State LA was second seed and the Golden Eagles led the table to the national championship, where they eventually lost 2-0 to Charlestown. The two programs last met in 2018, when the Cougars defeated the Golden Eagles 1-0 in overtime in an NCAA Division II playoff game in Azusa.

Next: Azusa Pacific will face another CCAA opponent next Wednesday September 15th in Cal Poly Pomona. The kick-off is at 7.30 p.m. at the Cougar Soccer Complex in Azusa, California.