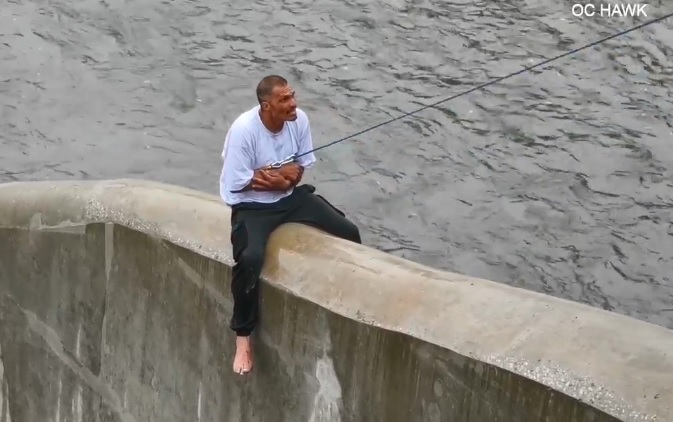 Recently, we learned that a homeless man assisted our neighborhood group over the course of a year passed away alone under a bridge along the LA River headwaters. We knew him as Eduardo-Enrique, a 41-year-old immigrant from Peru, who had fallen on hard times but hoped for a normal life.

As LA River Walkers and Watchers (LARWW), we are a group of neighbors that volunteer to clean the river at its headwaters and adjacent bike path. We meet monthly for our clean ups and every time, come into contact with people living unsheltered. Our greatest concern and fear from the moment we met Eduardo-Enrique was that he would perish on the LA River. That fear came true.

Eduardo-Enrique was clearly ill. He was suffering from severe incontinence, diabetes and drug addiction, among other affections. He could hardly move, let alone walk and was dying, but there wasn’t a system of support to help him through health and recovery.

Nothing had come through for him, nothing had gone right. A year ago, he’d given up on life and said that he was waiting for death on the bike path along the river. He said that he would die there, and sadly, he was right.

In regular visits with him, he shared that he’d once been a graphic designer and it was something he would love to do again. He treasured the few art supplies he owned and showed a series of beautiful drawings he’d made. He also said he wanted to see his little girl who lived nearby. With continued advocacy, our collective efforts got him into a cabin community. Our volunteer group talked about sponsoring him for art supplies and whatever he needed. We saw him a few months later and he looked good … but the addiction was stronger than the progress he was making. He left the cabin for personal reasons and was back on the river in squalor and using drugs.

A few weeks before his death, we visited him during our monthly cleanup. By then, we could see that Eduardo-Enrique had lost hope. He was emaciated, worn, living in terrible conditions and with failing health. He told us that people went to the river to die. He said it was the lowest place people in his condition would go to. We both agreed to follow up with him, but he died before we could.

We wish there was a system in place to provide the speedy trauma informed assistance that Eduardo-Enrique, and that we as a caring community needed to help him.

Over the course of five years, we’ve continuously expressed concern that the area is largely “out of sight and out of mind” for the County, LA Homeless Service Authority (LAHSA) outreach teams and all those who have been given the responsibility to care for our homeless. The 48-mile LA River is in multiple jurisdictions. No outreach team is specifically assigned to the headwaters in our area. Though our headwaters section has fewer unsheltered people than some areas downstream, the need is still urgent.

Locally, we made the river a priority and personally clean and reach out to the people taking shelter on our river. But mental health, public health, and substance use treatment and the support that people need are beyond the capacity of our neighbors and city councilmembers. Trained dedicated professionals are needed to address the trauma and unique health needs of people who call the LA River home.

We all wanted what was best for Eduardo-Enrique — a safe place for him to live where he could receive the support needed to thrive. The cabins were a start but not enough. We need a dedicated team committed to providing triage for people like Eduardo-Enrique, and others like him. While LA County controls the funding for health, drug addiction and mental health programs — the problem is bigger than the county alone can handle.

In 2022 a new County Multi-Disciplinary Team and a San Fernando Valley Community Mental Health Center team will begin working in the Third District to provide help for people in need. These teams can each realistically only focus on a few people at a time, as they serve the entire ten mile wide stretch along the River.

Sadly, there are too many Eduardo-Enriques out there. The river’s headwaters have become an area where drugs are sold, bought and consumed, and where homeless people die — all out of sight and out of mind. We cannot continue to point fingers at others, avoiding responsibility for what takes place at the river’s headwaters . We need more immediate solutions.

May you rest in peace, Eduardo Enrique.

Evelyn Aleman is a community advocate who resides in Reseda and is a member of the volunteer group, LA River Walkers and Watchers.