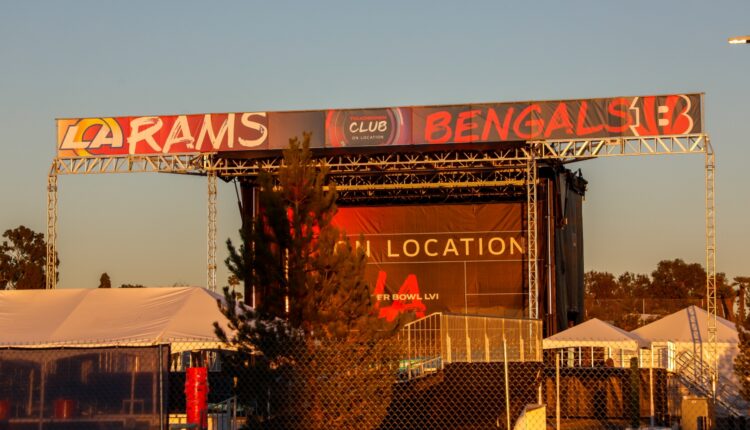 LOS ANGELES (CBSLA) – The Super Bowl could be played in unusually warm temperatures this coming Sunday as high heat descends on the Southland.

A general view of a stage set up in conjunction with Super Bowl 56 outside SoFi Stadium on Feb. 7, 2022 in Inglewood, Calif. (Getty Images)

The National Weather Service has issued an excessive heat watch from Wednesday morning through Friday evening for much of Los Angeles County, including the San Fernando Valley, Beverly Hills, Pasadena and Pomona.

Temperatures could hit 90 degrees, the NWS said. Daily records could be broken.

“It’s a whole lot better than the 17 degrees we left behind,” Tanya O’Rourke, a news anchor for WCPO-TV in Cincinnati, told CBSLA Monday after arriving in LA “Hotter than we expected too. I guess I don’t know that I packed quite well for this. Because when you’re in 17 degrees, you can’t fathom again what 80s feels like.”

Kickoff between the Los Angeles Rams and the Cincinnati Bengals is scheduled for 3:30 pm Sunday. CBS2 Meteorologist Amber Lee forecasts that temperatures at kickoff will be around 85 degrees. They will drop to around 78 degrees by halftime.

“If you’re heading out to SoFi Stadium, and you’re gonna tailgate around noon, temperatures are nice and toasty in the mid-80s,” Lee said Tuesday. “And then at kickoff, at 3:30, it’s still gonna be in the mid-80s. As the game goes on, that’s when temperatures begin to slide a little bit more into the mid-70s, but still comfortable.”