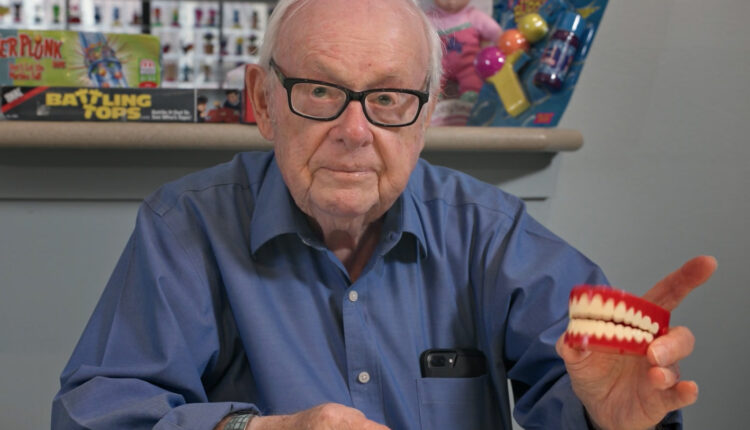 Eddy’s World: Designer Eddy Goldfarb with one of his 800 creations.

Of special note from this year’s Jewish film festival: a trio of uniquely personal biodocs.

What a joy! We open in Eddie Goldfarb’s kitchen, the 98-year-old toy inventor at play with one of his 800 creations, that childhood perennial the bubble gun. The frenetic energy displayed by the solar-powered toys that line the window looks pretty low-wattage when compared to our industriously prolific Geppetto. His first three toys were conceived aboard a Navy sub. Back home, he found work designing cereal box premiums. (The Roy Rogers quick shooter has must be seen to be believed.) Starting with Ker-Plunk, Goldfarb found great success in mechanical games that came with built-in gimmicks. He frequently teamed with well-known toy manufacturers, but among all the inventions on display, there’s nary an established character in the bunch. Why give Bugs or Mickey a cut of the royalties when patentable Chattering Teeth and Stomper Cars foot the bill? (That particular four-wheeler holds the record for his most successful toy.) He still drives, still inventors, and remains the talk of his retirement community. And don’t forget his loving daughter, Lyn Goldfarb. She directed. Streams as part of the Joyce Forum Short Film Festival.

“All great art has some element of humor to it.” These words to live by come from art collector and publisher Peter Brandt after he’s asked to boil down Kenny Scharf’s appeal. Sharp was a child of television cartoon culture, equal parts Bob Clampett’s Wackyland and what he liked to call “Hanna-Barbarism” mainlined through a pinball machine, never tilting under the force of its own illogicality. Sharp came of age in ’60s suburbia, the San Fernando Valley to be specific, and the ever-present pop plasticity surrounding his bringing up ropes the viewer in like a neon lasso. A student of Andy Warhol’s propensity for making fun of art, Scharf was grouped with two other Factory prodigies: Jean Michel Basquiat and Keith Haring. A firm believer that art exists outside museum walls, his top priority has always been making art accessible. He’s been labeled a “street artist” and a “graffiti artist,” but his unwavering ability to stick to his own set of ground rules rockets his work beyond the realm of classification. Once a major force in the New York Arts scene, he has since migrated West, and that’s where filmmakers Max Basch and Malia Scharf​​ find him. A fountain of productivity, he finds inspiration while vacationing in Brazil, combing the beaches for what he deems the best garbage in the world. If life means living for the moment, Scharf wants every moment to be fun. Perhaps it’s his devout adherence to Peter Pan Syndrome that keeps the smile on his face.

Before Dr phil, dr Drew, and Dr. Laura began her careers as radio and TV advice dispensers, Ruth Westheimer was the pioneering therapist with whom Americans were familiar on a strictly first-name basis. Who better to broach the subject of sex in graphic yet straightforward and wholly non-threatening terms than someone resembling your grandmother? Therein read the key to Dr. Ruth’s success. Orphaned by the Holocaust as age 10, the 90-year-old, thrice-wed, inexhaustibly upbeat media sensation put her celebrity to good use, first by advising her audience on how to overcome personal feelings of sexual inadequacy, and later by dispelling myths about the AIDS virus. She laughs off being labeled a feminist, but when pressed by her granddaughters, the only objection to the characterization she can come up with is an aversion to the arcane habit of bra-burning. But as much as I desire to laud the subject, there is one major flaw in director Ryan White’s portrait of her: the reliance on animated passages to take us through the Nazi occupation was one big, sentimentalizing mistake.