Thousands to march for abortion rights in LA, across US 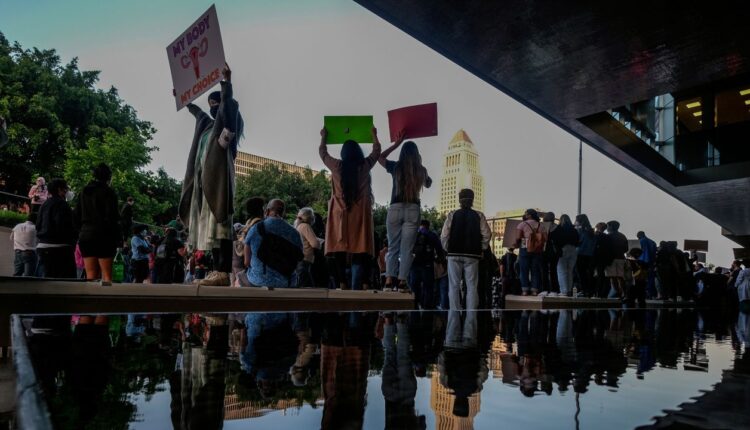 LOS ANGELES (CNS) — Thousands of people are expected to take to the streets across the Los Angeles area Saturday as part of a nationwide effort to protect abortion rights as the Supreme Court appears poised to overturn the landmark abortion rights decision Roe v. Calf.

The Women’s March Foundation says it has received more than 50,000 signups for the “Bans Off Our Bodies” rally at 10 am outside Los Angeles City Hall.

The rally, which has been planned for months, gained a new sense of urgency at the beginning of May following a leaked Supreme Court draft opinion written by Justice Samuel Alito that revealed the court privately voted to overturn Roe v. Calf.

Rallies are planned across the US, including several locally:

In Orange County, organizers are expecting between 4,000-5,000 attendees at a 10 am rally at Centennial Park in Santa Ana. Speakers will include Lt. gov. Eleni Kounalakis and Rep. Katie Porter, D-Irvine.

Concurrently, the group Rise Up 4 Abortion Rights has protest rallies scheduled for 41 US cities, including two in Los Angeles, and one in Orange County.

In each case the Rise Up rallies will include a march to join “Bans Off Our Bodies” events nearby.

The Rise Up rallies are set for:

If the Supreme Court’s decision does become final, it would strike down one of the most debated Supreme Court rulings of the past century. However, despite some vocal opposition to Roe v. Wade, the ruling establishing women’s access to abortion is supported by a majority of Americans.

A CNN poll conducted by SSRS in January found that just 30% of Americans supported the Supreme Court completely overturning Roe v. Wade, while 69% opposed it.

CNN reported that the poll’s finding was consistent with other recent polls and historical trends, and that since the network began polling in 1989, public support for completely overturning Roe has never gone past 36%.

Roe v. Wade guarantees abortion rights throughout the United States until a fetus is viable, typically between 22 and 24 weeks. Overturning the decision would strip away federal protection of abortion rights, and leave it up to individual states to set abortion policy.

Famously liberal California is unlikely to take steps to ban or limit access to abortion, and discussions have already been under way about using the state as a safe haven for women across the country to pursue reproductive health care.

gov. Gavin Newsom; Senate President pro tempore Toni G. Atkins, D-San Diego; and Assembly Speaker Anthony Rendon, D-Lakewood; have voiced support for creating a constitutional amendment in California to guarantee the right to abortion in the sate. Newsom has also proposed expanding access to abortion services, including by covering uncompensated care for people who don’t have insurance that covers abortions.

“California will not stand idly by as extremists roll back our basic constitutional rights; we’re going to fight like hell, making sure that all women — not just those in California — know that this state continues to recognize and protect their fundamental rights,” Newsom said.

The US Supreme Court decision stems from the Mississippi case Dobbs v. Jackson Women’s Health Organization. In a challenge to Roe v. Wade and Planned Parenthood v. Casey, Mississippi passed a law in 2018 prohibiting abortions after the 15th week of pregnancy.

Mississippi’s abortion law followed a strategy by anti-abortion groups to ban abortion after they claim fetuses experience pain, according to The Washington Post. However, most research says fetuses do not experience pain until 29 or 30 weeks into the pregnancy, the newspaper reported.

L.A. on the Record: Let the mayoral ad wars begin