The Woolsey Fire burned down their homes. Now this community has its own fire department | Forest fires There’s only one way into Bell Canyon and one way out.

But even the hills of Bell Canyon are ready to burn. Blackened trees and melted trash cans can still be found here, relics that commemorate the 2018 Woolsey Fire that ravaged the region and claimed 1,500 buildings — including dozens in Bell Canyon — and three lives.

Residents say the threat of another disaster lingers in their minds every time dry winds blow through the canyons. That’s why Bell Canyon took matters into their own hands. In 2020, they formed their own fire department staffed by community members. What began as a group of renegade residents has now grown into a highly organized and trained team.

Some were heartened after staying behind to fight the blaze with garden hoses as Woolsey rained down on the community. Others were intrigued by the opportunities to learn emergency procedures. Most are in their mid-50s and many had no previous firefighting experience. But everyone – whether lawyers, creatives or engineers by day – is now ready to show up when it counts.

Garrett Clancy, the chief of the Bell Canyon Fire Department, is a filmmaker with military emergency response experience and sees the crew as the Minutemen in the Revolutionary War. “We’re going to do something — we’re not just going to sit around,” he says. “Because this is our home. That is why we are willing to take any risk.” 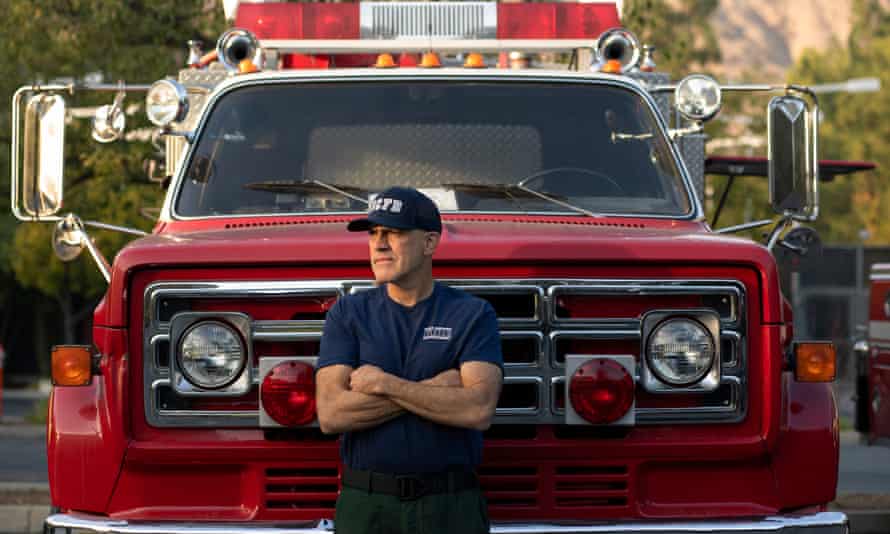 Clancy is aware that her role is secondary to that of the county’s emergency response teams. But as fires continue to increase in intensity, severity and frequency, firefighters are becoming overwhelmed. Now more and more individuals and communities are taking protection and prevention into their own hands.

“With some of the tragedies we’re witnessing in California, a local fire department doesn’t have the resources and they have to figure out what to save and what to burn,” said resident Greg McHugh, who is leading the community’s fire safety efforts . “Unfortunately, that’s the truth – and you have to help yourself.”

For neighborhoods like Bell Canyon, the proactive approach is also aided by prosperity. A CalFire affiliate Nonprofit committed $1.3 million in 2021 to support risk reduction projects, with a particular interest in helping vulnerable communities. But both Bell Canyon’s volunteer department and its Fire Safety Council, a group led by McHugh that educates the public about protecting their homes from fires, have benefited from wealth within the community.

The local homeowners association has donated about $25,000 towards the new fire department, and neighbors have donated hundreds of thousands more. Areas with fewer resources are likely to face greater obstacles that set them apart from their wealthy neighbors and add to the divide already felt in disasters.

“A significantly less affluent community without a homeowners association would need to find a fiduciary sponsor,” McHugh says, advising those communities to seek help from legal aid offices to obtain their own risk-mitigating fire safety council.

“First to the scene, last to leave”

The crew consists of 16 members. They have purchased three trucks, over a mile of hoses and communications including radios at each member’s home. They regularly conduct exercises from Bell Canyon’s Equestrian Center.

There is a joke in the department that they only bought their first fire truck after a member got drunk and bought it on impulse. Clancy recalls getting the call and suddenly the small burgeoning department was much better resourced. “That was the catalyst for a big step forward,” says Clancy. 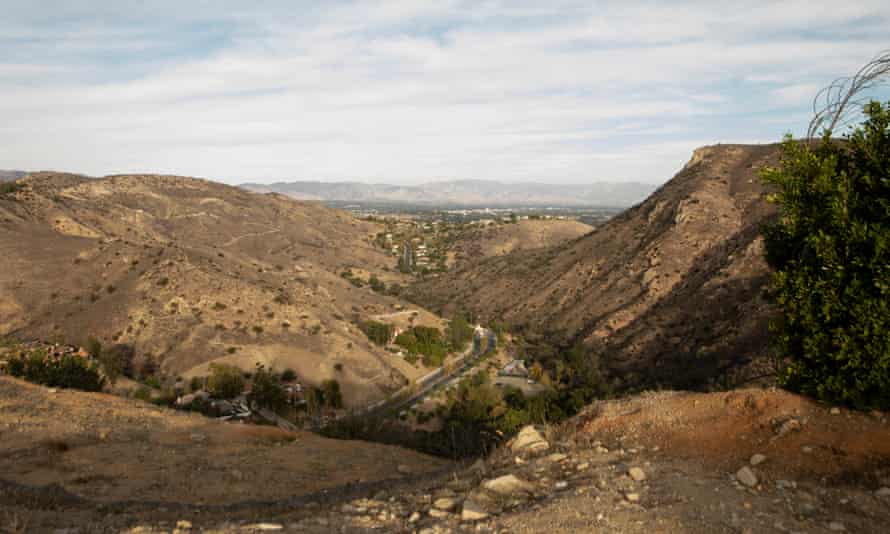 Residents say the threat of another disaster lingers in their minds every time dry winds blow through the canyons. Photo: Gabrielle Canon/The Guardian

Some members also have official emergency response experience, including Boris Donia, who grew up in Bell Canyon and is the youngest of the crew at 24. Trained as a wildland firefighter, Donia was instrumental in teaching them how to use the equipment and connecting them to training opportunities. Clancy asked him for help with her first truck.

“They had no idea how to operate it or how to pump it,” says Donia. He now serves as Deputy Director.

Even those unable to fight fires can help, like 82-year-old Len, one of Bell Canyon’s longtime residents, who maintains the vehicles and outfit the trucks with parts made at a machine shop in his garage were manufactured.

The crew has not yet fought a large fire. But it has rendered other services. There have already been almost 100 calls for help. They have relocated rattlesnakes (a common complaint), helped with torrential rains that caused mud and flooding, and were first on the scene when an elderly man fell off a cliff (the man survived).

I feel like the crew we have now could have stamped out the spread of the Woolsey fire. Ashley Forchelli

“People in the community seem grateful that we’re here,” says Chief Clancy. “We do all the things you could call the regular fire department for.”

Clancy notes that it takes the county fire departments an additional 10 to 15 minutes to reach the community gate and an additional 8 minutes to get to the farthest homes in the canyon. Clancy prides himself on his team acting quickly. “We’ll be there in a few minutes,” he says.

“Our motto is: first on site, last to leave,” says Donia about the volunteer crew. “In the event of another Woolsey fire or other small bushfire, we’re here for our community,” he adds. “We took the time to get to know the canyon inside and out.”

“Now we know what to do”

The crew have been helping residents – both old and new – feel more secure despite the increasing risks.

“I don’t remember always living in fear when the wind was blowing,” Ashley Forchelli says of her reality after the horrific Woolsey fire. “But I feel like the crew we have now could have stamped out the spread of the fire.”

Forchelli said residents who stayed behind to help fight the Woolsey fire were able to spare some homes, but without proper equipment and training, they did so “on a wing and a prayer”. “Now people feel almost ready. Like, bring it. We know what to do. We have gear, we know who to call.” 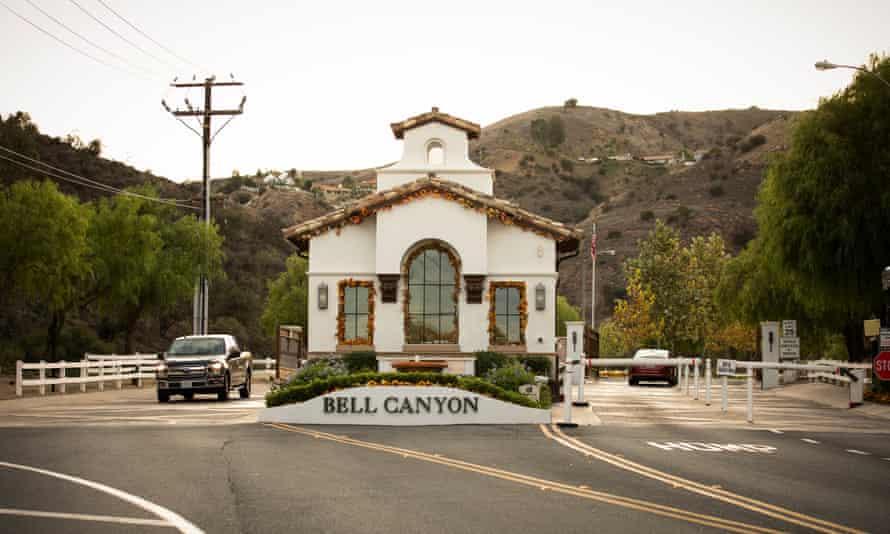 The entrance and exit to the community of Bell Canyon. Photo: Gabrielle Canon/The Guardian

Jane Staley was among the most vocal residents in support of the crew. The house where she lives with her husband and where she raised her children was damaged but not destroyed during the 2018 fire. They’ve spent years rebuilding, but desperation and fear still hold them tight.

“The sense of helplessness was so extraordinary,” she says, recalling the fire and smoke filling the sky and the sleepless night she spent in a nearby McDonald’s parking lot. “Now that I’ve rebuilt, I don’t know,” she says. “Next time I’m going down with the ship.” But she adds with a smile, “I feel like now, wherever I am, I can reach out to Garrett and he’ll give me the update.”