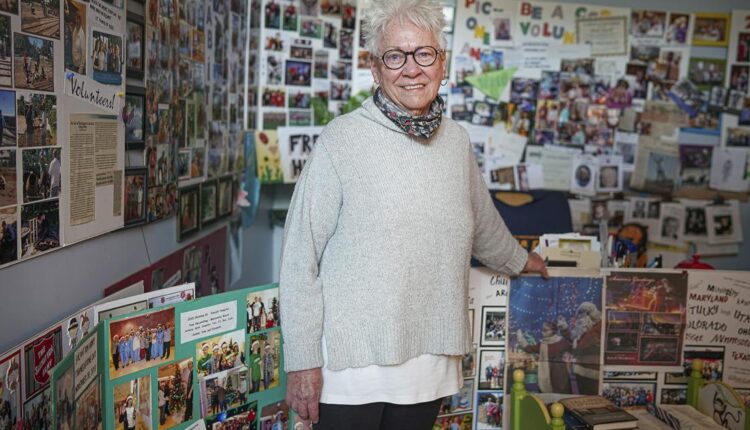 Then-Santa Fe Fire Chief Paul Babcock walked into Christ Church Santa Fe one day last summer, rattled a bunch of keys and told Joni Brenneisen she could have them.

“He gave me Fire Station No. 6 as a gift,” said Brenneisen, who works from the defunct station to organize community outreach programs — including food and clothing for those in need, sleeping bags for the homeless, running shoes for Native American children, and backpacks full of school supplies for students .

Brenneisen, the church’s faithful presence coordinator, can use any space she can muster. The needs are great and the energy required to meet them is considerable. But friends and colleagues say what sets her apart is her ability, a tireless work ethic and an uncanny way of forging connections with people who can help.

“She’s among the first to understand the needs of the church,” said John Standridge, associate pastor of the church. “She is a true master of relationships.”

Church help has made a difference, she said.

“Anything we ever need, we always turn to Joni,” said Kitson, 44, who receives warm clothing and packed lunches from Brenneisen and her team to distribute to those in need.

Kitson said Brenneisen is one of the most determined people she knows. “She shows her love for God by serving this community,” she said. “And she makes a tremendous impression.”

Brenneisen, 75, said she began her work at Christ Church as a youth leader about 15 years ago. After nearly a year in that role, she became the Church’s Faithful Presence coordinator, organizing volunteers to help meet the needs of the community.

Brenneisen also brings food and monetary donations to families through the public schools, said Jeff Pinkerton, an instructional support specialist for Santa Fe public schools. During the summer, she got the district superintendent to loan the church a bus so volunteers could go to city parks and distribute snacks and drinks.

“It just goes on and on and on — the number of things she’s done,” Pinkerton said. “Joni grew up where communities cared for each other. She’s always embraced that policy — that as a community we should help one another, without judgement, without reservation.”

Brenneisen was born in Doylestown, Pennsylvania, 25 miles north of Philadelphia. Her mother, Louise, was a nurse and her father, Edward, was an elevator inspector.

He used to tell her, “If the police lock you up, you stay the night.”

She left Santa Monica for Santa Fe in 1983. She and her husband, Vic Brenneisen, owned three card and gift shops in the city for 25 years.

“I hired almost every kid in Santa Fe who was 15. They had to bring me their testimonies, and if they failed, they couldn’t work,” Brenneisen said.

After her retirement, Brenneisen began her work at Christ Church on Don Gaspar Avenue in Santa Fe, which is part of the Presbyterian Church of America.

“She has a very big heart and really, really cares about the homeless,” Archuleta said.

Brenneisen and Christ Church team up with the Santa Fe Police Department and create care kits that include a bottle of water, toothpaste, a toothbrush, socks and pre-packaged groceries.

“People are very resourceful — especially those struggling with homelessness,” said Associate Director Benjamin Valdez. “They share their stories of how they preserved these items for days.”

He said the outreach helps show the community that police officers care about them. But more importantly, it creates confidence that if a homeless person becomes a victim of a crime, they can report it to the authorities.

“She just believes in what she’s doing — in helping others,” Valdez said.