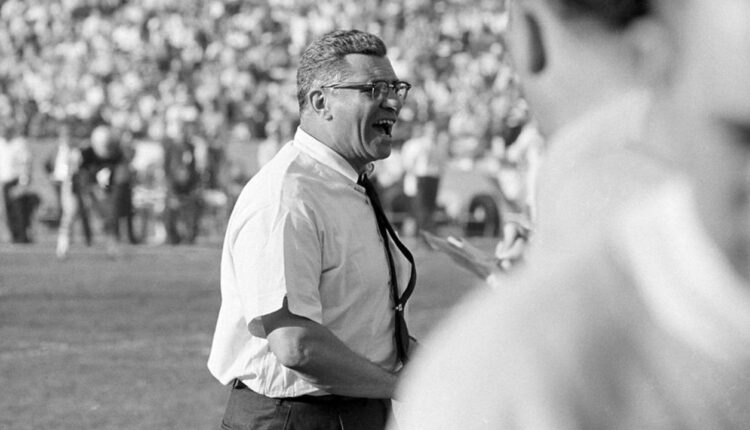 Hunt agreed, telling the NFL commissioner that they could certainly think of something better than calling it the Super Bowl.

Thus, the first edition of what has become the pinnacle of sports spectacle for much of the world was officially dubbed the AFL-NFL World Championship game by the leagues involved when Vince Lombardi’s Green Bay Packers took on Hank Stram’s Kansas City Chiefs on January 15, 1967 met , to a less than sold out crowd on a sunny Sunday at the Los Angeles Memorial Coliseum.

Reporters, fans and many other footballers were already calling it the Super Bowl, much to Rozelle’s dismay. Two years later, the sport relented and officially adopted the name for the event, which has already grown into the socio-cultural behemoth it is today.

But the first Super Bowl had a fraction of the pomp and circumstance that currently surrounds this week-long celebration of football, fandom and consumerism.

The Super Bowl grew out of the merger agreement between the NFL and AFL in June 1966. As part of the agreement to merge the leagues over a period of several years, they agreed to play their respective champions in a title game.

But the decision makers didn’t yet grasp what they had created: The championship game was largely an afterthought in the complicated, emotional fusion. The leagues only settled on Los Angeles as the venue for the game on December 1, 1966, and the leagues did not even decide when it would be played until December 13.

After Green Bay beat Dallas and Kansas City to secure their spots at Buffalo, the pressure in the first Super Bowl was squarely on the Packers’ shoulders. This is due to the firm belief around the sport and in the media that the players, the competition and the top teams of the staid NFL were superior to the product of the rising star AFL, which turned professional football with its courageous actions for top athletes into a chaotic business had transformed their exciting game to play.

These notions were thoroughly debunked two years later by Joe Namath’s New York Jets and rendered obsolete by the merger two years later. But Lombardi and Green Bay knew every other NFL team was counting on them to maintain the league’s perceived dominance.

Lombardi felt it: Frank Gifford famously remarked that Lombardi was “trembling like a leaf” during the broadcaster’s pregame interview with the Hall of Fame coach.

What is now the most coveted property on North American sports television was broadcast by both CBS and NBC in 1967. According to contemporary reports, the stations paid about $1 million each for the rights and sold commercials for up to $85,000 a minute to an audience of more than 50 million. The NFL still insisted on blacking out the broadcast within 75 miles of the Coliseum, meaning the Los Angeles area mostly couldn’t see it without a ticket.

And while SoFi Stadium will be packed to capacity later this month, the first Super Bowl wasn’t a sell-out with just about 62,000 fans in the 93,000-seat Coliseum. That’s understandable: the TV blackout offended some football fans, while many local fans took issue with the $12 price tag for top seats. Yes, twelve dollars.

The halftime show at the Coliseum featured the Anaheim High School drill team along with the University of Arizona and Grambling State bands. The crowd also cheered two men with hydrogen peroxide jetpacks who flew 100 feet in the air and landed in midfield before the show climaxed with the dropping of thousands of helium balloons and hundreds of pigeons.

With each team using their respective league’s official football on offense, the game itself wasn’t exciting, but it was still a fairly entertaining display from two offenses led by future Hall of Famers Bart Starr and Len Dawson.

With clear skies and temperatures hovering in the 50s, the underdog Chiefs held on to Green Bay in the first half and held it late into the second quarter when Jim Taylor’s TD run put the pack ahead to stay.

The Chiefs did well to represent themselves and their much younger league, but the first Super Bowl belonged to the Packers and their famous coach. The win cemented the Kleinmarkt-Packers’ reputation as a legendary footballing institution, a symbol of excellence and hard work under Lombardi’s illustrious command.

“Kansas City is a really strong football team, but I don’t think they’re one of the top teams in the National League,” Lombardi said afterwards. “I don’t think they showed us anything other than what we expected.”