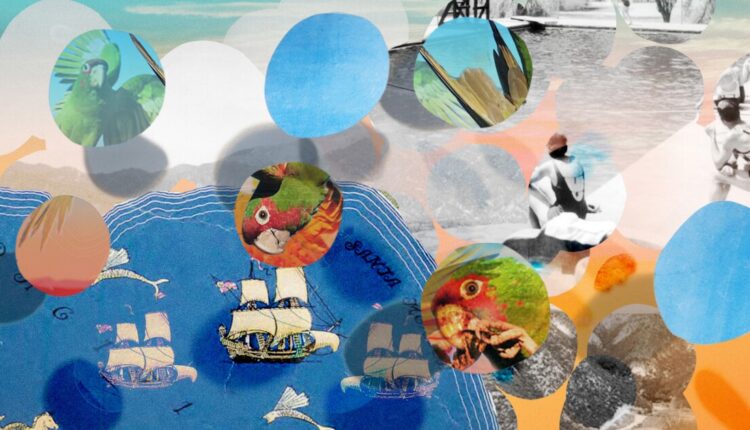 “Elemental LA” is an exploration of Angeleno’s “sense of place” using the four classic elements – air, earth, water and fire – as guidelines.

The air of Los Angeles has always been a controversial, turbulent, and magical territory. Artists, filmmakers, writers, environmentalists and scientists have found both inspiration and conflict in its thickness, refractions, particles and luminosity.

In early October 1542, Juan Rodríguez Cabrillo saw the Los Angeles Basin for the first time when he was looking over a plain that led to a hill line parallel to the course of his three ships. What he remembered afterwards – what became his logbook entry – was the layer of haze that hung over the plain. As his ships cruised northwest against the persistent onshore wind, Cabrillo named the place where he left the Bahía de los Humos – Bay of Smokes. The only element that defined this place for its first European observer was in the air of Los Angeles.

Four hundred years later, the Plains Anglo occupiers speculated that the indigenous communities’ cooking fires or their deliberate burning of the dry autumn grass were causing the lingering haze. But maybe Cabrillo only saw the layer of ocean lingering in the coastal air.

Cabrillo came in search of golden myths – the Amazon island, the seven cities of Cibola, a northwest passage to the Atlantic – none of which were under the thermal inversion that would one day produce photochemical smog. Cabrillo brought nothing to Los Angeles but dreams. They were as durable as the inversion layer.

The air of Los Angeles was once magical. “Vegetation dries up before it dies and almost never seems to crumble. Meat floating in the air dries up, but never rots, ”wrote Benjamin Truman in“ Semi-Tropical California ”(1874). “The air, when inhaled, gives the individual a stimulus and a vitality that only such a pure atmosphere can ever convey.” So pure that lightning and thunder were unknown.

This air – with the advice of a doctor – could cure specific ailments, emphasized doctors Widney, Orme and Lasher in their 1874 report to city business leaders. Malaria sufferers were advised to live on the beach. Asthmatics would find the air of the local tar pits or mountain pines as beneficial. Cases of “nervous exhaustion” would be cured by living outdoors (which also relieved bladder and kidney problems, and the effects of arthritis and rheumatism).

Los Angeles at the end of the nineteenth century was so much “the sanatorium of the Union” that the foothills above Glendale and around Sierra Madre and Altadena were overcrowded with sanatoriums, and the Chamber of Commerce feared that Los Angeles had become the place where the invalid waited to die in the pure air and the eternal sun. 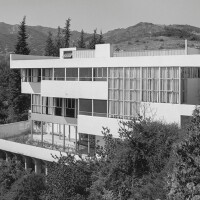 Information is in the air. The invisible wildfire in an arroyo at the foot of the hill is revealed in the oils that the burning chaparral evaporates: aromatic sage and creosote, woody manzanita and chamois. The rewilding in the suburbs is reported by the mercaptan stench of an excited skunk. If the light, honeyed scent of jacaranda follows you, it must be April. And when the flowers have drifted a few weeks later, they smell earthy and loamy. Summer is the scent of jasmine: pink, star and night bloom so intoxicatingly that you can be drawn into the house on warm evenings.

Spring used to smell of orange blossom, a sweetness that promised more than Los Angeles delivered. The February mornings smelled of crude oil that had burned in smeared pots all night to keep the oranges from freezing.

Chandler Burr, who writes for GQ magazine, says Los Angeles smells like a mixture of eucalyptus, jasmine, diesel exhaust, and asphalt. Honeysuckle should be added to the mixture, as well as brine and seaweed if the ocean layer gets inland. The smell of Los Angeles, says Burr, is “like the intoxication of a drug”.

A company called Homesick makes scented candles that are meant to remind people of certain places. Her scent from Los Angeles is orange, bergamot and rose with notes of lemon, jasmine and musk. 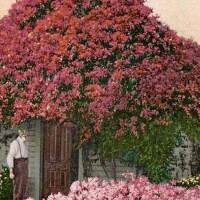 What’s that sound? It is the voice of the trafficked migrants who were transported from Tamaulipas and San Luis Potosí. It is the sound of a parrot pandemonium. On the run from bird smugglers or (some say) from a burning pet shop, the parrots have lived here since the 1960s. The Miter Parakeets of Belmont Shore and the Red-crowned Parrots of South Pasadena are the most fully naturalized. A flash of green, as if scraps of jungle had appeared between the jacaranda blossoms. Social bickering is in the air.

Cities have a characteristic soundscape. Sprawling Los Angeles has a symphony of it. Not just native birds in non-native trees, but classic Motown from a Harley stopped at a red light, the rumble and hiss of surf on a Malibu beach, the unexpected volume of tires on asphalt shortly after rain, the ominous rustle of eucalyptus leaves the surveillance drone of another police helicopter in October.

LA Listens ethnomusicologist Umi Hsu and neighborhood organizer Shmueli Gonzales walk down Cesar Chavez Boulevard in Boyle Heights, and what they hear is illuminating. Hsu hears “sporadic clattering noises from objects loosely positioned on the back of a metal collection truck, construction workers shooting and singing to ranchera ballads during residential renovations, all against the constant hum of high-speed traffic on Interstate Highway 5. These noises Tell … a little bit about the existence of the informal metal recycling business, the recent economic development in the neighborhood that threatens displacement for some residents, and the memory of the multiethnic neighborhoods that were destroyed by the highway construction in the 1950s. “ 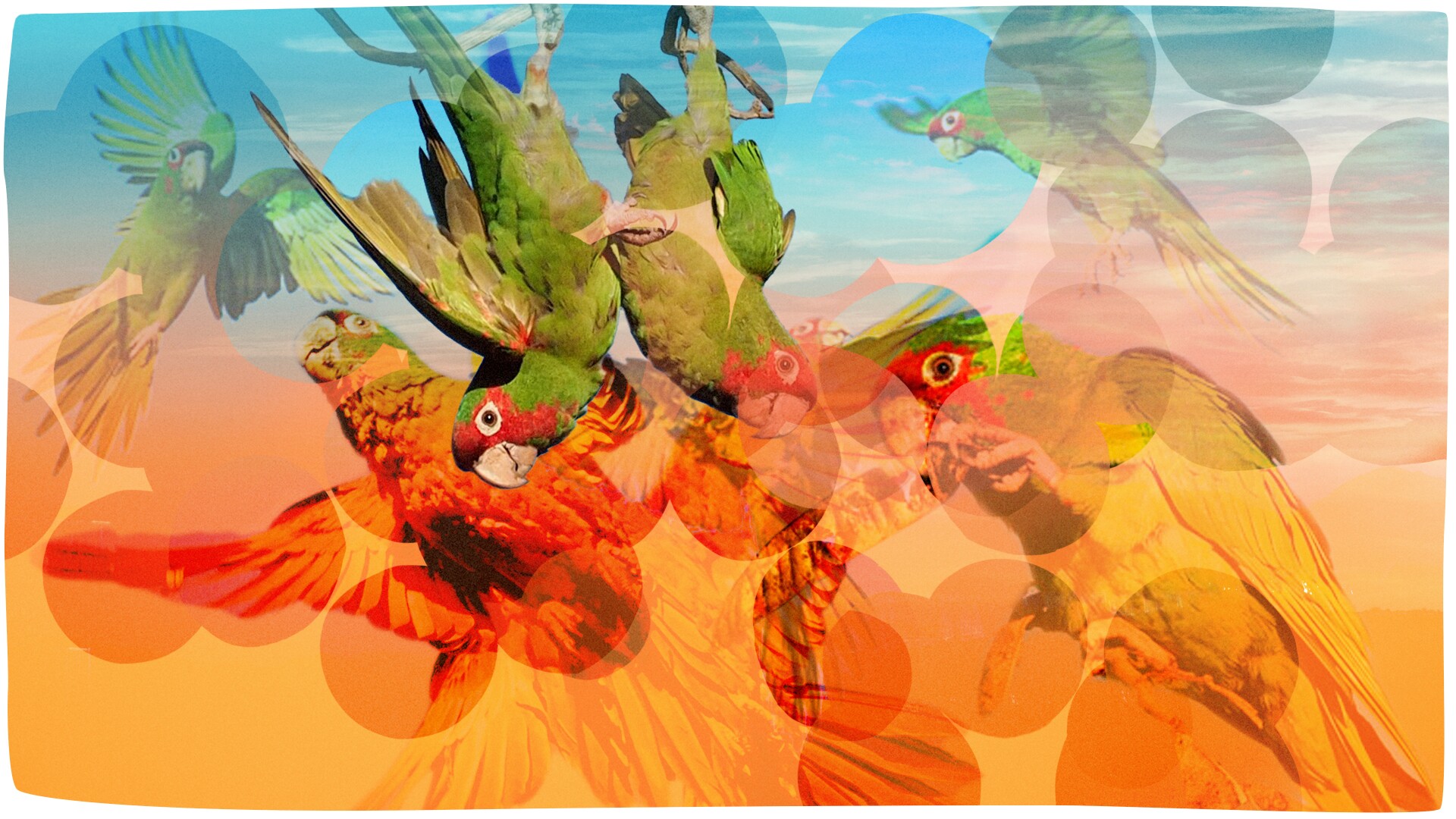 Gonzales tells her that the retail chains around the Mariachi Plaza are in a “war of volume” with the mariachis who are asking for performances with their street corner games. Hsu and Gonzales pass a hired DJ who is booming techno outside a wireless shop. It’s the sound of gentrification, says Gonzales. 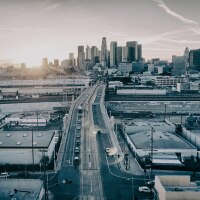 What rises in the air of Los Angeles stays there, says Richard Flagan, atmospheric researcher at Caltech. Dust, pollen, water vapor, chemical aerosols and the products of their interaction hang over the city, trapped under thermal inversion. Radiant sun, remarkably still air, and the barrier of the nearby mountains likely created the haze that Cabrillo called smoke, and Angelenos today uncomfortably breathe as smog. But it’s not the smog from seventy years ago. Then it was so opaque that it forced LAX to close, so damaging to the eyes and lungs that children sat idly at their school desks at lunchtime.

The smog has changed and Angelenos has seen the mountains more often in 2020. But ozone (an invisible, reactive gas) reached dangerous levels on 157 days with bad air. Soot particles from engine exhaust continued to settle in the lungs of children who lived downwind from motorway junctions. The inhalation of the forest fire smoke of autumn subsided even more. Indoor air isn’t much better. The concentration of particles in many Los Angeles homes can be up to 70% of the polluted outside air.

But the Los Angeles hydrocarbon sunsets – with colors ranging from urine to scarlet fever to dried blood – they blaze! 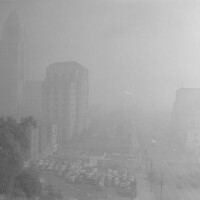 The Los Angeles air does a magic trick. The mountains surrounding the basin can sometimes disappear in a matter of minutes. The still air of the basin – the same stillness that aggravates the smog – carries particles of granite eroded by these mountains. This finely divided stuff is just the right size to interact with the wavelength of daylight. The light is reflected back to the observer like billions of tiny moons, each half a micrometer in diameter. The reflected light (which includes light scattered by clouds and the land surface) creates the illusion that something is covering the mountains. But it is not a material screen like fog or mist, but light itself. It is the Airlight of Los Angeles.

Airlight reduces the contrast. Sufficient contrast reduction and visible objects disappear in the faceless luminosity that is reflected from these billions of tiny moons. The artist Robert Irwin told the New Yorker Lawrence Weschler that Los Angeles becomes almost shadowless in the light of the air. “Bright daylight – and actually a lot, a lot of light – but no shadows. Really strange, almost dreamlike … “

Air has an answer to the seemingly insubstantial nature of Los Angeles. Or as the architect Coy Howard Weschler noted, Angelenos finds a “magical-meditative feeling of presence” in this “translucent soup”. We breathe illusions here.

The healing power of the Los Angeles air, as reported in 1874, is contained in “The History of the Medical Profession in Southern California” (Times-Mirror, 1910) by George H. Kress and Walter Lindley. Available online

Chip Jacobs, co-author of “Smogtown: The Lung-Burning History of Pollution in Los Angeles” (Abrams Press, 2008) shared the story of smog on an ALOUD podcast from the Los Angeles Public Library.

Environmental Health and Justice in Southern California, a UC Riverside student research project, combines pollution data, maps, and reminders to tell the stories of those affected by air, water, and soil pollution.

Lawrence Weschler’s essay on light in Los Angeles was published by The New Yorker in 1998. He revisited his issues in a 2016 New York video.