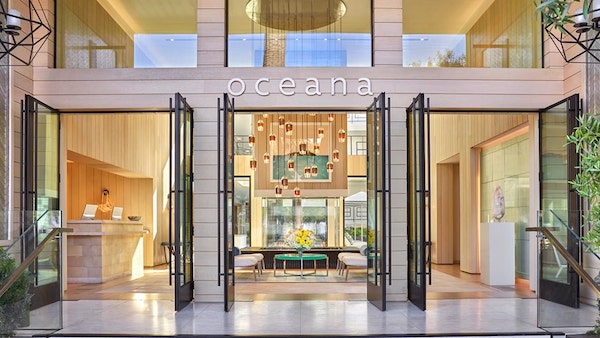 The Oceana Hotel’s second attempt to open its in-house restaurant to the public narrowly failed in a vote in the Santa Monica City Council last week. The vote of the planning committee in June had the same result as the vote in the city council, which had stalled with three votes in favor and three against.

The crux of the problem is that the Oceana Hotel is in an R2 and R3 zone district that hotels typically cannot operate in as they are designated as low and medium density residential areas. The Oceana Hotel was founded in 1958, so it is older than the current zone regulations and can therefore be operated despite the zone restrictions. The zoning rules prevent the hotel’s restaurant from serving people who are not registered guests of the hotel. This creates the problem that the hotel does not serve the neighborhood residents and can become part of the local community’s dining scene.

Opinions differ, however, that some believe that the hotel should be allowed to increase its business stake by offering the neighborhood a different selection of food that could help them become more profitable as a small business. Some feel that doing so could encourage other businesses to apply for exemptions in residential areas as well, and that opening the hotel restaurant would disrupt the tranquility of the neighborhood.

Councilor Laura Negrete, whose small business faced challenges during the pandemic, spoke out in favor of the exception, saying, “As a small business owner, we put people in a stranglehold for such things and the more we shut our community in a post-pandemic world, i think we do it ourselves [sic] Damage, ”said Negrete.

The no-votes in the city council also included Mayor Sue Himmelrich, who did not expressly oppose the exception for the hotel, but would have voted no because the exception would have required a text change, which the mayor clearly rejects. Mayor Himmelrich said: “I just want to say that I have nothing against this project and if we could have done it without changing the text, I would probably have voted for it, but I am fundamentally against text changes,” said Himmelrich.

Since the hotel is an exception to the current building regulations, a text change would be necessary. Text changes do not allow other similar exceptions, but Mayor Himmelright still believes that any text change is a “slippery slope” for businesses expanding their retail and commercial space into residential areas.

Councilor Oscar de la Torre initially appeared undecided, which resulted in his moving to postpone the vote, which was rejected. Councilor de la Torre was reprimanded by Mayor Himmelrich for having a sidebar conversation with Councilor Phil Brock during the vote that was not conducted through the council’s microphone system. De la Torre replied, “I tried to clear up the process. I was surprised to learn that it would take multiple voices, so it was a bit confusing. I needed more time to understand how the problems of local residents could be alleviated. ”Councilors De la Torre and Christina Parra, as well as Mayor Himmelrich, voted no.

Councilor Phil Brock, a resident of the hotel nearby, went from yes to no and then back to yes.

“The ability to walk to a restaurant brings the community into play and doesn’t make it exclusive, but rather inclusive,” said Brock, adding that while he is generally against densification of the neighborhood, he doesn’t believe that opening the restaurant to the public would have possible negative effects.

The stalled vote resulted in the text change being rejected as Councilor Gleam Davis was absent to break the tie. A vote in the city council requires a clear majority to pass the change.