The riot at USC over anti-Israel tweets from a student 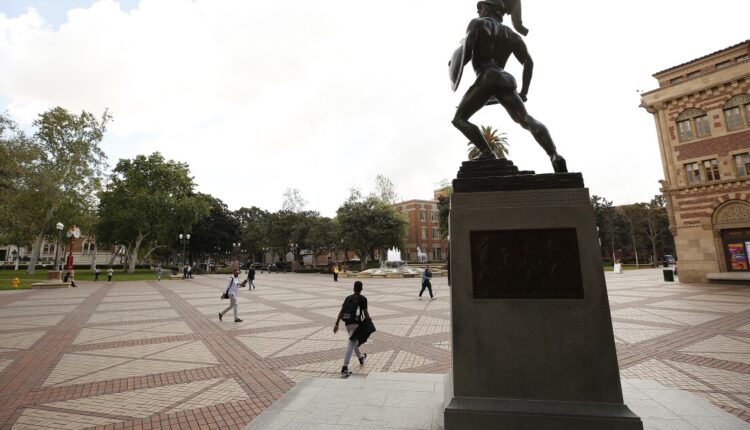 To the editor: I can only wonder why a person as bigoted as Yasmeen Mashayekh can get a paid mentoring job at the engineering school of a major university (which it has been removed from) and be appointed as a senator for by the student union Diversity, Justice and Inclusion. (“‘Toxic Atmosphere of Hate’. USC Faculty Outraged by Response to Student Tweets”, Dec. 14)

Can’t the university screen people who put them in these sensitive positions? There is enough anti-Semitism today without hating people in key positions.

To the editor: It is disappointing that your article does not draw attention to the context, power dynamics and hypocrisy of this situation.

This article hits the headlines and uncritically publishes claims by USC faculty, including one by a professor that she would be “immediately worried” if Palestinians were targeted.

An unbiased account of the subject should also have indicated that USC signatories have expressed absolutely no concern about the Palestinian student who received more than just news threatening her life in response to her political speech, that of ideology Behind the Israeli government’s policy of expansion is contrary to violence, but has also seen an increase in the personal and direct nature of threats as a result of the public attention that the USC faculty letter has brought to it.

The condemnation the signatories are asking of the USC would only compound the danger that has already led the student to move. The Times should know better than to step up the attacks on these college students.

The author is an attorney with Palestine Legal.

To the editor: Did I read that correctly? A USC student tweeted that she wanted to “kill every mothered Zionist” and then claimed that she did not feel safe on campus?

And is she a Senator for “Diversity, Justice and Inclusion”? What am I missing here?

To the editor: I’m a civil engineering graduate from USC. I was raised to honor and respect Israel.

In recent years, the Israeli government’s egregious treatment of the Palestinians has changed my mind and I have lost respect for Israel.

I can fully understand Mashayekh’s frustration and wholeheartedly support her right to express this. I hope and trust that USC will stop punishing them and will take all possible steps to protect them and keep them safe from death threats.

Nurses in Crisis Over Covid Dig In for Better Work Conditions

Winter Solstice 2021, Ursid Meteors: What to See in Santa Monica