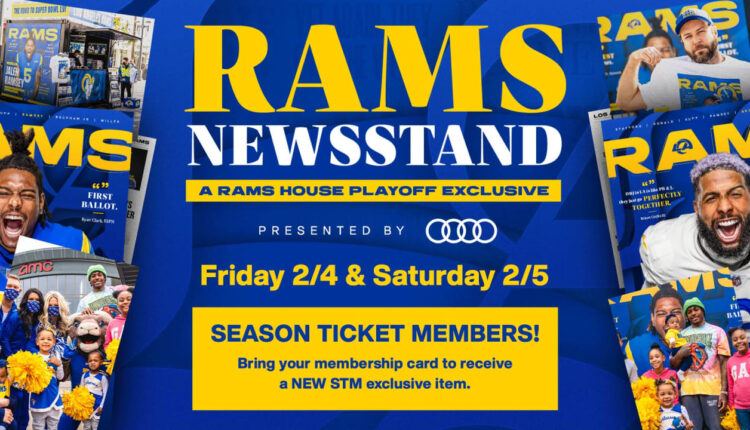 In anticipation of Super Bowl LVI on Sunday, February 13, Rams fans can visit the team’s pop-up newsstand at The Village in Woodland Hills for exclusive Rams newspapers, giveaways and prizes and to engage with Rams meet cheerleaders and rampage.

Fans stopping by the Rams Newsstand in Woodland Hills can get autographs, Super Bowl rally towels and posters and more. In addition, all Rams season ticket members who visit the kiosk and present their membership card will receive an exclusive free Rams player t-shirt. All giveaways and prizes will be given out while supplies last.

The playoff kiosks are part of an integrated campaign that began with the short film, “Our Story Isn’t Written Yet,” which tells the story of the Rams 2021 season through headlines, news clips and voiceovers. The campaign also includes first-person interviews with Rams players Aaron Donald﻿, Cooper Kupp﻿, Von Miller﻿, Jalen Ramsey and Matthew Stafford, who share their perspectives on the 2021 season. The interviews will be shared on the Rams channels.

One of the greatest sporting events in the world, Super Bowl LVI takes place on Sunday, February 13 when the Los Angeles Rams take on the Cincinnati Bengals at the Rams’ legendary home stadium, SoFi Stadium, where the game will host the first Time is held.