The long-awaited groundbreaking ceremony for the Armenian Center in the San Fernando Valley takes place – Asbarez.com 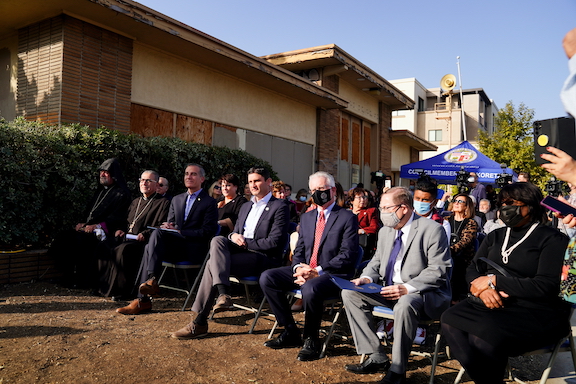 Nearly a decade-long effort by community activists, local officials and other stakeholders came to fruition on December 4th at a foundation stone laying ceremony on the grounds of the long-awaited Armenian Community Center in the West San Fernando Valley.

In 2013, Los Angeles City Councilor Paul Koretz, along with his colleagues, current LA Mayor Eric Garcetti, and City Councilor Paul Krekorian, were able to file an application for the old as a result of hard work and dedication to the Armenian community Fire station on 5001, Balboa Boulevard to the Armenian Cultural Foundation for a 30-year lease to build an Armenian community center on the 5,000 square meter property.

What was aptly referred to as the “saga” by an official on Saturday and spanned nearly a decade became a reality on December 2 when the lease was finally signed by officials from LA City and the West San Fernando Valley Chapter of the Armenian Cultural Foundation .

Many of those involved and involved attended an official groundbreaking event – a celebration – for the local Armenian Center on Saturday that will provide much-needed gathering space for the Armenian community and the neighborhood.

Mayor Garcetti, who fought for the trial during his tenure on LA City Council, was joined by Councilors Koretz and Krekorian to greet and celebrate the results of their hard work on behalf of the Armenian community. The event and speeches were also attended by Congregation member Jesse Gabriel, Jeff Prang, LA district chairman, and Tony Royster, general manager of the Los Angeles Department of General Services. California Senator Henry Stern also attended the event.

Congressman Brad Sherman was represented by his district director Scott Abrams, who presented an American flag over the US Capitol as a sign from Sherman. Accepting the gift, Garo Kamarian, the president of the ACF San Fernando Valley, promised that the flag will fly over the center once the flag poll is installed on the property.

The event began with a flag ceremony led by the Homenetmen Marching Band and Boy Scouts from the San Fernando Valley Massis Chapter. 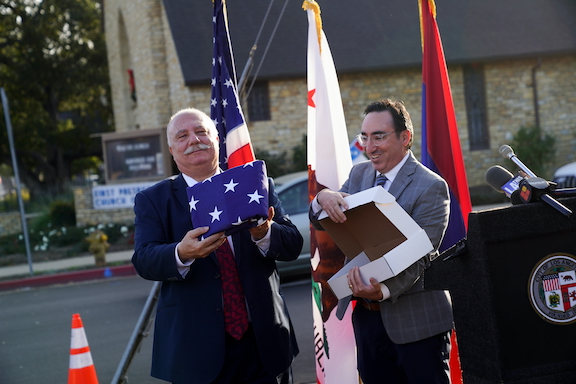 Rep. Brad Sherman’s district director Scott Abrams presents the American flag that has flown over the US Capitol

Master of Ceremonies Greg Martayan, who is Director of Public Safety and Special Duties of Councilor Koretz, invited Reverend Muron Aznikian and Pastor of Holy Martyrs Church, Archpriest Razmig Khatchadourian, to perform the blessing and blessing of the site. Very Rev. Aznikian represented the Western Prelate Bishop Torkom Donoyan, who was traveling abroad that day.

Dr. Carmen Ohanian, Chairwoman of the Central Committee of the Armenian Revolutionary Federation in the western United States, welcomed the initiative and congratulated the San Fernando Valley community, which in their remarks thanked the city officials’ vision for the realization of the center.

Speaking on behalf of the ACF, the chairman of the organization, Avedik Izmirlian, emphasized that the mission of the ACF was to support the opening and operation of Armenian centers in the community with the aim of serving future generations of Armenians.

Kamarian, chairman of the ACF West San Fernando Valley, also emphasized the important role the center will play in educating and nurturing the youth of the community. He especially thanked all employees of the various municipal offices who worked tirelessly to make the center a reality.

The event culminated with elected officials, clergy, leaders and representatives of organizations all coming together and picking up their shovels to lay the groundwork for the new center.

The event was recorded by the entire Los Angeles press corps and broadcast live on Asbarez’s Facebook page.

Following the ceremony, attendees were invited to a reception on Ferrahian school grounds, where parishioner George Kalpjian donated $ 5,000 to the renovation work.

Christmas Comet: When to Look for Leonard in Santa Monica