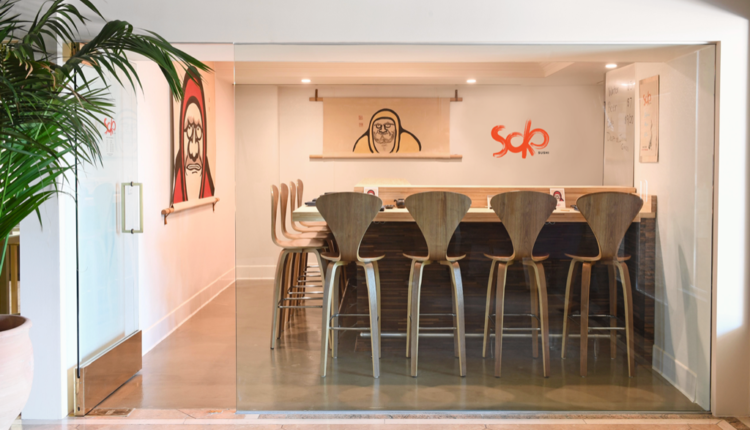 There are tons of sushi restaurants dotted across the Westside, but according to Chef Masa Shimakawa, there is only one restaurant that serves authentic Tokyo-style sushi and that is its new pop-up soko.

The Soko is arranged around an 8-seater counter and is an intimate sushi bar in the lobby on the ground floor of the Fairmont Miramar Hotel & Bungalows in Santa Monica. The restaurant embodies Japanese ideals of harmony and attention to detail, with a simple nigiri and bread roll menu that serves fish pieces of the highest quality.

“Sushi is a lifelong passion of mine, and Soko is particularly personal to me as I have the opportunity to further perfect my craft by curating deeply personal and unforgettable experiences for our guests in a personal atmosphere,” said Shimakawa.

Shimakawa comes from a simple background and has driven himself to success through pure sushi talent. Growing up in the Japanese coastal city of Hakodate, Shimakawa took his first job as a canteen cleaner with no intention of starting a culinary career.

“I started working in the sushi restaurant behind the house and had neither ideas nor detailed knowledge,” says Shimakawa. “I started learning to cook rice and cut vegetables, day after day, month after month, they (sushi cooks) taught me sushi techniques. That was my starting point. “

Shimakawa discovered that he had a natural talent and trained with top Japanese sushi chefs.

A very successful ten year stay in Canada opened doors to opportunities in the US at prestigious hotels such as the Park Hyatt in Chicago and the Four Seasons Hotel in Westlake, where he designed the modern Japanese and Asian-inspired restaurant Onyx.

Soko takes master sushi chef Shimakawa back to basics, but the food is far from easy. The menu is calculated per piece, with every single nigiri and every single roll being carefully prepared and plated.

Nigiri offerings include horse mackerel, scallop, ora king salmon, red snapper, and kanpachi, while a limited selection of rolls includes tuna, Japanese cucumber, and yellowtail with green onion and toro. There is also a small selection of starters, sake and beer.

Shimakawa carefully oversees the sourcing of every ingredient, sourcing around 70 percent of its fish from Japan and the rest from prime coastal regions such as king salmon from New Zealand and tuna from Spain.

“Soko focuses on traditional Tokyo-style Japanese sushi and completely forgets about Western American-style techniques and ingredients,” said Shimakawa. “I would like to emphasize to the customer that we want to taste and see traditional dishes, traditional products and traditional experiences. That’s what I want to deliver. “

Although the restaurant is billed as a pop-up, there is no end date in sight and some expansion plans are in the works.

While the cozy bar with eight seats remains in the center of Soko, the seating is to be expanded in the entire lobby and in the nearby sidewalk area. Shimakawa already has plans for new menu items and experiences, including a shareable nine-piece bento box.

Although the fish is first class, the dining experience should be cozy and informal, with no reservation guidelines and a pencil and paper ordering system.

The name Soko means storage room in Japanese and pays homage to the rooms where Japanese fishermen kept their catch wrapped in fermented rice and salt before the days of refrigeration. This 2,000 year old dish came to be known as narezushi and is the forerunner of the modern art of sushi.

Soko Restaurant strives to pay tribute to this long legacy and is deliberately housed in a glass-clad converted storage room at the Fairmont. Soko is open Wednesday through Sunday from 5:00 pm to 10:00 pm at 101 Wilshire Blvd on a first come, first served basis.

Lawyers: The lawsuit over the album cover of ‘Nevermind’ is ridiculous