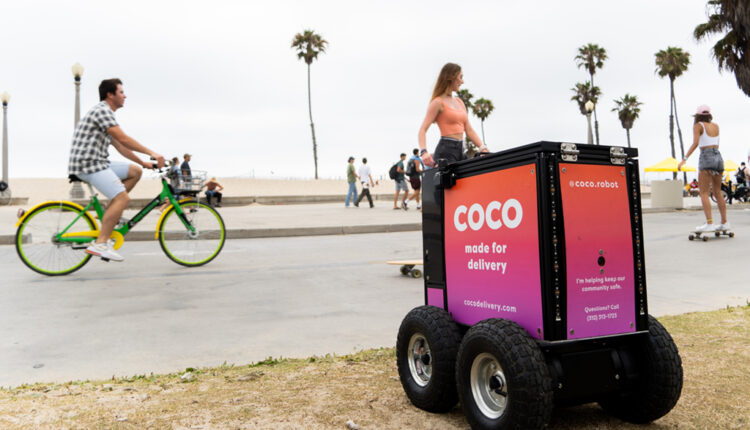 Delivery robots can be found all over the city today, and just as Santa Monica was the starting point for a micro-mobility revolution, these robot companies hope the same trend will apply to grocery delivery.

At the top is a purple robot named Coco, designed by a team of UCLA graduates that hit the streets in Fall 2020. Since then, Coco has worked with 24 local companies and completed over 3,800 deliveries.

Customers place an order through a restaurant’s preferred delivery service and if they are within a mile or two they may receive a text message that their delivery is being carried out by Coco. Restaurants then place the order into a bot and a remote pilot uses a built-in camera to take the device to its destination.

“They have a great tech scene here, there are a lot of great restaurants and perhaps most importantly, they are leaders in sustainability,” said Coco Co-Founder and CEO Zach Rash of his decision to start in Santa Monica. “It seemed like a pretty intuitive choice.”

Rash is not alone in this conclusion. Santa Monica has also been the base for a Kiwibot robotics pilot program and expects a third robotics company, Tortoise, to be launched by the end of this year. According to City Senior Transportation Planner Kyle Kozar, other companies have expressed interest and can apply to operate in Santa Monica in the future.

The advantage of these robot delivery companies is that their devices provide benefits for the customer, the dealer and the community. By removing a car and a personal delivery driver from the equation, companies claim they can charge cheaper fees, reduce delivery times, and reduce congestion and carbon emissions.

Coco calculates that its 30 local vehicles have so far reduced over 4,500 lbs of CO2 and saved 5,000 vehicle miles. Investors are buying into the company’s vision and recently contributed $ 36 million to Coco’s first major fundraising round.

Unlike the introduction of bird scooters, which were thrown en masse on the streets to the anger of city workers, robot delivery companies work closely with the city under their Zero

The ZEDZ is a partnership with the nonprofit organization LA Clean Tech Incubator and covers a square kilometer of Ocean Park and Downtown, where roadside pick-up for zero-emission vehicles and devices is a priority.

The pilot program works with a variety of eco-delivery services that use electric trucks, automobiles, bicycles, scooters, a van-share, and of course, robots. Coco, Kiwibot and Tortoise Robotics have all applied to participate and are now working with the city staff to ensure their services are aligned with community priorities.

“We try to advise the companies to a certain extent, we want the companies to be successful,” said Kozar. “What we get out of it is to explore how we as a city can regulate and ensure that these new innovative companies that are coming our way and that will be the future for better or for worse can” safely and successfully on public roads operate.”

For Kiwibot, the collaboration with the city meant a change in its business model. When they launched what Director of Strategy & Business Operations David Rodrigo calls the “cutest robot in the field” – a device with a digital grin and a wink – their main partner in Santa Monica was multinational Chick-fil-A.

Now, Kiwibot has temporarily scaled back operations in Santa Monica and is developing a partnership with a local grocery delivery platform that serves local businesses and is expected to go online before the end of the year.

“Local businesses are paramount,” said Rodrigo. “Part of our experience in Santa Monica has led us to learn the importance of prioritizing local businesses over established businesses.”

So far, the feedback from restaurants using robotic delivery has been mostly positive.

“I think the benefits for us have been the savings in delivery charges from using an innovative delivery service and the environmental benefit from using a robot over using a vehicle,” said Joseph Coccoli, Sweet Hospitality Director of Sweet Rose Creamery.

Sweet Rose Creamery has been partnering with Coco since March 2021 and an average of three to four Coco orders per day.

Both Coccoli and Arropside mentioned that Coco is a new product and this comes with a learning curve for both their staff and the robot operators. However, they said there were no major issues overall.

According to CEO Zach Rash, Coco offers a 97 percent on-time delivery rate, a 30 percent reduction in overall delivery times, and a 20 to 50 percent delivery saving for businesses.

On September 14, the city council voted to extend the ZEDZ pilot program until the end of 2022 to further promote the use of robots and other zero-emission delivery modalities while monitoring their impact on the community.

When robots were first observed and tested in Santa Monica in August 2020, the council was alarmed by the prospect of potentially unsafe autonomous vehicles and put in place a moratorium on such devices.

It was then clarified that Coco, who was then leaving Cyanbot, was being driven by a remote pilot and is in fact not autonomous. On September 14, the council also extended the moratorium on autonomous delivery vehicles until the end of 2022.

While the safety of robots is not currently an issue (no accidents caused by these devices have been reported), councilors have concerns about what robots will mean for local delivery jobs.

“I’m worried about jobs, I used to worry and I still worry,” said Mayor Sue Himmelrich.

Both Kiwibot and Coco reject the notion that their devices have negative consequences for workers.

Rash said Coco has created over 50 local jobs, including the equipment operators who control each delivery.

“We completely complement the local economy,” said Rash. “It (device operation) is a higher quality job, you don’t devalue your own vehicle and walk around in traffic all day. You’re at home and do it on the computer. “

Rodrigo believes the current status quo of grocery delivery is detrimental to both merchants and delivery drivers, who make a fraction of the profits that third-party delivery apps make from orders.

“We’re going to get to a point where we have more demand than we have people doing these jobs, so the current system is essentially broken,” said Rodrigo. “Everywhere you see the human cost is too high.”

Kiwibot operators are currently all located in Colombia, where the company is based. Rodrigo said there are plans to hire American operators in the future and also noted the benefits local businesses and their employees can get from better delivery margins.

Himmelrich is not convinced that robot deliveries only benefit workers, as the jobs created by robot companies do not necessarily match the schedule, desired flexibility and skills of typical delivery people.

“I think we always have to think about who the people are whose jobs have disappeared and whether we can create jobs for them in another industry if we cut their jobs in this industry,” said Himmelrich.

Ultimately, the council decided that the current benefits of delivery bots outweigh these potential drawbacks and unanimously voted to push the pilot expansion forward, noting that a pilot, by definition, is testing something.

The long history of the SCV in dealing with disasters