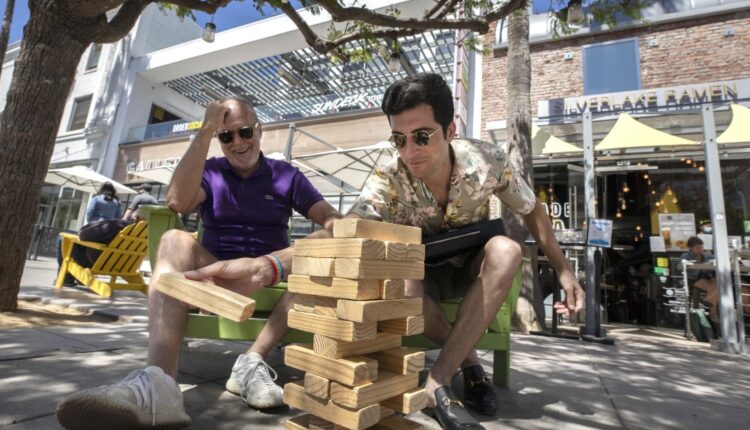 After Jim Savas received his second dose of the Pfizer vaccine in April, he returned to his Santa Monica gym.

Now that the Delta variant is on the rise, Savas still goes to the gym – the Peloton bike at home isn’t quite enough.

He is also planning to fly to Greece with his wife Amy soon.

He believes the vaccine will protect him from serious illness and death from COVID-19. He just doesn’t want to get a so-called breakthrough infection and jeopardize his vacation abroad.

So he stopped going to indoor restaurants and bars.

“Once we’ve got the virus, the point of vaccinating is so that it doesn’t kill us,” said Savas, 64, who owns a digital communications company. “But right now we’re under additional pressure that we don’t want our trip to be ruined.”

Delta arrived in Southern California just as life was returning to a semblance of normalcy.

Now some are exercising familiar caution and reverting to habits they formed earlier in the pandemic.

Jim Savas is using an outdoor elliptical machine at the TriFit Fitness Center in Santa Monica on August 3.

Others, vaccinated and exhausted from social isolation and restrictions, are reluctant to put their lives back on hold, packing airports, indoor bars and music venues.

And for some, including key frontline workers, the pandemic never felt like it was in the rearview mirror.

Amid changing guidelines from public health officials, risk assessments are extremely personal. How important is it to use the specialized equipment in an indoor gym, get on a plane to see an elderly relative, or go on a first date with someone with an unknown vaccination status? Gina Baski, owner of the TriFit fitness center in Santa Monica, said she lost over 70% of her customers during the pandemic. A recent lunch break this month revealed a lot of unused machines.

At the TriFit gym, where Savas recently spent an afternoon jogging outdoors on an elliptical machine, dozens have canceled their memberships in the past few weeks because of concerns about Delta, co-owner Gina Baski said.

About 70% had canceled earlier in the pandemic and opted to exercise at home or in gyms more loosely with respect to masking requirements.

Like many small business owners, Baski feels battered by the recent turnaround. An outdoor fitness class will be held at the TriFit Fitness Center in Santa Monica on August 3.

“It’s like post-traumatic stress disorder,” she said while standing under the white, wedding-sized canopy she paid $ 30,000 to install over an almost empty outdoor gym. “We thought we were on the other side.”

Spurred on by the highly contagious Delta variant, the number of cases and deaths is rising in Los Angeles County and across the country. Indoor masking in public spaces is back and companies are delaying the return to the office.

In LA County, unvaccinated people with COVID-19 are 19 times more likely to be hospitalized than those who are fully vaccinated, Public Health Director Barbara Ferrer said last week.

But even mild infections can lead to persistent health problems, and people who are fully vaccinated can pass the Delta variant on to others.

He has given up on indoor dining and poker nights with vaccinated friends. He will still get on a plane, protected by an N95 mask, but only for necessary travel.

If the case numbers drop, he will cut down on precautionary measures, especially if he gets a booster shot, he said.

“It’s disturbing and confusing and disappointing,” said Wachter, 63. “Two months ago, most of us thought we were in a better place now, and if it wasn’t for Delta, we would be.” Visitors to Third Street Promenade in Santa Monica on August 3 are a mix of masks and no masks.

Earlier this summer, Barrett Jeffers and his colleagues at the Providence Saint John Health Center in Santa Monica were allowed to remove their face shields while maintaining the mask and other precautions.

That month, with beds filled with COVID-19 patients, the hospital sent an email and posted signs stating that shields would be needed again.

“It’s kind of scary again,” said Jeffers, a technician who transports discharged and deceased patients, remembering the winter wave. “It’s almost like you’re going to see it all over again.”

Jeffers lives with his wife and daughter who have asthma.

“I can’t take anything home with me,” he said.

Natalie Murphy, a UCLA Psychiatric Fellow, moved her partner from Canada to LA in June, excited to live in a place where vaccines were abundant and the mood was high.

She had planned to go to a gym and go to concerts. But when the number of cases in Santa Monica rose, she held back. Many of her colleagues mask themselves indoors, even in a group where everyone is vaccinated.

“It feels like a marathon,” said Murphy, 29, who was vaccinated in February. “You just want to take a break and it’s over and you can’t see the finish line.”

Murphy’s background in psychiatry has helped her cope with the “powerlessness and helplessness” she feels as the virus spreads again.

“That changes all the time,” she says. “It could get better, but maybe not. I was mentally prepared for it and now somehow accept it. “

Some people with elderly, immunocompromised, or too young family members to be vaccinated, curb their behavior.

Travon Rasberry bought tickets to a music festival in Chicago after receiving his first dose of the vaccine in February.

It had been a year since his last vacation. But concerns about the Delta variant prompted the hotel manager to cancel his upcoming flight.

“It’s not worth risking Delta,” Rasberry, 36, wrote in an email, adding that his mother could not take the vaccine for medical reasons and that his three nieces were too young.

Many other Americans are still getting on planes. 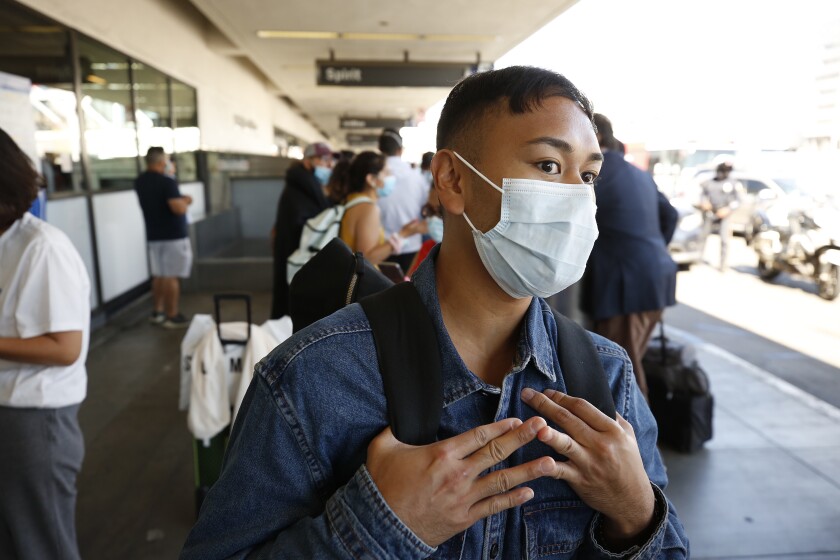 Jethro Reyes, 27, trying to return to Chicago after a friend’s wedding in Southern California, waits with other passengers outside of LAX as hundreds of flights have been canceled.

Jethro Reyes, 27, stood outside Los Angeles International Airport last week after his flight and hundreds of others were canceled.

He had flown from Chicago to LA for a friend’s wedding.

“I just came here to have fun,” he said. “We still follow social distancing guidelines and wear a mask.”

Later, back in Chicago, Reyes said he was beginning to regret the trip.

The registered nurse wears a mask at home, where he lives with his parents and brother.

“If I knew what I know now, with cases increasing, I would probably have questioned it,” he said.

They said they would continue to mask and follow public health instructions, but saw no need to take additional precautions because of Delta.

They’re not big in bars anyway and are comfortable eating inside restaurants.

The 27-year-old farmer who works at Whole Foods received his second dose of vaccine last week. His brother recently had to be intubated after contracting COVID-19. Fear of Delta and his brother’s encouragement prompted him to get vaccinated.

“We try our best to distance ourselves from people,” he said.

McCormick said he believes the media is exaggerating the dangers of COVID-19. 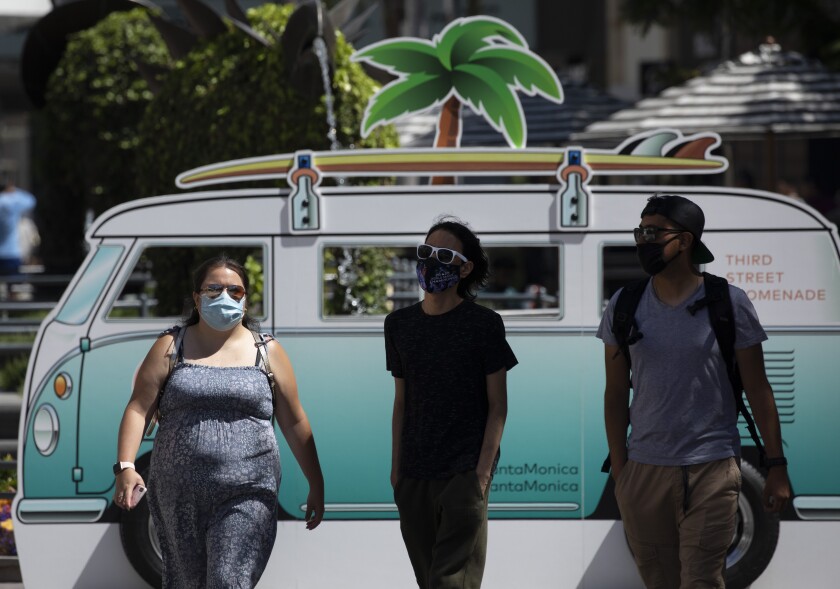 “Masking ourselves and avoiding unvaccinated people is like saying, ‘Drunk drivers can drive and we’ll stay home,'” said McCormick. “It makes no sense.”

The COVID-19 case rate in Lincoln Heights, where almost all of its residents are Latinos or Asians, is almost three times that of Santa Monica.

“How bright the world was a few months ago depended on perspective,” said Vickie M. Mays, professor of health policy and management at UCLA Fielding School of Public Health. “I don’t know that opening up necessarily had the same experience for everyone.”

Natalie Dinh, 18, works three days a week at Titop Nails in Lincoln Heights, where her mother is a nail technician. The business owned by family friends was closed during the height of the pandemic.

Now, said Dinh, customers are back, even with Delta on site. These days, Dinh is much more concerned about her family’s finances than about the coronavirus.

“Although we are not comfortable or afraid of this pandemic, we still need to get out there and make money,” she said.

As a couch potato, Dinh was careful with others from the start.

She rarely eats in restaurants and always wears a mask. She is vaccinated, just like her parents.

“That doesn’t really concern me,” Dinh said of the Delta variant. “We are currently experiencing another pandemic. I know already.”