The best (and worst) food at SoFi Stadium 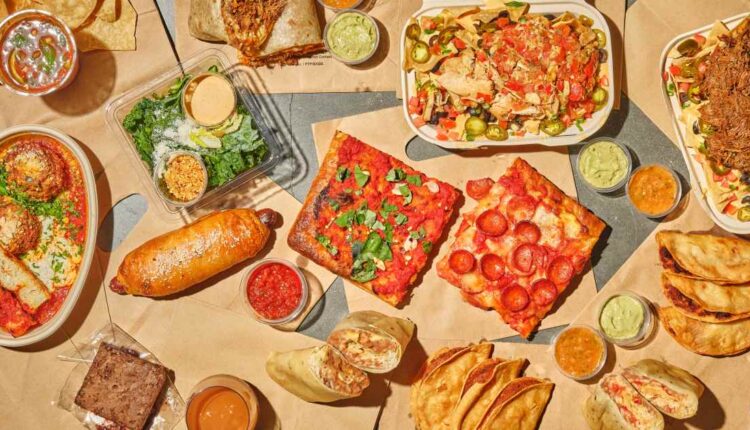 This is the first in an on-going series called Stadium Eats, which explores the best (and worst) food in sports stadiums across California.

The cheeseburger sub in the new SoFi stadium in Inglewood looks like the burger version of a beaten up Mister Fantastic. It’s a cheeseburger with a slightly overcooked patty, covered with an impressively long, single piece of American cheese, with pickles, chopped onions, and the usual condiments. The entire submarine burger hybrid is pulled and flattened to nearly a foot in length and looks and tastes like someone who has stretched a McDonald’s cheeseburger.

The judgment? It’s no better or worse than the fast food version.

The burger sub at the Fairfax Avenue concession booth in SoFi Stadium.

“The burger is an elongated burger,” says Jon Shook in a promotional video for the stadium. “We have worked very closely with Legends for the past year and a half [the company that actually produces the stadium’s food] in research and development and develop what, in our opinion, is the best food for a football stadium. “

Shook and Vinny Dotolo, the James Beard Award-winning chefs behind Animal and Jon and Vinny’s, signed up as culinary consultants for SoFi earlier this year and are working with the Legends team to develop the food.

Despite the connection with the celebrity chef, my expectations remained low. While Los Angeles is the best food city in the country (no bias here), that can’t be said for the fare at this city’s sports stadiums. Dodger dogs may be nostalgic (I’ve been eating them since I had my teeth and probably before), but not my favorite hot dog. Will I ever go through a game without one? Of course not. Those garlic fries? They’re always mushy, but I still let every game breathe with garlic.

Some of the groceries available at the SoFi stadium concession stands.

Shortly after SoFi hosted its first pre-season NFL game in August, participants used social media to declare food a disaster. “I still feel completely betrayed by how disgusting the food was at the SoFi stadium,” tweeted @syrupyswt. “I’m pretty sure the crispy hot dog is still sitting in my stomach and giving me indigestion.”

“It’s been three days and I’m still thinking about how bad the food is at the SoFi stadium,” wrote @ jackie_lie5. “Just a travesty.”

The food isn’t as bad as Twitter critics would have us believe. It’s not great, but what it lacks in taste it makes up for in variety.

At SoFi, general admission holders have access to four concession booths, each dedicated to a specific street in Los Angeles. The “Fairfax Avenue” stand is what Shook and Dotolo describe as a “sub, deli, cheeseburger concept”. The “Olvera Street” stand serves Mexican cuisine. There are Japanese-inspired articles on Sawtelle Boulevard and Italian food on San Vicente Boulevard.

Personal soccer is always an event lasting several hours, which means you need to eat something. Here’s a breakdown of what you’ll get at each booth – and what to avoid: 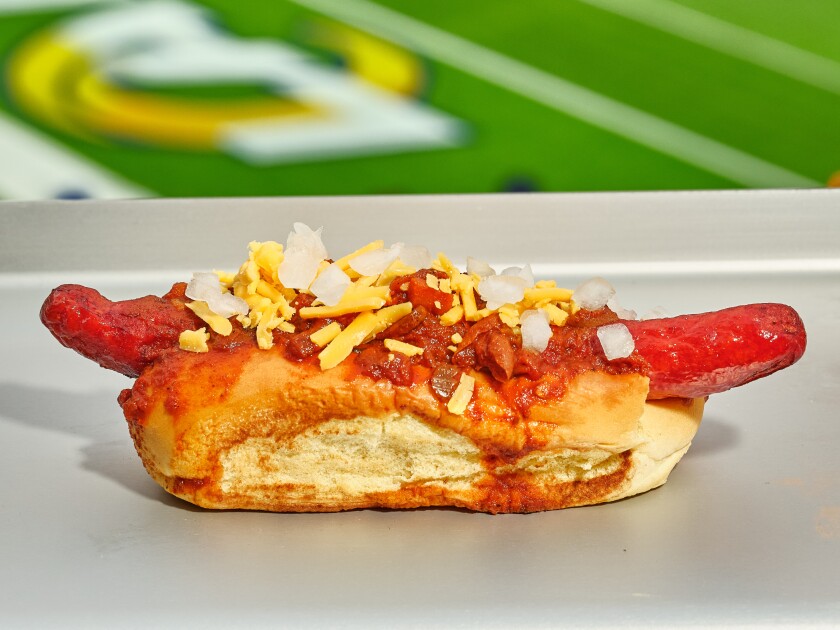 The Chili Dog at the Fairfax Avenue concession booth at SoFi Stadium.

Twitter users hated the hot dog and called it wrinkled and wrinkled. It’s deep-fried which gives it the look of an old man, but it’s not bad and it’s actually quite a blast. Drown it in spices and you are good to go. The vegetable chili has recognizable pieces of vegetables and beans. The chicken salad sandwich tastes like something you might find around the corner store. The chips and onion dip are a less exciting version of the Lipton onion soup mix and sour cream situation that makes it onto most potluck tables, but it’s still satisfying. The chocolate chip cookie is one of the best bites in the stadium. Crunchy around the edges and chewy in the middle, it’s textbook-excellent. If you go to the stadium and eat something, do it with this plastic-wrapped biscuit. The Chocolate Chip Cookie at the Fairfax Avenue Concession Booth in SoFi Stadium. The Beef Barbacoa Burrito at the Olvera St. concession stand in the SoFi stadium.

Here you will find Burritos La Palma flour tortillas – the perfectly elastic and chewy tortillas from which the famous burritos of the restaurant are made. Here they are used for beef barbacoa, chicken tinga, and bean and cheese burritos. Like Taco Bell, the burritos are filled with shredded tortilla chips that go limp before returning to your seat. So I would suggest that you avoid the disappointment of sagging chips and order your burrito without them.

Stay away from the crispy shrimp taco and crispy potato tacos. The prawn filling tastes like a creamy fish soup that is past its prime, and the potato filling is what I imagine a yoga mat to be. Ask for a side of the orange sauce – that comes with the nachos – for anything you order. Just ask for a tortilla and cup of this sauce and name it dinner. The Stromboli dog at the concession booth on San Vicente Blvd in SoFi Stadium.

I’m a fan of all types of processed meat (the salty and flabby the better), so it should come as no surprise that I enjoyed the Stromboli dog. It’s a sausage wrapped in capicola, mortadella, salami, and provolone and neatly tucked into a cocoon of pizza dough. They bite into meat, then more meat and melted cheese. But don’t order the pizza. The Detroit-style foccacia-style square is as hard as a brick in some places and squishy in others, and it’s smeared with what appears to be a straight tomato paste. If you’re expecting something similar to what you love about Jon and Vinny, you will be disappointed. The meatballs with focaccia and ricotta on the concession San Vicente Blvd are in the SoFi stadium.

Order the meatballs that are similar to but not quite the same as what you find in the chefs’ Brentwood and Fairfax restaurants. They’re also nicely presented with two softball-sized meatballs, tomato sauce, a dollop of whipped ricotta, and two plates of toasted focaccia. This stand also hosted my second favorite dessert, which I thought was a chocolate pudding / butterscotch budino hybrid, but was actually chocolate pudding covered with a layer of salted caramel. The pudding is rich and smooth, and I would lick the salted caramel from almost anything. If you’re smarter than me, save some of your chocolate chip cookie and dip it in the caramel. This was a sad but well-intentioned tribute to one of the best food streets in town. The sesame and ginger salad is better than most salads that come in a plastic bowl, with a dressing reminiscent of the chunky carrot and ginger dressings that decorate most salads in strip mall sushi restaurants. The chicken tenders are moist with a crispy crust that maintains their crispiness for the first half of the game. They are good on their own, but are soaked in a sweet, sweet teriyaki sauce on the crispy chicken sandwich. If you try anything from this stand, make it to the tsunami toddlers. There are a bunch of crispy tater tots covered in every sauce you come across at your local sushi place: eel sauce, kewpie mayonnaise and sriracha, as well as furikake and togarashi.

A lot is invested in the procurement and preparation of food for a place with 70,000 inhabitants. And they might not get it right for the first few weeks or even months. But while the food is far from great, SoFi Stadium is a remarkable place to watch a game. The 70,000 square foot LED halo video board is fascinating. It’s like watching a game in space with food that brings you back to earth.