‘The Bear’ effect: Can Italian beef thrive in Los Angeles? 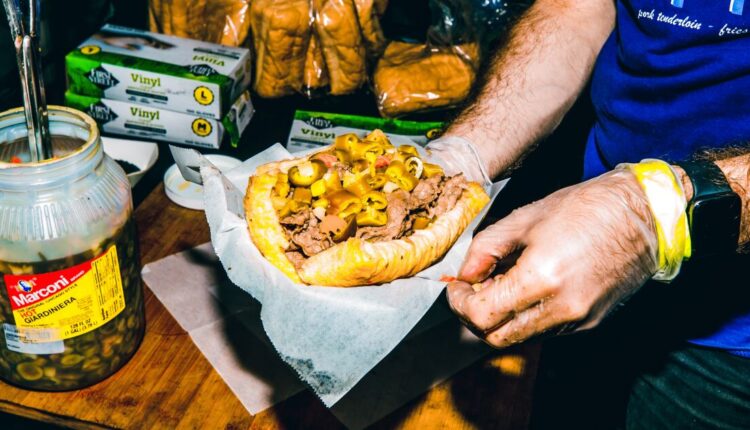 Most days, Michael Walker couldn’t move his Italian beef sandwiches with much ease — he’d sell maybe 10 all day at his Los Angeles pop-up, Comfy Pup. Then, on June 26, he sold out of the beef within two hours of setting up his food stall.

Such is the power of “The Bear,” the FX series that had premiered days earlier and quickly found itself at the heart of an ongoing discourse on chef life, grief, kitchen PTSD and, of course, Italian beef, the beloved Chicago dish that is featured prominently on the show. Southern California chefs already endedeared to the sopping wet, aromatic sandwich want to believe the real jump in popularity is simply the growing allure of one of Chicago’s most iconic foods, and they’re hoping it’s here to stay in LA

Chicagoans like Walker — whose Comfy Pup is devoted to the food of the Midwest — can rattle off the necessary components of “a beef” as easily as they can extol the virtues of a pickle-speared Chicago hot dog: The beef meat should be roasted , sliced ​​paper-thin and briefly soaked in flavorful jus, then heaped into a 6-to-8-inch bread roll of hyper-specific origin and topped with sweet (roasted) or spicy peppers, the latter a moniker of tangy giardiniera, which adds a bright, vinegar bite to an otherwise hefty, heavy meal. The sandwich can come “dry,” “wet” or “dipped,” depending on how soaked one prefers the bread, which determines how savory and messy the experience will be.

Historically, few restaurants in the LA area have offered a true beef, though that’s changing, thanks to the popularity of the show. Just ask Walker.

“The weekend that it came out, we sold like 250% more than we normally do,” he says of his stand, which this year has primarily popped up at LA’s weekly Arts District food festival, Smorgasburg. This Sunday marks its final appearance there, with new locations to be announced later on Instagram. “It was crazy. It amped up immediately. I would say that probably for the first three weeks after the show came out, we sold out right away. I can still hear people say it as they walk by: They’ll see my menu and be like, ‘Italian beef. Yes, boss!’ And I just think that’s so funny because people had no idea what Italian beef was. Now everyone’s quoting the show upon seeing the sandwich.”

The sandwich sits at the crux of the comedic drama and establishes the power struggle that unfolds throughout the first season. Fine-dining chef Carmen “Carmy” Berzatto (played by Jeremy Allen White) returns to help run his family beef shop after the death of his brother. Wanting to reimagine their more straightforward, tried-and-true recipes to incorporate a bit more of himself and his culinary prowess, Carmy alters the recipe for the restaurant’s jus, the red sauce and the cuts of beef, and introduces the French-based hierarchal brigade system of running a kitchen, including the demand that each person acknowledge every command with the affirmation “Yes, Chef!”

Michael Walker reaches for some tongs to load a bun with Italian beef at weekly food festival Smorgasburg. In October, Comfy Pup will resume popping up elsewhere in the city.

(Annie Noelker / For The Times)

He immediately throws the staff — including his fellow leader of fictional sandwich shop the Beef, Richard “Richie” Jerimovich (Ebon Moss-Bachrach) — into chaos. Real-life fans of the sandwich feel similarly; one simply doesn’t mess with a beef, and if you’re going to “improve” it, you’d better bring your A-game.

That Sunday in June, Walker couldn’t figure out where all of his new business was coming from. Later that evening, it dawned on him that the show had premiered the previous Thursday; he then binged the entire series and saw much of himself in Carmy.

Walker, who grew up in Buffalo Grove, a suburb just outside of Chicago, wanted to put his own stamp on the beloved beef he’d grown up eating all his life. At first, he slow-roasted beef bones to make the jus, spending hours to create a more unique flavor profile than the Vienna Beef stock and meat that many beef shops source from. He saw Carmy as a figurehead of the direction chefs are headed, the new guard of fine-dining technique and creativity meeting the stalwarts.

“When I saw that I was like, ‘Yes, exactly, Carmy,’ but it doesn’t go that way,” he says. “I would say 90% of the people would like my house-made Italian beef, but that 10% comes up and they’re like, ‘This doesn’t taste like Portillo’s.’ But those are the people I don’t want to upset because, you know, those are the guys coming up to me that look exactly like all my best friends’ dads.”

Even though the sandwiches were popular, that feedback crushed him, and given the time and spacial constraints it was taking to make the beef, Walker opted to swap his meat to Vienna products and streamline his operation — for now. After Sunday’s final appearance at Smorgasburg, Comfy Pup will revert to appearances at bars and events throughout the county, giving Walker a chance to catch up on some much-needed sleep. The chef dreams of reprising his more gourmet take on the sandwich, roasting beef bones and long-simmering jus, at an offshoot series called Fancy Pup.

Along another edge of downtown, a nearly century-old deli has begun offering the Italian beef for the first time.

Billy Astorga also sees himself in Carmy. In February, the Le Cordon Bleu graduate with a background in fine dining and private cheffing joined the team at Eastside Italian Deli, trading a more aesthetically driven, tweezer-oriented mindset for hoagies, salads and spreads.

“That’s been the hard part for me,” he says. “With over 10 years of being an artist and having to put that first, and now being in a place where it’s not very significant, it sometimes makes me feel like, ‘Am I dropping the ball?’ But it shows through little things that I do.”

To that end, Astorga has been revamping some of Eastside’s more classic menu items, such as the potato salad, and introducing newer, chefier options to the catering menu. It’s also why he added his take on the Italian beef to both the Chinatown and Los Feliz locations.

The chef watched “The Bear’s” pilot, which he said gave him anxiety, then came into work and told co-owner Vito Angiuli how much he enjoyed it. Astorga wrapped work at 2:30 pm, went home, binged the series until about 3 am and went to bed dreaming of beef. He woke up at 5:30 am, arrived at the deli by 6:30 am, and an hour later, the two were already planning the new sandwich.

The deli’s house roast beef — an all-day process devised by a decades-long employee — was already on hand for the cold and hot roast beef sandwiches, the latter of which includes provolone and roasted peppers. The new Italian beef, called the Bear, gets an extra slice of provolone (an ingredient not used in a classic Italian beef), giardiniera and a ladle of jus made from the roast beef pan drippings. For the bear sandwich, they add the sliced ​​beef to the jus for 15 minutes maximum (the meat is sliced ​​thicker than in a traditional Italian beef, so it can stand up to a bath in the steaming sauce for longer). It’s not served on a Turano Baking Co. roll — the gold standard for beef purists but a nearly impossible bread to source here in Los Angeles — but a pillowy Italian roll that still manages to remain firm with a ladling of jus. It’s an ode not just to his shared experience with Carmy, but also to one of the only shows he’s seen encapsulate the pitfalls, highs and anxieties of working in professional kitchens.

“For me, it was the fact that they were able to convey the frustration so well, and how intense kitchen life can be for people,” Astorga says. “A lot of people don’t realize how intense it is, and how it carries over into your personal life. A lot of hard jobs tend to do that, but this industry is really hard; a lot of bosses that I work with are divorced, they have issues with drugs or alcohol.”

In Buena Park and Moreno Valley, a little piece of Chicago draws hundreds of thousands of guests per year with the scent of long-roasted beef and some of the world’s most iconic hot dogs. Portillo’s is a famous Chicagoland chain that’s expanded to nine — soon to be 10 — states since its humble beginnings as a hot dog stood in 1963, and, like for many other vendors of the Italian beef, sales of the sandwich have boomed since the show’s premiered in late June.

Garrett Kern can’t say for certain whether “The Bear” is entirely responsible for Portillo’s sandwich’s recent rise in popularity, but the vice president of the company’s strategy and culinary arms says it’s probably the cause.

“I’ve had countless people — close friends, family, acquaintances, etc. — reach out to me,” Kern says. “People in the office talk about the show all the time. I would assume there’d be some folks [customers] about it, since if you’re asking in a place like LA, our locations are probably some of the closest places you can get legit Italian beef.”

They’re few and far between, especially from name brands. Other major Chicago beef makers have tried to relocate to Los Angeles — some more successfully than others. At Gino’s East, which opened in Sherman Oaks in late 2019, sales of the beef are up as well; beef institution Al’s Beef closed in Alhambra in 2016. 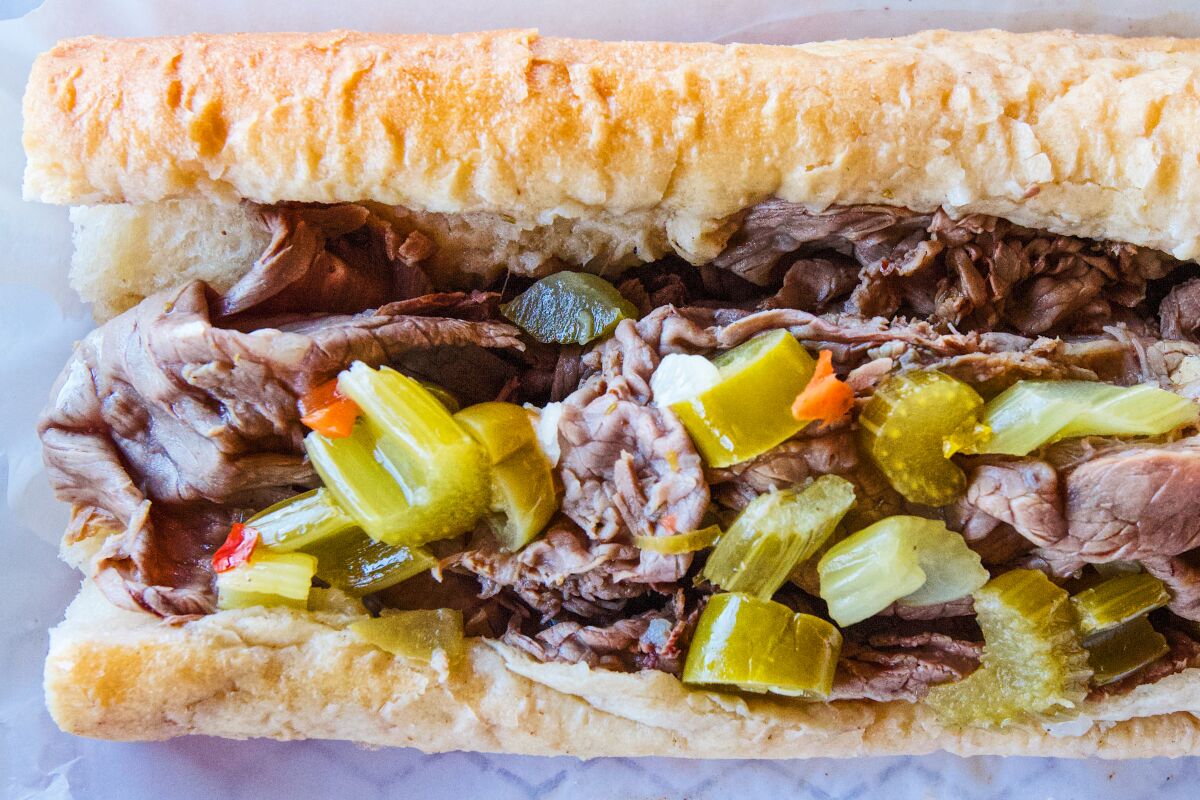 The Portillo’s Italian beef took years to gain popularity with customers beyond the Chicago region. Since “The Bear’s” premiere, the national chain says that sales of the item are up across the country.

At Portillo’s, home of one of the gold standards of an Italian beef, the meat is roasted at a commissary kitchen, with the jus made in-house too. It’s all scooped onto Turano rolls and topped with a proprietary giardiniera blend from Marconi that involves carrots, celery, peppers and cauliflower diced and portioned to Portillo’s specifications — including slightly more carrots and celery than the jarred variety on store shelves.

The post-premier jump in sales of these sandwiches hasn’t been reflected in the Chicago-area locations, but, says Kern, it has been nearly everywhere else. Kern, who grew up in Chicago eating Italian beef, is thrilled to see it take off elsewhere in the country — a far cry from the brand’s initial attempts to introduce the sandwich, which was often met with customers who would return to the counter citing soggy bread and asking the staff to remake it for them. He’s optimistic that “The Bear’s” wave of interest is just the beginning.

“I hope that someday it’s up there on the Mt. Rushmore of beef sandwiches that other people are familiar with,” Kern says, “but it’s highly regional, and I think it’s just starting to dip its toe into the water and introduce itself to the folks.”