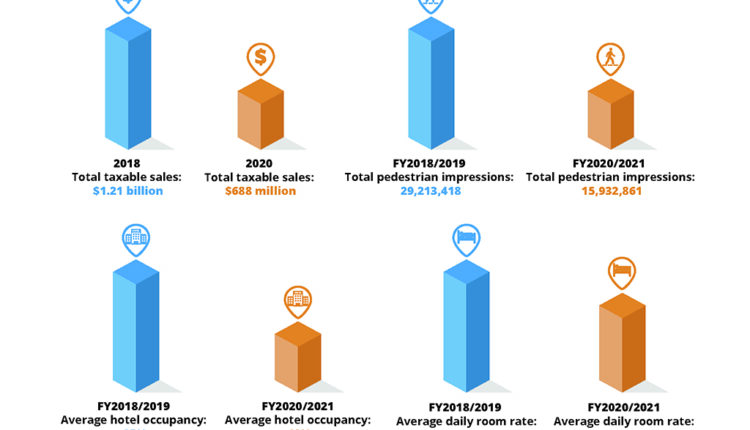 Despite promising signs of a return to normal, pedestrian numbers, spending levels and hotel occupancy in the city center were around half what they were before the pandemic last year.

These numbers are listed in Downtown Santa Monica, Inc.’s annual report, which shares a lot of optimism for the future recovery but could not avoid the last year being economically devastating for many downtown businesses and hotels.

In fiscal 2018 through 2019 before the pandemic, hotels had an average occupancy rate of 85 percent and an average room rate of $ 335 per day.

These overarching figures paint a bleak picture, but if broken down more precisely, they contain glimmers of hope.

For example, while hotel occupancy reached a low of 20 percent in January, there was a relative boom in the summer with an occupancy rate of 72 percent in June and an average daily rate of $ 301. This is not far from pre-pandemic numbers, and shows that downtown Santa Monica still has a strong draw for domestic and local visitors, even though international travelers have been largely barred from visiting.

To attract more visitors to the city center, DTSM launched a regional advertising campaign in July 2020, which could be seen on over 100 billboards, and doubled its PR and marketing campaigns with a total of 3,457 placements in newspapers, magazines, event directories, blogs and social media -Posts.

Another positive indicator in the annual report was rental prices. Despite the significant decline in visitor numbers and spending, apartment and retail rents retained most of their value in the last financial year, with annual decreases of 4 and 5 percent respectively.

“Our emotional, physical, and economic recovery from the pandemic will take time and effort,” said Kathleen Rawson, CEO of Downtown Santa Monica, Inc., in the report. “But if we all do our part and continue to work together and build on one another, I am confident that we will emerge stronger and better meet the challenges of tomorrow.”

The problem with Aliso Canyon is SoCalGas’ safety culture