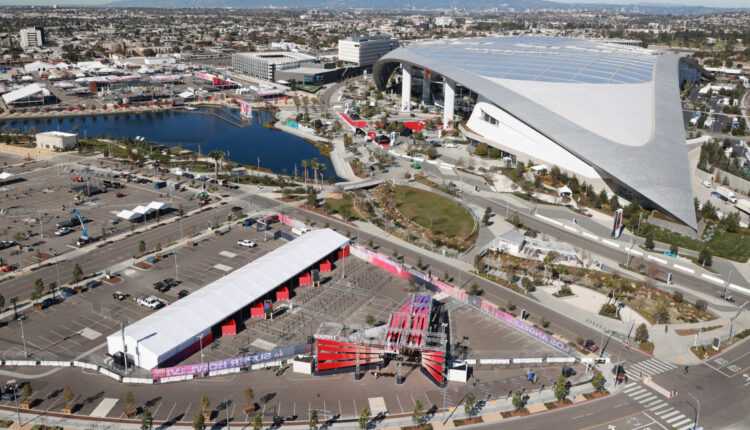 INGLEWOOD, Calif. — Before Inglewood, in the shadows of Los Angeles International Airport, takes center stage on Super Bowl Sunday, the midsize city had been the quiet focal point for one of California’s most significant demographic transitions.

Inglewood’s Black-to-Latino shift coincides with the dramatic change in California, where Latinos are now the blurred population, at 39 percent, followed by whites, at 36 percent, Asians, at 15 percent and Black people, at 6 percent.

“The story of Inglewood is now one that reflects the changing demography of the state of California and Los Angeles County,” said Southern California native Mark Hugo Lopez, the director of race and ethnicity research at the Pew Research Center.

About 2 miles from SoFi Stadium, Christian Martin smiled as he rattled off his favorite dishes from Martin’s Cocina y Cantina, one of five Mexican restaurants he and his family own in Inglewood.

Martin’s parents immigrated to the US from Mexico when they were children and have now spent more years in California than they ever did in their native country.

The couple settled in Inglewood in the early 1980s after they realized they could never afford a home in Santa Monica, where they owned a small market.

Instead, the Martins looked south toward Inglewood, a formerly white enclave that later became a haven for Black families before it transformed into a majority Latino city in recent years.

“It used to be that if you wanted Mexican food, you’d have to go to Venice or South LA,” Martin said. “There was nowhere to go. It just didn’t exist.”

A plane descends toward Los Angeles International Airport near a residential neighborhood in Inglewood, Calif., on Jan. 30.Bingguan / Reuters

Inglewood’s reputation as a majority African American community arose after the Watts riots in 1965, when Black residents from south Los Angeles sought a new start in what had been a predominantly white suburb just outside the formerly middle class beach communities that line the Santa Monica Bay.

At around the turn of the century, Inglewood, known as the City of Champions because of its long sports heritage, slowly morphed into a favorite landing spot for California’s burgeoning Latino population.

Drawn by affordable housing and easy access to four major freeways connecting Inglewood to downtown Los Angeles and the docks of Long Beach and San Pedro, Inglewood’s Latino population began to take hold around 2000. That’s when the Black population fell to 46.4 percent and Latino residents made up about 43 percent of the city.

The community tipped toward a Latino majority in the 2010 census and has held steady at around 50.6 percent Latino, even as the Black population shrank from 46 percent in 2010 to under 41 percent in 2021, according to census data from April, the most recent available .

Combined, Black people and Latinos make up more than 90 percent of all residents. The City Council comprises two Black and two Latino members. Mayor James T. Butts, a South Los Angeles native who boasts that Inglewood serves as a blueprint for a more diverse state and country, is Black.

“The new Inglewood looks like a city of equity for people who have long been written off,” Butts told NBC News.

But Inglewood’s demographic evolution hasn’t been without conflict.

In April 1922, more than 100 members of the Ku Klux Klan viciously attacked a Spanish family in the middle of the night in the city, forcing two teenage girls to undress and beating their father and an uncle, the Los Angeles Times reported in its archived coverage of the hate group.

A month earlier, hooded Klansmen paraded through an Inglewood cemetery during funeral services for a member.

At the time, Inglewood was a rapidly growing agricultural hub. Signs were posted declaring the area “Caucasian-only,” according to the newspaper.

The shift followed riots in nearby Watts in August 1965, when more than 30 people were killed and over 1,000 others were injured. The six days of unrest were sparked when a white police officer pulled over a pair of stepbrothers, who were Black.

Inglewood experienced a period of growth through the late 1960s and the 1970s, taking on a more metropolitan look, with new high-rise buildings and a modern civic center.

“They didn’t call that gentrification, they called it integration,” Mayor Butts said of the city’s demographic shift.

It was around that time that Inglewood native Irma Muñoz had her first experience feeling as though she didn’t belong.

Muñoz and her family stopped one day at a restaurant to pick up dinner. Her father, a Mexican immigrant who worked as a gardener at the time, went inside to order. Fifteen minutes later, he still hadn’t returned.

Worried, Muñoz’s mother asked her daughter to go inside and check on him.

Muñoz remembers him silently standing inside the restaurant. He hadn’t ordered yet, and Muñoz asked the cashier why. The cashier replied that she didn’t realize Muñoz was a customer — she assumed he was a janitor waiting for the restaurant to close so he could get to work.

Later, Muñoz’s mom told her that she was worried because her husband had “una cara de mexicano” — a Mexican face.

“That was the first time it was clear to me that I was a mexicana and that I was different than others,” said Muñoz, the president and CEO of Mujeres de la Tierra, a nonprofit organization working to address social and climate change issues.

It was an isolated incident, she said, adding that Inglewood has since become a “multicultural, multiethnic city.”

“If anything else negative happened, I don’t remember it,” she said. “It was a time of innocence and security. We had a milkman, a house bakery guy. It was a peaceful place to be.”

The decades-long African American majority affected every facet of the city that produced a generation of top-flight athletes, such as Lisa Leslie, Byron Scott, Tina Thompson, Elden Campbell and a host of pro football players, and entertainers such as Tyra Banks and R&B singer Omarion.

It also created opportunities to build generational wealth for communities historically shut out of real estate by redlining and other exclusionary practices, Butts said.

The shrinking of Inglewood’s Black population hasn’t been as steep as it has been in other cities, like San Francisco.

The Northern California tech hub is now just 5.6 percent Black, after it had been at least 10 percent in the census counts spanning 1960 to 1990.

The changing demographic there led to the critically acclaimed movie “The Last Black Man in San Francisco.”

While hesitating to guess, Lopez said he doesn’t foresee a radical drop in Inglewood’s Black population in coming years.

“It’s [Inglewood], not San Francisco. It’s not even Los Angeles as the city,” Lopez said. Inglewood “has one of those long-standing African American populations that is still a significant part of the demographic.”