Super Bowl fans, merchants get fired up outside SoFi Stadium 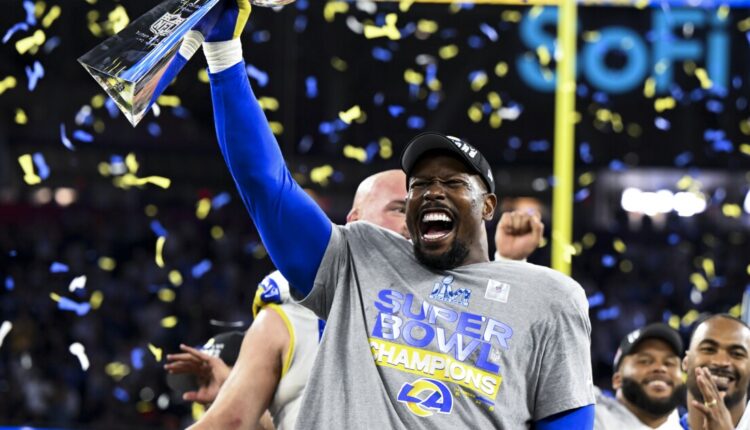 Julian Ochoa had a lot of pent-up anxiety by the fourth quarter of the Super Bowl, and it shot through the roof when Joe Burrow and the Bengals got the ball back with a little over a minute to play. But when the Rams’ defense held firm on fourth down, the stress gave way to pure joy.

“That was it,” said Ochoa, a Lynwood native who now lives in Arizona, as blue and gold confetti fell from the rafters. “Game over.”

Ochoa traveled to Atlanta to watch his team the last time they played for a title, a disappointing game that ended in defeat to the Patriots. Asked how important it was to be at SoFi on Sunday, with the Rams competing in the city’s first Super Bowl in nearly three decades, Ochoa said, “Let me put it this way: I spent $24,000 to be here. And I would do it all over again.”

Inside and outside SoFi Stadium, thousands of Rams and Cincinnati Bengals fans from near and far converged in Inglewood to party and cheer on their favorite team. The Rams’ 23-20 win was a euphoric moment for a city that, until Sunday, had won many sports championships but never a Super Bowl victory with the team in Los Angeles (In 2000, the Rams took the championship in St. Louis. )

Basking in those first golden moments, Ran fans whooped, hollered, and threw their arms into the air. “Whose house?” they chanted. “Rams’ house!” Confetti rained onto the field like snow. Across the city, fireworks crackled and popped above the palm trees.

“Congratulations to the Super Bowl champions, Los Angeles Rams,” the announcer called out to applause from the remaining crowd. Bengal’s fans still had their heads in their hands.

Sam Lee, a teacher who grew up in Inglewood but now lives in Pacoima, was ecstatic. He’s been a season ticket holder for four years.

“We finally brought it home,” he said from his seat in the stadium. “Oh my God, this is a lifetime event. It’s right up there with my marriage. Don’t tell my wife.”

When the last pass from Bengals quarterback Joe Burrow fell to the ground, the crowd at 5 Line Tavern, a Bengals hangout, fell silent.

As the loss sank in, fans gave each other pep talks. “That’s a young team. They will be back,” one Cincinnati native told another. “We are proud,” said Maxine Hosley, 77, who was at the tavern with her family. “They had a winning spirit. They got a great future ahead of them.”

At least two hundred 200 fans had gathered outside the LA Live by 8 pm as several helicopters circled overhead.

Michael Gillette, 31, from Downtown LA, came down to the entertainment complex with his partner to see the crowd. “It’s a wild night. We are glad we are here,” he said. “In LA, we aren’t tearing things down, we are building things back.”

Thomas Parral of Whittier, waved a giant Rams flag as he bellowed, “Whose house?” It felt amazing, he said, to be out celebrating a Super Bowl championship after pandemic killed parades for other local championships. .”We wish we could have done this with a Dodgers parade — and one for the Lakers — but we’re out here now and that’s all that matters,” he said.

A large crowd had gathered at 11th and Hope streets just before 9 pm The police cordoned off the area as fans inside shot off fireworks in the middle of the intersection. Multiple people climbed nearby street lights. Police on bullhorns were telling people in the area that they were “risking serious injury” if they stayed, and declared an unlawful assembly on a loudspeaker from a truck. Some revelers left immediately, while others taunted officers, throwing glass bottles in their direction. Police fired projectiles at people as the crowd fled.

“We’re just going to walk this way like we’re normal citizens,” one woman said to her scared friend as they came out of a bar and walked hurriedly away from the police skirmish line.

The game’s outcome was up in the air until the end. When wide receiver Odell Beckham Jr. hauled in the game’s first touchdown, Joey Keenan and Maguire Kelly exploded in joy — even surpassing the exuberance of the other diehard Rams fans surrounding them.

“That was a euphoric experience, an out-of-body experience,” Kelly said.

Keenan, who grew up in West Hills and traveled from Tallahassee, Fla., to Los Angeles to attend the big game with 20 other sports management students, said he never would have believed that an LA team would be playing in the first Super Bowl hosted by the city in nearly 30 years.

“We just got the team five, six years ago,” he said. “But you know what, some dreams do come true.”

Before players took to the field at 3:30 pm, fans gathered outside the stadium’s west entrance in hopes of scoring a ticket.

Wearing a black-and-orange Bengals jersey, Lisa Houck, 52, sat on the sidewalk curb and streamed the game on her phone, her husband sipping a beer beside her.

Houck said she tried buying tickets to the game but ultimately decided to save her money to pay for her 20-year-old son’s college semester.

“Maybe [prices] will go down in the next half hour,” she said.

Inglewood resident and Rams fan Miles Kula, 30, approached Bengals fan Mohammad Sharta, 21, as he streamed the game on his phone. They didn’t know each other, but Kula suggested temporarily pushing their teams’ rivalry aside to purchase a pair of tickets and split the cost.

So far, Kula found only one ticket for $5,000. He kept refreshing the app on his phone. “It’s us versus the billionaire owners!” he said.

At Tom Bergin’s, one of the oldest Irish bars in Los Angeles and a longtime Rams’ fan haunt , Alvaro Nunez raised Vicente Munguia’s hand to force a high-five when LA team its second touchdown in the second quarter.

Munguia, a longtime 49ers fan, gazed stoically at Nunez in his Rams jersey. The longtime friends met each other when they studied at Cal Poly.

“I am torn,” Munguia said. “You always want to root for California’s team, but I am a 49ers fan.”

But in the middle of the second quarter, Munguia began talking smack about Rams quarterback, Matthew Stafford, leaving passes hanging long enough for the defense to pick him off. “If Aaron Donald doesn’t get at least two sacks, I think he’s underperforming ,” he told his friends.

And when the Bengals scored their first touchdown of the game in the second quarter, Munguia, grinning widely, held up his hands to signal a touchdown.

For the halftime show, West Coast hip hop pioneers Dr. Dre, Snoop Dogg and Kendrick Lamar took the field in a strong showing of California pride, along with Mary J. Blige, 50 Cent and Eminem — who in a nod to Colin Kaepernick’s long-running NFL protest, took a knee.

On the streets leading up to the stadium, intrepid entrepreneurs held up cardboard signs hawking parking spots for $200. and $250. and $400. And, for the truly desperate, $450.

A Pomona resident drove more than 80 miles round trip to sell N95 masks for $3 each beneath a blue EZ Up shelter. He wanted, he said, to keep people safe as the global pandemic heads into year three.

A Rams fan and a Bengals fan pose for a photo outside SoFi Stadium before the start of Super Bowl LVI.

Stacie McGinty, a wise student of the human condition, opened up her apartment bathroom, allowing football fans to relieve themselves for $10 a pop. Thirty minutes before kickoff, at least 60 people had taken her up on the offer.

Sitting on her front stoop, McGuinty laughed and gestured toward the well-lubricated Bengals fans who’d joined her on this unseasonably hot afternoon.

“I’m from LA, nowhere near Ohio,” McGuinty said with a laugh. “These are my new friends. They used the bathroom and they’re chilling.”

Those who could shelled out big bucks for the privilege of watching Super Bowl LVI in the comfort of the $5-billion arena—many of them Bengals fans who’d made the pilgrimage to Los Angeles for what they hoped would be the first Super Bowl win in franchise history.

The Los Angeles Rams had never won a Super Bowl and had made only two previous appearances, most recently a 13-3 loss to the New England Patriots in 2019 in what has been described as one of the most boring bowl games ever. 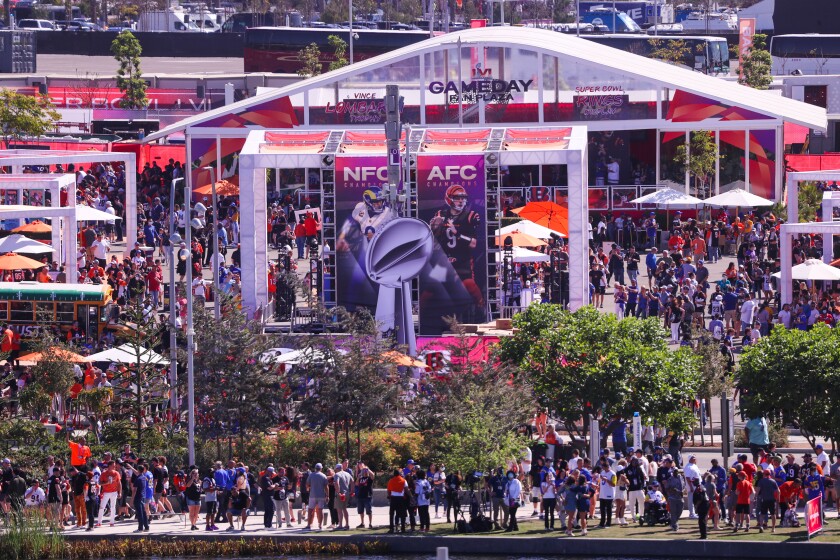 Fans gather outside SoFi Stadium before the start of the Super Bowl.

Nelson Quintanilla bought his Super Bowl ticket back in August. The 52-year-old Rams fan had no idea if his beloved team would be vying for the championship, but he would be there, whether they made it or not.

That they won a title Sunday made it all the sweeter, he said. And he needed a little sweetness Sunday morning.

The ticket he bought six months ago put him out $8,500 — a few months’ rent on an LA apartment. Compare that to the ticket his cousin bought this weekend — a just-in-time purchase of $3,500.

The drop in price, Quintanilla said, underscored the apparent indifference of many Angelenos when it came to supporting the hometown team. But with the Rams’ win on Sunday, the fan base will grow and win the allegiance of a city that values ​​results over anything else.

“LA is about winning. The Kings, the Lakers, the Clippers — they have to be on top,” he said. Quintanilla was standing in front of the SoFi Stadium lake Sunday afternoon, surrounded by crowds of people sporting Rams blue and gold, just like him. 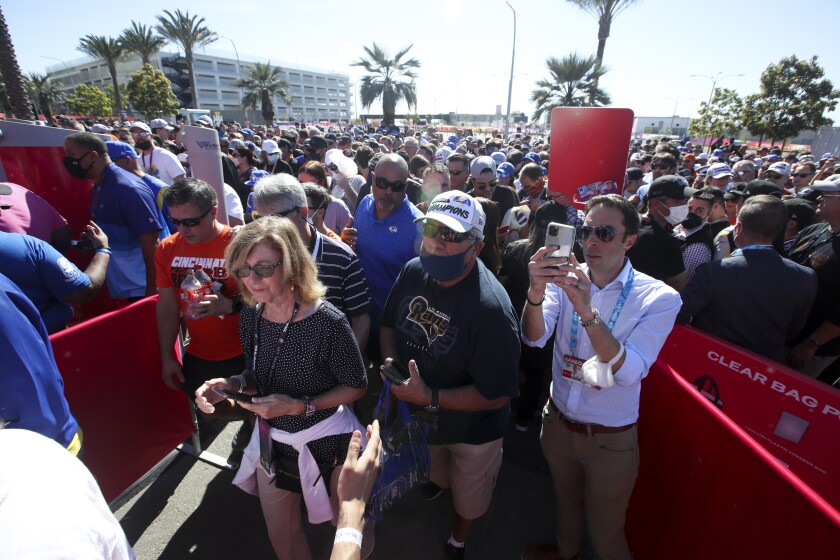 Fans line up to enter the grounds before the Super Bowl LVI at SoFi Stadium.

Mary Becerra is 56, the same age as the Super Bowl, she noted Sunday as she waited for the game to begin. It’s a “lucky number,” she joked.

Resplendent in a blue wig and a Rams jersey, Becerra came to the game with her good friend Stuart Guidry, 57. They posed for selfies, making sure to capture the stadium with its soaring silver canopy in the background.

“We’re going to kick the Bengals in their ass,” Guidry said.

Becerra is a season ticket holder and has been a Rams fan since she was little.

“I traveled everywhere to watch the Rams play so as soon as they moved to LA, I got season tickets,” she said. She won the sweepstakes for ticket holders to come to the game and got two tickets.

The two Rams fans were wearing masks to protect them from the coronavirus. Becerra said she feels safer doing it, even though she saw a lot of other fans who didn’t.

“This is huge,” she said about the Super Bowl here. “Bringing people together, uniting people, especially through all we’ve been through the past couple of years? It’s huge.”

What I Buy and Why: Pulse Music Group Founder Josh Abraham Has an On Kawara of His Birthday Date