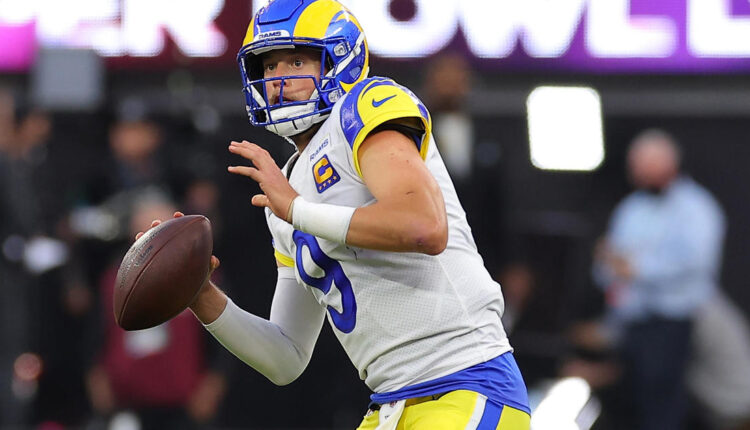 Rams quarterback Matthew Stafford has become the sixth player to throw for 6,000 yards in a single season.

Three plays later, the Rams tried their version of the Philly Special with Cooper Kupp throwing to Stafford. But they didn’t connect, and Matt Gay kicked a 41-yard field goal with 6:02 left in the third. That pulled the Rams within 20-16 of the Cincinnati Bengals.

Super Bowl 56 turned into favor of the Cincinnati Bengals with two big plays all in the span of the first 22 seconds of the third quarter.

Matthew Stafford #9 of the Los Angeles Rams attempts a pass during the second quarter of Super Bowl LVI against the Cincinnati Bengals at SoFi Stadium on February 13, 2022 in Inglewood, California.

The Bengals scored a touchdown on their first offensive play of the quarter. Joe Burrow moved to his right and then up before throwing deep to Tee Higgins, who caught the ball as Rams cornerback Jalen Ramsey fell. Higgins ran to the end zone to finish off the 75-yard TD for a 17-13 lead.

On the Rams’ first play to start the next drive, a pass from Matthew Stafford intended for Ben Skowronek bounced to Bengals cornerback Chidobe Awuzie at the Los Angeles 32.

Evan McPherson hit a field goal to put the Bengals up 20-13.

That interception gives the Bengals eight this postseason, most since the Green Bay Packers had eight in 2010.

The Rams led 13-10 going into the half. Running back Joe Mixon got the ball and ran to his right before throwing to a wide-open tee Higgins in the end zone for a 6-yard TD with 5:47 left.

Mixon joined some exclusive company as only the fifth non-quarterback to throw a TD pass in the Super Bowl. He joins Trey Burton for Philadelphia against the Patriots in 2018, Antwaan Randle El in 2006 for Pittsburgh against Seattle, Lawrence McCutcheon in 1980 for the then-St. Louis Rams against the Steelers and Dallas’ Robert Newhouse in 1978 versus Denver.

The Rams scored first, as Matthew Stafford found Odell Beckham Jr. in one-on-one coverage against Mike Hilton for the first score of the game: a 17-yard touchdown that occurred just over halfway through the first stanza, CBS Sports reports. The Bengals answered later in the quarter with a 29-yard field goal from Evan McPherson.

Stafford then capped a 75-yard drive with an 11-yard TD pass to Offensive Player of the Year Cooper Kupp with 12:51 left in the second quarter. None of the Bengals even touched Kupp coming off the line as he was wide open for his 21st TD catch this season, including the playoffs.

Stafford is just the second quarterback with a perfect passer rating through four drives of the Super Bowl since 2000. Matt Ryan also was perfect for the Falcons against the Patriots in 2017.

A botched snap by the Rams on the extra point led to a flurry with the Bengals recovering the ball.

Beckham Jr. suffered an injury to his left leg on a noncontact play with 3:50 remaining in the second quarter.

Beckham was running toward the right side of the field on a crossing route, but it appeared as though his foot got caught in the turf. He dropped a pass thrown by Matthew Stafford and clutched his leg as he fell to the turf.

Beckham was looked at by trainers on the field before being helped off. He was looked at briefly in the medical tent on the Rams’ sideline before heading to the locker room.

Beckham, who was signed by the Rams after being released by Cleveland at midseason, had two receptions for 52 yards. He scored Los Angeles’ first touchdown when he beat Mike Hilton in the right corner of the end zone for a 17-yard score.