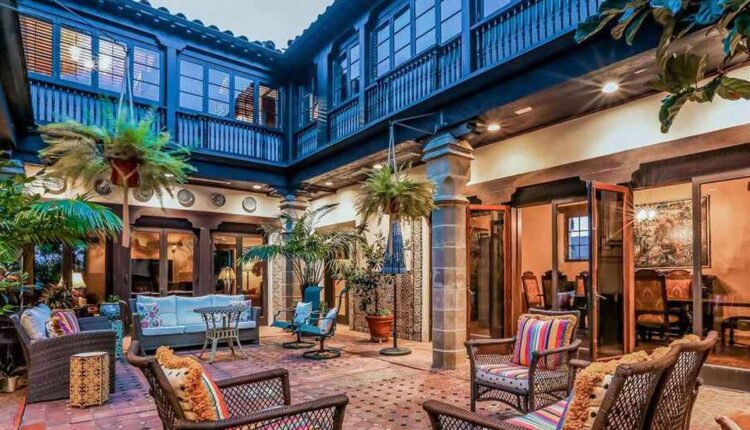 A deep-rooted fascination with native California architecture and its Mexican-Spanish roots prompted acclaimed architect John Byers to build this unique beach house on the northern edge of Santa Monica. The property, built almost a century ago, is built around a charming Moorish-inspired courtyard modeled on that of the Spanish El Greco Museum from the 16th century. It’s on the market now, asking for $ 10 million.

Commissioned by Lewis Bradbury Jr. – the wealthy youngest son of mining mogul Lewis Bradbury who also commissioned the Bradbury Building in Downtown LA – the Spanish colonial building is aptly known as Bradbury House. Badly damaged by the Northridge earthquake in 1994, the residence has since been extensively restored to its original splendor by the former owners and is listed on the National Register of Historic Places. It has also been designated a cultural and historical monument by the city of LA.

Located on a cliff on a double lot with views of the Pacific Ocean, the walled and fenced property has six bedrooms and seven bathrooms, which are spread over a little more than 5,000 square meters of living space on two levels. A spacious truck stop paved with bricks in a herringbone pattern forms the front of the mud brick facade of the house, which is supported by a thick layer of stucco and crowned by a terracotta tile roof. A distinctive entrance, adorned with blue glazed tiles, leads into the U-shaped apartment, which is interrupted throughout by stenciled beam ceilings and at least 20 different types of tile and carved wood accents. Each room also leads to the open courtyard.

Particularly noteworthy is a double-height foyer with a high ceiling, which is equipped with hand-stenciled wooden beams and an ornate oak staircase. Other highlights include a formal living room with high beamed ceilings and a fireplace adorned with a fanciful oak cornice, a formal dining room, and a large kitchen with quarter-sawn oak countertops and cabinets. Upstairs is a fireplace master hideaway, and there is also an attached two-story garage / guest house addition created by noted architect Wallace Neff in the early 1970s.

Probably the most impressive feature of the property is the private, resort-like grounds, which include a large pool and garden set amid a spacious lawn with mature trees, along with the aforementioned Moorish-style courtyard and two adjacent parcels that offer white water views protection. The property, last sold for $ 12 million in 2017, is transferred under a Mills Act contract, which means homeowners are entitled to reduced property taxes in return for preserving the historic home.