Storms and tides can hinder the California oil spill cleanup 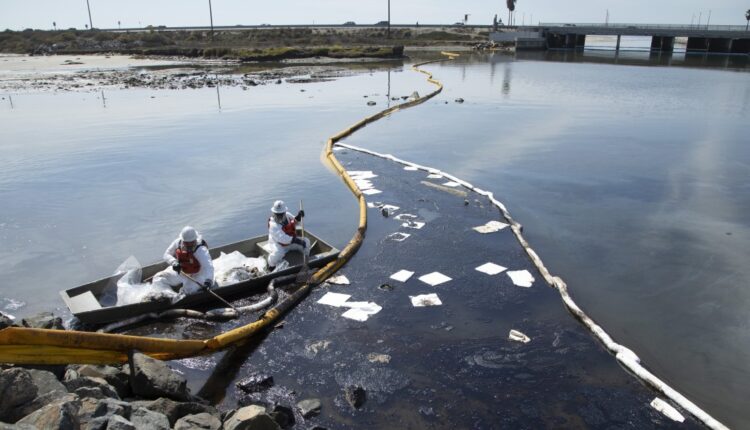 Bad weather on Monday could pose a challenge to crews as they strive to clean up the massive oil spill off the Huntington Beach coast, several weather authorities warned.

The spill, first reported Saturday morning, came from a pipeline off the coast of Huntington Beach that was connected to an offshore oil rig called Elly. By Sunday afternoon, about 126,000 gallons of crude oil had spilled into the water blackening nearby beaches and polluting a 25-acre wetland called Talbert Marsh.

“When thunderstorms develop over the coastal waters or wherever they are [oil spill] Plant cleanup, if it’s outside they have to shut down for safety reasons, ”she said.

The best chance for measurable rain in the region is Monday afternoon through Tuesday morning, Oswant said, as a low pressure system is moving northeast from the Baja coast, bringing with it isolated showers, isolated thunderstorms and the potential for lightning strikes.

Alan Reppert, a senior meteorologist at AccuWeather, said in a post that the storm could also bring higher swells to the area by Tuesday.

“It is possible that the raised waves will move and enlarge the oil spill more and interfere with any cleaning,” said Reppert.

Orange County officials have requested a major disaster statement from President Biden that would provide additional federal aid to state and local authorities and individuals affected by the leak.

There is a possibility of showers / storms for LA and Ventura Co. Monday afternoon-night. As is typical with these types of showers / storms, some places will rain and other places will stay dry. Keep an eye on the radar to see if you are in the way and plan your outdoor work accordingly. #social pic.twitter.com/2F0YjYVBMQ

The low pressure system will also be relocated to the Los Angeles area on Monday, where isolated thunderstorms, lightning and gusty winds are possible, according to the National Weather Service.

A head-on system could bring more rain to Southern California by Thursday night, while a cooling trend as the week progresses expect temperatures in the high 60s and low 70s in Orange and Los Angeles counties.

But the biggest threat remains to the crews working to protect wildlife and coastal habitats from the oil, said David Sweet, a meteorologist with the National Weather Service in Oxnard. Storms could be dangerous for workers on boats and on the beaches, he warned.

“Rising winds can create higher seas locally due to the winds associated with the storm,” said Sweet. “At the local level, it could affect the seas, but the main impact would be lightning.”

Orange County’s regulatory agency Katrina Foley called the oil spill a “tragedy on all fronts” and urged residents to stay away from the beaches and water while the crews assess the damage.

Fisheries in the area have been closed as investigators investigated possible effects on fish, the California Department of Fish and Wildlife said.

The oil is expected to wash ashore for several days.