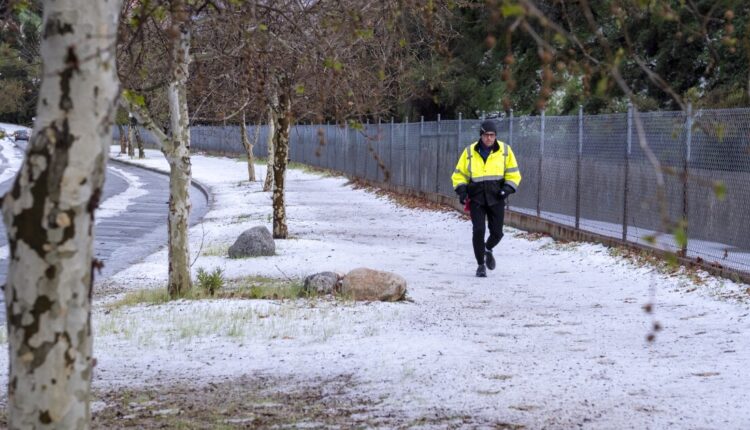 Mother Nature reminded Southern Californians that winter was still around, bringing a dramatic array of thunderstorms, lightning, hail and chilly temperatures after weeks of bone-dry conditions.

After a week of sunny skies and record-breaking heat, a storm front rolled into the region early Tuesday, bringing cold temperatures and light rain. But as the day wore on, more spectacular weather arrived.

{BEACH LIGHTNING} All Los Angeles County Beaches are CLOSED due to lightning. Lifeguards are clearing the water and advising patrons on the beach to seek shelter immediately. The Lifeguard Division is working with @NWSLosAngeles to monitor the current storm cell. pic.twitter.com/fkNV2xENgT

Snow that fell across the 5 Freeway near the Grapevine brought traffic to a crawl.

And residents from Brentwood to Pasadena reported pea-sized hail pounding the area, including around the Rose Bowl, where the blanket of white made some wonder whether it had snowed. Some areas also reported sleet, a type of frozen precipitation.

Instability in the atmosphere prompted some of the more sensational observations toward the end of the work day, weather service officials said.

“It was very unstable,” said David Sweet, a meteorologist with the Oxnard station. “What I mean by unstable — the atmosphere was very cold aloft and that created the appropriate conditions for what we call convection.”

Sweet was at his home in Simi Valley on Tuesday afternoon when a thunderstorm rolled overhead.

“It definitely led for an interesting evening,” Sweet said.

Despite the proverbial fireworks, rain totals were relatively low.

Perhaps the most pronounced change was the sudden return to sweater weather. Temperatures in Los Angeles County topped out Tuesday in the mid-50s to the mid-60s.

The sizzling temperatures were fanned by Santa Ana winds and helped spur the growth of two fires — the Emerald blaze in Laguna Beach and the Sycamore near Whittier, respectively.

West Los Angeles broke back-to-back records over the weekend. On Saturday, UCLA recorded a toasty high of 89 degrees, one degree above the previous record. On Super Bowl Sunday, UCLA record 87 degrees, again breaking the daily record by a single degree.

Temperatures are now creeping back up, though they’re not expected to reach record highs.

Weather for the parade honoring the Rams’ Super Bowl victory will be sunny and mild, with highs in the low to mid-60s.

By sunrise Thursday, potentially strong Santa Anas are expected to return. Gusts could reach 50 to 60 mph in the Los Angeles and Ventura county mountains, while the valleys will likely see speeds from 45 to 50 mph.

Temperatures also will tick up slightly amid the winds. Highs are projected from 65 to 70 degrees.