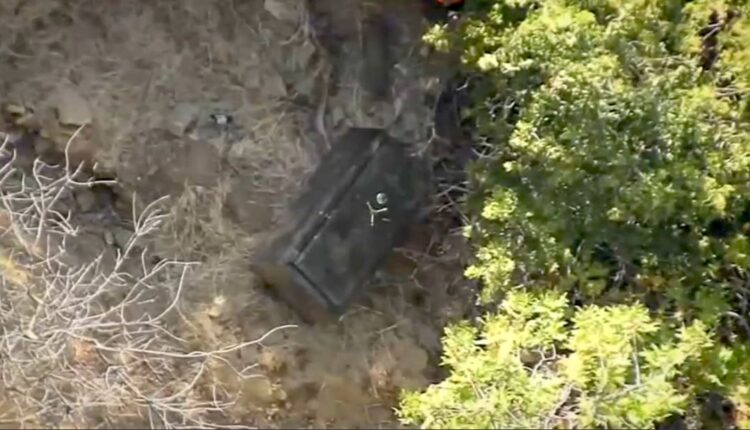 A shared question was on the minds of residents Tuesday night near a scenic overlook off Mulholland Drive in the Hollywood Hills.

What’s in the safe?

The wild speculation began when Los Angeles firefighters with heavy rescue equipment pulled two large safes Tuesday afternoon from the brush-covered canyon. The mysterious discovery was made near the Universal City overlook, which offers sweeping views of the San Fernando Valley to the north.

Instead of expansive views, residents took in a more unusual sight at the location when an approximately 4 1/2 foot, 600-pound steel safe was pulled from thick brush. When fire-rescue personnel retrieved that safe, they spotted another smaller safe not far away.

Both were pulled up the hillside using slowly ropes during a three-hour operation in steep and rough terrain.

The smaller safe turned out to be empty, but the second remain locked Tuesday night. The safes were taken away by the LAPD.

“It could very well have been taken in a burglary or robbery,” said LAPD Detective Tim Kirkpatrick. “It’s evidence and we want to follow up on all leads possible.”

Kirkpatrick said the LAPD has a team of professional safe-crackers who could set to work on the large safe Wednesday.