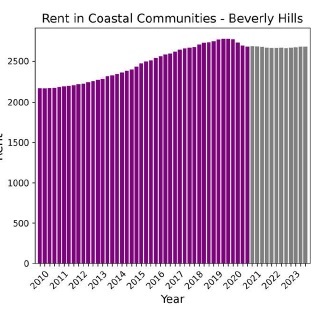 Nov. 12, 221 – A report released this week by USC’s Lusk Center for Real Estate predicts a 1 percent decline in rental growth for coastal communities in an area that includes Santa Monica.

The centre’s Spring 2021 Multi-Family Report noted a general shift in southern California that resulted in renters moving to remote communities, driving prices up and vacancy rates falling, during the cornonavirus pandemic.

“The further you get away from the city of Los Angeles, the greater the potential for rent increases seems to be,” says the forecast.

The largest gains were in the Inland Empire, followed by the southern end of Orange County, Ventura County, and the suburb of San Diego, the report said.

While a number of factors – including the speed of recovery from the coronavirus pandemic – remain unclear, the report predicts the shift will reverse over the next two years.

The vacancy rate is expected to remain at 3.9 percent, according to the report, which is based on data from CoStar Realty Information Inc. and the US Census Bureau.

The recent “large-scale move from central cities to the suburbs” was driven by the coronavirus shutdown, which allowed an unprecedented number of employees to work from home, the report said.

“The formwork of office buildings and facilities such as restaurants reduced the willingness of tenants to pay a rent surcharge in centrally located locations,” the authors write.

“When there is no more commuting and there are no more meeting points, tenants find cheaper, larger apartments in mostly less favorable locations more attractive and therefore move.”

The shift to teleworking resulted in a “sharp rise in vacancies” in downtown LA, Koreatown, Beverly Hills, Burbank-Glendale and coastal LA Counties.

The trend was accompanied by a “sharp drop” in vacancy in all markets of Inland Empire, the suburbs of San Diego County, Southern Orange County and Ventura County, according to the report.

Whether the pattern will reverse and tenants from the suburbs will return to the central cities remains to be seen, said the forecasters.

If Los Angeles achieves herd immunity, “we could expect some, and perhaps significant, reversal in population flows from the central parts of the region to the more suburban parts,” the report predicts.

California’s population loss is also contributing to rental trends, according to the report.

“For the first time since California became a state in 1850, California has lost population,” the forecasters wrote.

In addition, a decrease in mortgage interest rates “made home ownership in the suburbs particularly attractive compared to renting in the city.

“So, in addition to suburban apartments, central city apartments also competed with the residential market,” the report says.

That could change, however, as “prices have since risen so much that the cost of owning is the same or higher than it was before COVID started”.

What makes the forecast even less clear is the impact of the stop on evictions at various levels of government that have “allowed tenants to stay in” but, in many cases, are causing significant rents.

Vacancy rates could rise if even a fraction of the 459,000 Los Angeles and Orange Counties households that reported in late April reported being or were in arrears with their rent or mortgage payments are evicted.