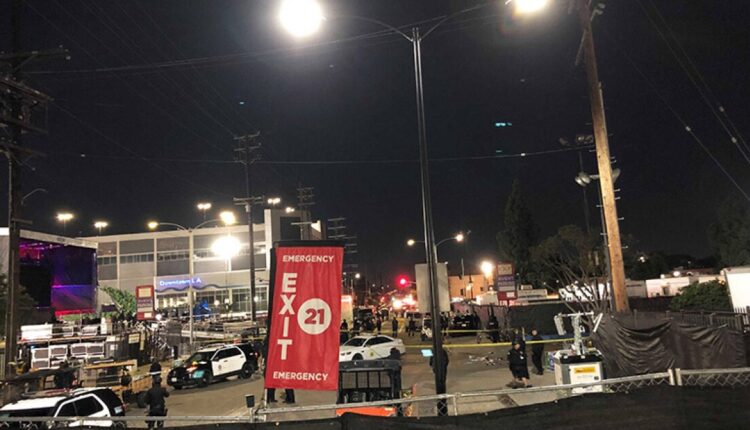 One person was stabbed to death Saturday night at the Once Upon a Time in LA concert at the Banc of California Stadium in Exposition Park.

Paramedics responded to a knife stab call at around 8:40 p.m. in the 3900 block of South Hoover Street, said Margaret Stewart, public information officer for the Los Angeles Fire Department. One person was taken to hospital in critical condition, she said.

The person has not been identified. But one person with direct knowledge of the incident told the Times that hip-hop artist Drakeo the Ruler was attacked and seriously injured by a group of people at the music festival.

The rapper was supposed to perform at the music festival, which also included a number of popular rappers like Snoop Dogg, Ice Cube and 50 Cent.

The rapper, whose real name is Darrell Caldwell, was “injured quite badly” although it wasn’t exactly clear how he was injured, according to the source, who requested anonymity to openly discuss the matter.

A source said a video captured the aftermath of the stabbing and showed people running onto the stage and security forces trying to end a fight. The victim was apparently behind the scenes when they were attacked.

Shortly after the stabbing, the organizers ended the event when the patrons got out. Los Angeles police said on Twitter that an “incident” had occurred at the concert, but did not provide any details. “The festival ends early. LAPD will be on hand to help [California Highway Patrol] with the investigation, “said the agency.

The music festival went behind schedule. Snoop Dogg was supposed to be performing at 8:30 p.m., but a DJ on the main stage had played for about 45 minutes.

At around 9:20 a.m., the backstage entrance seemed to be closed to everyone except the police. Some people with artist bracelets were turned away. At least 20 officers gathered behind the main stage, which had yellow police tape on it.

There was no live announcement from the festival organizers until 9:30 p.m.

Los Angeles police were unable to confirm the victim’s identity.

A Live Nation spokesman said in a statement: “There was an argument on the street backstage. Out of respect for those involved and in coordination with the local authorities, the artists and organizers decided not to continue the remaining sets, so the festival ended an hour earlier. “

“You know that everyone is into everyone’s business and one person said, ‘Oh yes, because Drakeo was stabbed,'” Arias said in an interview. “Then another person confirmed it, and then it was like the monkey game where everyone kept repeating a version of what was happening.”

Arias, who worked as a photographer on the event, said one of her artist friends was in the area when the incident occurred.

Shortly afterwards, the festival security ordered them to return to their vehicles and set off. But Arias and a few others got stuck in the Kerfuffle and are still waiting in their cars, artist lounge and caravan to leave the festival site.

A native of LA, 28-year-old Caldwell has released 10 mixtapes and released his first studio album earlier this year. He recorded a mixtape, “Thank you for using GTL,” a reference to prison communications company Global Tel Link, with verse taped over a phone while he was incarcerated at Men’s Central Jail and his trial in connection with the murder of a 24-year-old waiting in 2016 -old man.

Caldwell was acquitted of the crime and attempted murder, but Los Angeles County attorneys attempted to re-indict him for murder conspiracy. The second case was eventually settled with a plea deal and Caldwell was released from custody in November 2020.