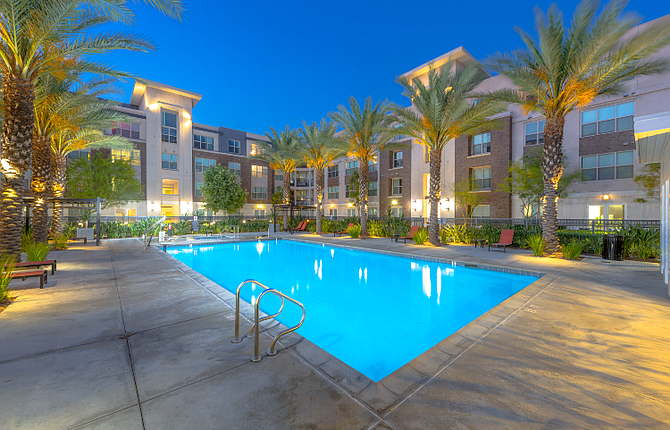 Two trends that have gained momentum in the second half of 2021 show the potential to become the norm this year: modular housing and dedicated office designs. Both help developers and owners save time and money.

The downtown office vacancy rate rose to 21.2% in the fourth quarter from 19.9% ​​in the previous quarter and 18.3% a year ago. There was no office product under construction during the quarter and negative 160,991 square feet of space was absorbed by the market. Asking rents were flat quarter-on-quarter at $3.83 per square foot, but down 2 cents year-over-year.

A 199,860-square-foot historic downtown building known as the May Co. Garage building has received a $10.7 million loan to refinance.

Clothing and accessories retailer Johnny Was signed a lease for 400,000 square feet in an office building at 712 S. Olive St.

East End Capital acquired a warehouse space at 2233 Jesse St. for $43 million with plans to convert the cold storage facility into a production studio. It is located in Boyle Heights near the downtown border.

Hollywood’s office vacancy rate fell to 29.2%, down from 30.9% in the previous quarter and up from 19.3% a year ago. Rents rose to $5.21 per square foot, up 3 cents from the prior quarter and year over year. Net absorption was 331,151 square feet with no office properties under construction during the quarter.

According to the Commercial Observer, Onni Group of Cos. a historic building called Romaine and Sycamore in Hollywood for $40 million.

The Westside office vacancy rate fell to 18.5%, down from 18.6% in the previous quarter but up from 12.6% a year ago. Marina del Rey had the highest vacancy rate at 28.4%, while West Hollywood had the lowest at 11.8%. Asking prices for Class A space on the Westside were $5.62 per square foot, up 3 cents sequentially but down 1 cent year-on-year. There were 2 million square feet of office space under construction, including 655,632 million square feet in Culver City and 1.3 million in West LA. During the quarter, 113,371 square feet of net absorption was recorded on the Westside.

An unnamed buyer purchased property from the Harkham family at 360 N. Rodeo Drive for $200 million.

Armata Pharmaceuticals Inc. signed a lease for 56,300 square feet in a new headquarters building at 5005 McConnell Ave. in DelRey.

Office vacancy in the Santa Clarita Valley increased 22.1%, compared to 21.2% in the previous quarter and 17.8% a year ago. Net absorption was minus 22,693 square feet and there was no office product under construction. Asking rents were flat quarter over quarter but fell 5 cents year over year to $2.87 per square foot.

A one-story, 7,580 square foot Class A office building at 21080 Center Pointe Parkway in Santa Clarita has sold for $2.6 million.

The office vacancy rate in the San Fernando Valley rose to 18.9% from 18.1% in the previous quarter and 16.4% a year ago. Rents were flat quarter-over-quarter, but declined 1 cent year-over-year to $2.94 per square foot. Net absorption was negative at 239,595 square feet and 306,673 square feet were under construction.

Hackman Capital Partners of Culver City and Square Mile Capital Management of New York entered into an agreement to purchase the 55-acre CBS Studio Center for $1.85 billion from ViacomCBS Inc.

A detached industrial building at 758 Arroyo Street in San Fernando sold for $1.7 million.

A private investor bought a 1.5-acre shopping center in Canoga Park for $9 million with plans for redevelopment.

Office vacancy in the Tri-Cities submarket of Burbank, Glendale and Pasadena rose to 15.5% in the fourth quarter, up from 15% in the previous quarter and 13.6% a year ago. Negative 19,785 square feet were absorbed during the quarter while 1.3 million square feet were under construction. Rents were flat quarter-on-quarter but increased 9 cents year over year to $3.67 per square foot.

Jonathan Rose Cos. purchased a 313-unit affordable condominium complex known as the Kings Villages Apartments in Pasadena for $223 million.

Waterford Property Co. and the California Statewide Communities Development Authority bought Westgate Apartments, a 480-unit complex in Pasadena for $280 million with plans to convert it into middle-income housing.

Wilshire Corridor’s office vacancy rate rose 29.4% in the fourth quarter, up from 27.4% in the previous quarter and 23.3% a year ago. A negative 182,441 square feet was absorbed by the market and there was no new office product under construction. Asking rents fell to $2.56 per square foot, down 3 cents sequentially and 36 cents year-on-year. Asking rents in Miracle Mile were much higher at $4.41 per square foot.

TDI Properties Inc. acquired a portfolio of three multifamily properties known as the Elevate LA Portfolio, which had properties in Central LA, Koreatown and Pico-Union, from a Colorado-based family for an undisclosed sum.

CenterPoint Properties acquired an industrial property from Signal Hill Petroleum Inc. at 2550 Orange Ave. in Signal Hill with plans to convert the 9-acre property into a 100,147-square-foot warehouse.

The Onni Group of Cos. acquired a 14-acre lot at 6500 E. Pacific Coast Highway in Long Beach, earmarked for redevelopment into a $68 million multi-family home.

The Los Angeles Chargers announced plans to build Continental Development Corp. on a 14-acre site. and Mar Ventures Inc. in El Segundo to build a new headquarters and training center for more than $100 million.

Brentwood-based Rexford Industrial Realty Inc. acquired property at 21515 Western Ave. in Torrance for $19 million with plans to redevelop the site.

CenterPoint Properties acquired a portfolio of three industrial properties on Via Oro Ave. 4061 in Long Beach, 4250 E. Greystone Drive in Ontario and Palomares Ave. 1300 at La Verne for an undisclosed sum.

Waterford Property Co. and the California Statewide Communities Development Authority bought a 472-unit gated community in Pomona for $149.4 million with plans to convert it into middle-income housing.

For reprint and license requests for this article, CLICK HERE.