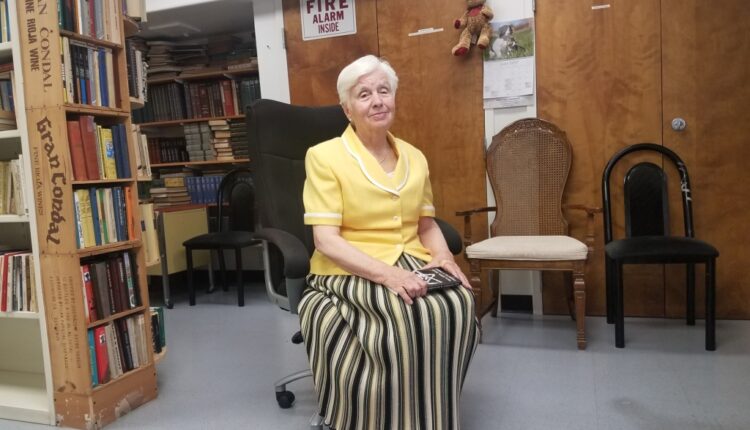 Southern California’s Ukrainian and Russian expatriates woke up — if they ever went to sleep in the first place — to a homeland at war on Thursday, Feb. 24.

“I’m scared but not for myself,” said Sofiya Fikhman 83, a Russian Jew who now lives in West Hollywood. “I’m afraid for young people and their families.”

Just a week ago, many had held out a tenuous hope that the rhetoric of a Russian invasion that has roiled the world for days would not become reality in their nations. And then came Thursday, when the bombs started dropping.

Russia launched what is said to be the nation’s most wide-ranging assault on a nation since the 1970s, hitting Ukrainian cities and bases with airstrikes or shelling.

From thousands of miles away, residents in LA County, home to an estimated 26,000 Ukrainian expats, the images, the sounds were chilling as they flashed across TV and computer screens: Air raid sirens, civilians piled into trains and cars on jammed roads fleeing the carnage to get across the border, ominous mushroom clouds in what was a country at peace. They watched as a defiant President Vladimir Putin warned of “consequences you have never seen” to any nation trying to intervene, as he referred to his country’s nuclear weapons.

A Ukrainian soldier runs after explosions hit near his unit’s position on Wednesday, Feb. 23, 2022, in Zaitseve, in the Luhansk region of eastern Ukraine. Russian mercenaries with experience fighting in Syria and Libya have covertly tricked into two rebel territories in eastern Ukraine, helping to lay the groundwork for war, according to two senior European security officials. (Tyler Hicks/The New York Times)

They watched as Ukraine’s leader defended a nation. Words of war: “Russia has embarked on a path of evil, but Ukraine is defending itself and won’t give up its freedom,” Ukrainian President Volodymyr Zelenskyy tweeted.

Ukrainian expat Kyrylo Ledovskoy, from Santa Monica, whose parents live in Kharkiv near the Ukrainian border, said they woke up early in the morning from the sound of an explosion as their house and windows were shaking.

He couldn’t sleep last night, reading the news and checking on his parents, who have been plagued with a poor internet connection since explosions rang through the city last night.

“Nobody expected that things would escalate so quickly,” he said.

Ledovskoy said besides feeling furious about the situation at home, he feels frustrated with the Western reaction.

“I’m shocked but I’m also angry,” he said. “I worry that if all the West is going to do is wag its finger, there’s going to be bloodshed.”

Fikhman was 3 years old when the war between Germany and the former Soviet Union began. Her father joined the Soviet army as her mothers and grandparents were forced to flee their hometown in Ukraine’s Odessa Region on foot before being forced to live in a Nazi-occupied ghetto.

She said watching the news about the conflict between Russian and Ukraine triggers painful memories of her evacuating with her family during World War II.

Just the idea of ​​war between the two nations was keeping her up at night.

“I pray for peace every day,” she said.

That peace was shattered as reports that Russian troops landed in her homeland, in the city of Odessa, and were crossing the border in the city of Kharkiv came in. Other reports described Russian helicopters attacking Antonov International Airport, a military airport in Hostomel, near the Ukrainian capital Kyiv, on Thursday. The Interior Ministry confirmed that Russian troops have seized control of the airport, according to CNN.

Like many other expats, Ledovskoy communicated with family and friends overnight, hearing first-hand what those inside Ukraine and Russia were seeing and hearing.

They described the family hearing bombs exploding in the distance. The thunder of Russian military planes. And there was the thought for many of having family on both sides of the border, the torn sense of connection to both the invading nation and the sovereign nation being invaded.

Even as late as last week, many expats held out hope this would not be happening, even suggesting such war could not happen, precisely because of those strong historical and cultural bonds.

Indeed. Ordinary Russians and Ukrainians get along fine, Robert English, director of the USC School of International Relations, told this news group.

“They really just want to live a good life but the failures of their political and economic leaders, have divided them and pitted them against each other,” he said, adding that the issue of Russians and Ukrainian self-identity turned into “identity games ” by politicians on both sides.

All former Soviet republics, including Russia and Ukraine, are “kind of wounded, even crippled in terms of their own self-understanding, their conception of their place in the world of who they are, their identity,” he said.

For nearly 70 years, they were all denied independence, the sovereignty to pursue their own calling and their own best interests, English added.

But now, the bombs have come.

This is a developing story. More to come.