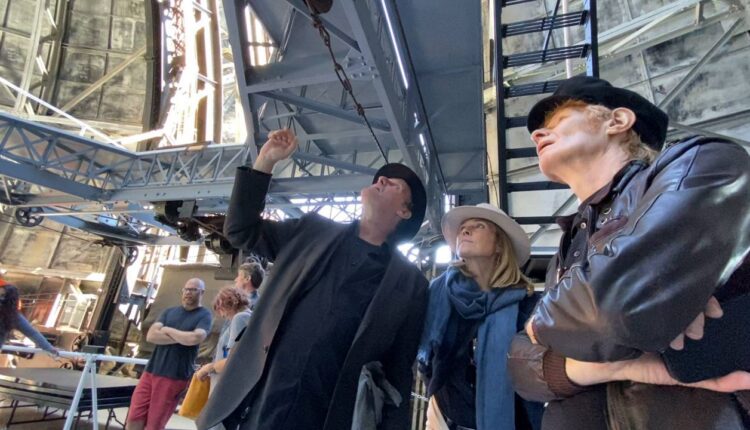 LOS ANGELES — Standing over 5,500 feet above sea level, the Mount Wilson Observatory is home to the famous 100-inch Hooker telescope used by Hubble to prove the universe was expanding. It also houses a small astronomical museum where Robert Takahashi Crouch isn’t ashamed to telescope his genuine awe.

“This is, in many ways, the center of the universe,” he gushed as he made his way past a collection of antique devices, “because this is where those first measurements were taken.”

He admits there was a time when he thought about a career in astronomy. Stargazing is fascinating. Star studying? Well, that can be tedious.

“Like it’s looking at microscopic differences in light fluctuations,” he said.

Instead, Crouch turned to the arts. Although the way he sees it, it’s not too big of a pivot.

“You know, a lot of scientists are engaged in creative and very experimental lines of inquiry,” he explained.

It’s that intersection of art and science — the A in STEAM — that’s the focus of the annual Fulcrum Festival. As executive and artistic director of Fulcrum Arts, Crouch looks for ways both disciplines can contribute to positive change through visual arts, performances and symposiums. This year’s theme is Deep Space, Deep Ocean and when Crouch approached Carl Michael von Hausswolff about doing an installation in Los Angeles, the Swedish artist dove right in.

For freq_wave, von Hausswolff tapped 12 artists to work on specific sound frequencies, which he then mixed and pipes through speakers all around the historic telescope, where, he says, “the sound reverberates and kind of adds into itself and actually creates lower frequencies. ”

The full effect sounds like the ocean, full of seemingly far-off echoes that resemble whale song. And maybe it actually is. The artists used actual field recordings of the Pacific Ocean so that visitors to this mountaintop location will be audibly submerged in the sea far below, a sea that Carl Michael points out has a lot of problems.

“The ocean is polluted,” von Hausswolff said. “We have problems, not only with pollution but also overfishing. The coral reefs are dying, and I just wanted to show that we artists also are concerned. Maybe we can’t do so much about it as individuals, but we can at least show other people we are concerned and maybe they can be informed about what’s going on.”

He says instead of exploiting the ocean and exploiting nature, “we should collaborate with nature because we’re nature too.”

As the telescope fixes its sights on far-off locations, so does the human imagination. Crouch believes there’s a direct connection between climate change and the current drive to look for new frontiers.

“You have the privatization of space travel happening. You have Elon Musk wanting to colonize Mars. Why? Why is this becoming very topical?” he said. “We’re looking for water. We’re looking for life in outer space. I wanted to really make sure that those conversations were happening simultaneously.”