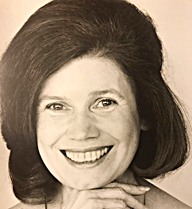 S. Loraine Boos Hull Smithers, Ph.D, known professionally as Lorrie Hull, author of “Strasberg’s Method” died peacefully in her sleep of natural causes in Santa Monica, CA.
She was born in West Bend, Iowa, to Myron and Vera Cleal Boos. She was valedictorian of her class and won state awards for piano solos. She was crowned “Miss West Bend” in 1946.
Lorrie was a graduate of Drake University where she met her first husband, John C. Hull. They settled in Fond du Lac, Wisconsin, where Lorrie became the founder, president and director of Fond du Lac Community Theater, directing over 200 plays and winning numerous awards. She served on the Governor’s Arts Council, as well as board member and president of the Wisconsin State Theater Organization. She was named that group’s first “Theater Woman of the Year.” She was a delegate and workshop leader to International Theater Conferences throughout the world. She was a founder and first president of the North American Regional Theater Alliance.
She received her Masters degree in Drama from the University of Wisconsin, and later a PH.D. in Los Angeles, CA. In 1976, she was a delegate to the Democratic National Convention.
Lorrie Boos Hull was a senior faculty member for Lee Strasberg for 12 years, as well as a drama instructor for 5 years at the American Film Institute. She taught acting privately for many years in Santa Monica while coaching actors for film and television. For 25 years, she and her husband, William Smithers, hosted a talk show at TVSB in Santa Barbara called “Just Between Us” giving notice to those who wanted to be heard. In 2019, she was given the Legacy Award from TVSB, as well as a Congressional Certificate “in recognition of her outstanding and invaluable service to the community.”
Lorrie is survived by her husband, William Smithers, daughter Dianne Hull, son, Donald Hull (Debra), grandchildren, Emily Hull Bellaci (Ross), Evan Byron Hull (Lacie), Brendan Gillespie and great-grandchildren, Samantha and Andie Bellaci.
Lorrie was preceded in death by her parents and her brother, Byron Cleal Boos. Lorrie, a lifelong member of ALCOR, is to be cryogenically suspended with hope of being reanimated in the distant future.

LA needs to be laser-focused on affordable housing