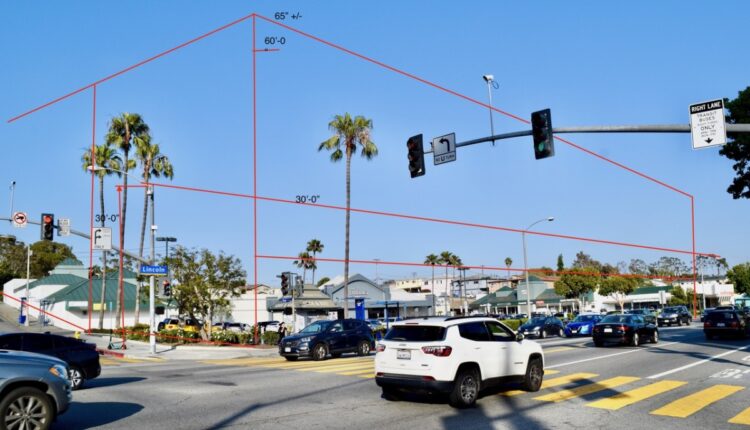 This week we are re-visiting an article from 2018 regarding the Miramar project, by simply replacing the word “Miramar” with “Gelson’s”, and striking thru some of the irrelevant text. We sadly reflect on how the runaway train wreck of over-development has not been slowed or reduced by city administrators or staff policies regardless of the cries and demands of the residents over the years. Oh well…adaptive re-use is generally a positive approach to building, so why not op-ed’s too.

The Fairmont Miramar Hotel Gelson’s site developer has released its revised design concept, and, not unexpectedly, the local resident responses, per several local Facebook pages, has been one of great concern and rejection, eliciting what appears to be a couple hundred comments. The project is massive, and creates a visual barrier, a wall, along 2nd Street Lincoln Blvd., effectively separating itself from the adjacent neighborhood rather than transitioning in a scaled manner. In doing that it has the feel of saying to the residents, stop, the ocean views blue sky and fresh breezes are for our guests and wealthy condo owners, not for you. You get shadows and the wall.

What does our City’s Land Use Circulation Element (LUCE) say about this? Well, it states a primary goal is to:

“Maintain The Character Of Santa Monica While Enhancing The Lifestyle Of All Who Live Here.”

The proposed structures are so out of scale with the “character” of our beach community as to leave one hard pressed to believe that our Planning Commission, Architectural Review Board (ARB), and ultimately our City Council, would give serious consideration to its approval . It remains to be seen what their reaction will be as if it comes before them in the days ahead. Unfortunately their track record of late, for approval of inappropriate and/or over scaled projects, is not encouraging. Witness the Hines project, the Gehry Hotel and the Santa Monica College “daycare” compound on our Civic Center land, which is likely to serve precious few residents, if any. Residents were forced to petition for a referendum to stop the massive Hines development as their protestations fell on the deaf ears of the last City Council. This Gelson’s project, if approved as presented, may not be subject to referendum as the City has modified its approval process since losing Hines. 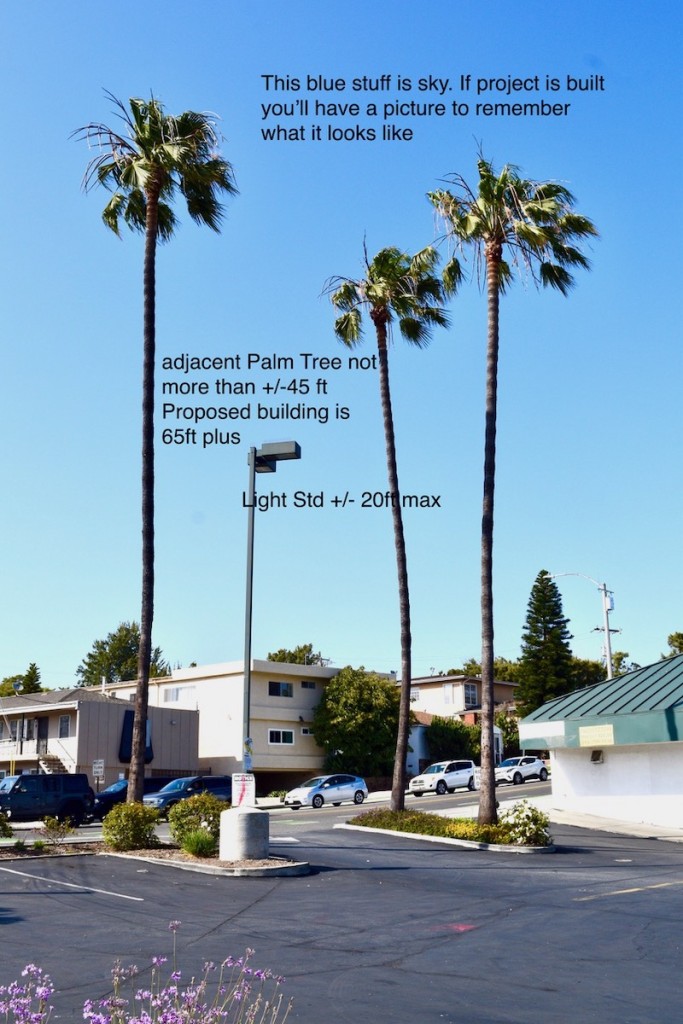 The Miramar Condo Gelson’s project team will argue that it is in conformance with the new Downtown Community Plan (DCP) (MUBL) zoning guidelines for height and density as one of three “large” (think “spot zoned”) sites, but by all outward appearances it raises serious questions. Floor Area Ratio (FAR) calculations are allowed to exclude a significant number of square feet by definition, eg all stairs, elevators, ramps, mechanical and other peripheral areas…so it is conforming, but does not describe the actual FAR. While the project lists a 2.61 2.25 FAR, in reality it would be larger. Per resident responses, height is an issue for most. TheDCP MUBL allows 130ft 36ft (plus another 18ft for mechanical equipment covering 20 percent of the roof, for a real height of 146ft an allowed base height of 54ft ). The site is in the Ocean Transition (OT) zone and if it were not treated with an “overlay” it would have a maximum 50 ft height limit, and would break up the 900 ft length with required wide, open, ground to sky, separations.

The State, however, has bestowed bonus density favors on developers if they provide a minimum of 15% very low income units in the base project, thereby granting a 50% increase in density and height, and all without requiring any additional affordable units. As such, the Gelson project doubles the allowable height and adds 50% more market rate units with zero increase in affordable units, thereby reducing the total percentage of affordable units from 15% to 10%. A total distortion of intent, and a giveaway to profitability while creating an environmental nightmare for the adjacent neighborhoods and an unimaginable traffic disaster with 880 cars entering a dedicated bus lane at peak traffic hours. In addition, the actual height of the project, as currently designed, is floating above the site on a non-existent imaginary ‘slope’, that was graded flat 70- years ago, effectively adding another 30ft of height for a potential total height of 118Ft from the existing flat grade at the rear of the property. It is a very big building complex for our beachfront town.

So what does the LUCE have to say about scale and heights?

“It is a conservation plan that provides for an overall reduction in building height.”

hmmmm Maybe there is some confusion about how to reduce heights, but I think it generally comes from lowering the height rather than raising it. And if this project receives approval, along with the Gehry Hotel anchoring the mid-point of our Ocean Avenue, we will be hearing most assuredly from other developers that they too want their piece of the sky. We see noted in the City crafted DCP that “the Clock Tower is 196 ft”, and the 300ft tall 100 Wilshire building is highlighted, etc., apparently showing precedents for developers to use to justify asking for maximum heights. The Miramar Condos/commercial building starts along Wilshire and is 600ft long along 2nd Street and then, without a break, another 300 ft along California Avenue, replacing the existing classic one story bungalows currently there. In essence a 900’+ building on its side.

“The LUCE Framework introduces the requirement that new development must contribute to, not detract from, the community. Each future project must exhibit extraordinary community benefits as well as compatibility in scale, setting and transitions to residential neighborhoods.”

There is nothing about the Gelson proposal that fits that LUCE requirement, as in addition to the height and massing disaster, it removes and diminishes the amount of neighborhood serving businesses and removes the only local supermarket serving Ocean Park and Sunset Park residents.

The most common comments about the proposed Miramar Gelson’s are that it belongs in “Miami Beach”, that it is typical of “corporate” and high end tourist resort areas, that it is “way too big”, “out of scale”, will be a “traffic disaster”, and brings nothing to our resident quality of life. One concession or “benefit” noted is that the design opens up and exposes the landmark Moreton Bay Fig Tree. As desirable as that may be one has to question the value of that as justification for a project so out of scale to our community. There are no benefits brought to our community. What are the other “extraordinary community benefits” to the residents if the Miramar Condos are Gelson is allowed to be built? There are some very low income residential units to be built off site on site, only 10%, and nothing more. and some are said to be “affordable”, that somewhat dubious So Called Affordable Housing (SCAH). But once again a jobs/ housing imbalance is created as the number of units that a hotel worker can afford is likely to not even be close to the number of employees a massive project like this will generate. So, “Einstein’s” definition proves itself true (though he never really said it!): “doing the same thing over and over and expecting a different result is the definition of insanity”. This project does not address the only issue of importance – affordability.

This project is designed for high end condo buyers income tenants and the tourist trade, and provides virtually nothing to enhance the lifestyle or life experience of the existing residents. Developers can build for that demographic if built to the allowed standards of the zoning codes, but if they receive bonuses in the form of increased heights and density it should benefit the residents. The DCP was State and City bonuses are were shaped to give away this site, the Gehry site, and the 4th/5th and Arizona site, to developers, not to enhance the residents lifestyle, or to reduce heights, or to be scaled as the LUCE states, to “reflect the identity , values ​​and vision of this singular beach community”. This project does not do that.

Trailblazing female comics get their due in ‘In On the Joke’