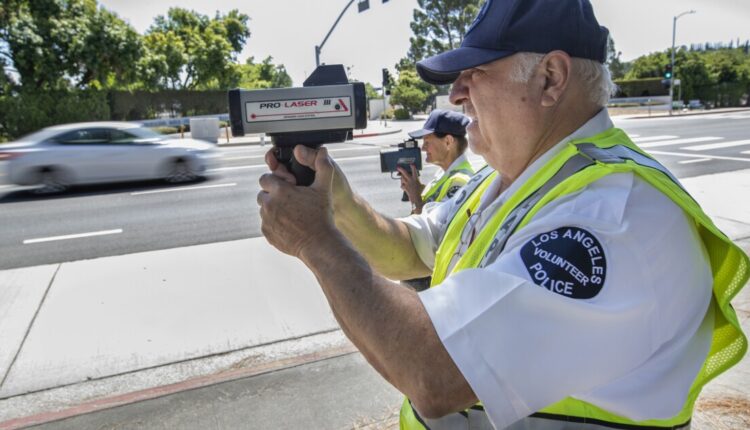 For years, Los Angeles traffic planners have been in a bind, largely prohibited under state laws from reducing speed limits even as vehicle deaths climbed to record levels.

But a change in a law last year gave local officials some leeway, allowing Los Angeles for the first time in decades to lower speed limits on major corridors.

On Tuesday, the City Council took action, unanimously approving a plan to lower speed limits by 5 mph on 177 miles, or about 2%, of city streets. The move was hailed by pedestrian advocates and city officials alike as a small but significant step toward safer streets in a city that has been unable to rein in deadly crashes.

“This was just a silly regulation that has nothing to do with urban areas,” said Councilman Paul Koretz, who said he was forced to increase the speed limit at Overland Avenue and Olympic Boulevard in order to get more traffic enforcement after a deadly accident.

Speed ​​limits will be reduced on major corridors from the San Fernando Valley to South Los Angeles where many pedestrian deaths and injuries take place.

The Valley, with its wide boulevards, has historically had among the highest rates of pedestrian deaths, but when the pandemic hit South LA, including the Harbor area, took that spot, according to city data.

The new rules attempt to correct decades-old state laws that forced local officials to either raise the speed limit or lose the ability to write tickets.

Speed ​​limits are roughly pegged to the flow of traffic, and planners in LA and across California would often find that after conducting a traffic survey on roads filled with speeding drivers, they would have to raise the limit, not lower it.

The phenomenon became known as “speed creep.” Many local officials, including Koretz, complained that the rules intended to prevent speed traps were outdated.

“It’s a huge step in the right direction,” said Michael Schneider, founder of Streets for All, a nonprofit that advocates for safer streets.

Los Angeles Mayor Eric Garcetti, who has set a goal of ending traffic deaths by 2025, is expected to sign the ordinance. Daniel Mitchell, chief engineer at the city’s Department of Transportation, said he expects to have new signs along city streets by June.

Excessive speed is playing a larger factor in collisions, according to the transportation department. Car crashes killed 294 people on city streets last year, the highest total since 2003. Of those crashes, 132 pedestrians involved.

Friedman introduced a bill this month that would allow Los Angeles, San Francisco, San Jose, Oakland and two other cities to use cameras to enforce speed limits along their most deadly streets and near schools. The move comes amid renewed federal attention on vehicular deaths.

Nationwide, traffic fatalities jumped 18% in the first six months of 2021, according to preliminary figures from the federal government.

“When traffic violence is one of the leading causes of children dying in this country, that’s a public health crisis,” Friedman said. “If we have these many people who die every day on our streets die in plane crashes in this country, we would ground our entire fleet in one day, and yet we’ve somehow come to accept deaths from cars as being just something that we need to live with, but we don’t need to.”