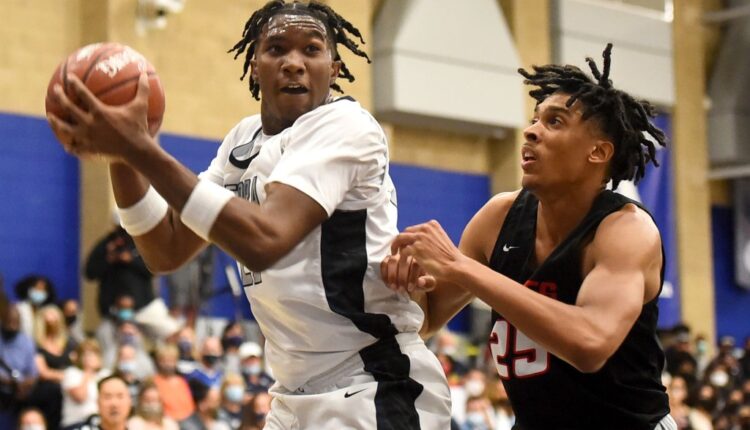 Despite the hoopla that surrounds the Sierra Canyon boys basketball program, his mild temperament can be seen through the flashing lights, rolling video cameras and yelling fans.

When he makes a jump shot, he immediately backpedals to defense with a focus on the next play. When he snags a rebound, he calmly finds a ball handler. When he throws down a two-handed dunk, it’s just another day at the office. Sometimes, you might even see him calm down his teammates when they’re fired up over a foul call or an emotional play.

He’s like the dad of the team in that sense.

The 6-foot-7 forward, headed to Howard University, is now a senior playing one game at a time in the CIF State regional playoffs. The team’s last loss — to Harvard-Westlake in the CIF Southern Section Open Division — qualified Sierra Canyon for the state tournament.

“That hurt really bad,” Odom said Wednesday after Sierra Canyon defeated St. Augustine in the first round of the CIF SoCal Open Division regional playoffs. “We watched (the final game) back this week and saw Harvard-Westlake and their fans celebrating on our floor. We didn’t like that.”

Now there’s no more second chances. It’s win or go home, and guess who the Trailblazers play next?

The Sierra Canyon-Harvard-Westlake rematch is set for Saturday night, but this time it’s at Harvard-Westlake. The two teams will provide the San Fernando Valley with another epic matchup in the CIF State Open Division regional semifinals at 6 pm The game will be broadcast on Spectrum 1.

Odom was a sophomore on Sierra Canyon’s team in 2020 that won the CIF-SS Open Division title. That team won the regional final, too, but the COVID-19 pandemic forced the CIF State championship games to be canceled.

Last year, the Trailblazers lost to Corona Centennial in the CIF-SS Open final then lost to Etiwanda in the regional playoffs.

The soft-spoken Odom, who hails from Massachusetts, knows that the Trailblazers, if they win Saturday, could end up facing No. 1-seeded Corona Centennial in the regional final Tuesday night.

It is not going to be easy to get to the CIF State Championship game in Sacramento on March 12.

“I made a complete switch after the Harvard-Westlake game in my approach to practice. I don’t want to come up short again,” Odom said.

After beating Sierra Canyon 63-60, Harvard-Westlake lost to Centennial in the Open Division final.

The Wolverines won their first-round game in the regional playoffs against St. Joseph of Santa Maria 63-55. The winner of Saturday night’s game will face the winner of Centennial vs. Bishop Montgomery in the SoCal Regional final Tuesday night.

Other teams playing in regional semifinals

In other boys regional semifinals Saturday (6 pm unless noted):

Notre Dame will play at Crean Lutheran in Division I.

Valley Torah will play at Long Beach Millikan at 8:45 pm in Division IV.