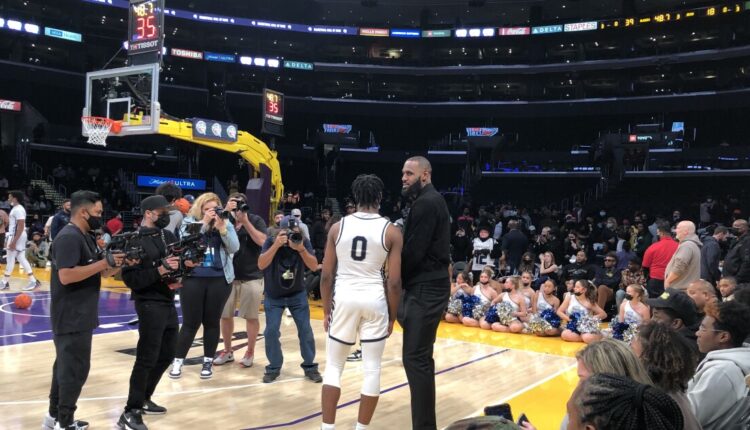 The stars left everything on the floor in the Staples Center on Saturday night.

No stars like LeBron James – although he was there. Rather, it was the turn of the stars of the future to step onto the hardwood in front of a crowd under purple-gold lights.

The Chosen-1’s Invitational, a James-sponsored basketball showcase event that featured four Nike Elite High Schools from across the country and showcased the immense talent of the Chatsworth Sierra Canyon boys and girls programs.

Ahead of NBA stars past and present – James, Zach Randolph, Metta World Peace, Russell Westbrook and Chris Paul all showed up once – the Trailblazers’ Bronny James and Juju Watkins dominated their matchups.

Bronny whizzed across the same pitch his father had for the Lakers home game, finishing the game with an efficient 19 points in 7-of-11 shooting from the field, a variety of deep looks and nifty transition finishes. While James clapped from the seats on the field, Bronny gave Sierra Canyon an early lead thanks to two catch-and-shoot threesomes in the first quarter and active defense that included pulling a charge.

“I felt special playing in the same gym he played in,” said Bronny after the game.

Amari Bailey, the Sierra Canyon’s five-star recruit and the Times’ reigning Basketball Player of the Year, was not playing on Saturday and was seen with crutches. Coach Andre Chevalier said he had a sprained ankle and would be absent from week to week.

Bailey was out to start the season with a foot injury but returned Wednesday night to score 23 points against Santa Clarita West Ranch. In his absence, a deep Trailblazers team performed. In addition to Bronny’s efforts, a dominant double-double – 17 points and 13 rebounds – came from Senior Shy Odom. Kijani Wright added 15 points and Ramel Lloyd scored 13.

As impressive as the Sierra Canyon boys played, Watkins won the evening. The hometown kid – Watkins is from Watts – attacked from the front and drew 18 free throws against Christ the King, while ending with 39 points. She nailed four three-pointers and nicked several echoing blocks that dominated the floor against Christ the King.

“I knew I had to do a show tonight, especially when I got home,” said Watkins.

The tournament’s other Southern California program, Fairfax, didn’t fare quite as well. The girls’ team lost 66-17 to St. Vincent-St. Mary, while the boys’ team lost 51:42 to Christ the King in a tough defensive battle.

Harvard-Westlake 79, Cajon 47: The Wolverines (8-0) have won the Maranatha tournament. Cameron Thrower had 22 points for the win.

Simeon 64, Mater Dei 50: In Chicago, Zack Davidson got 25 points in the defeat of the Monarchs.

Without the star running back, Scripps Ranch goes on air to achieve the state title