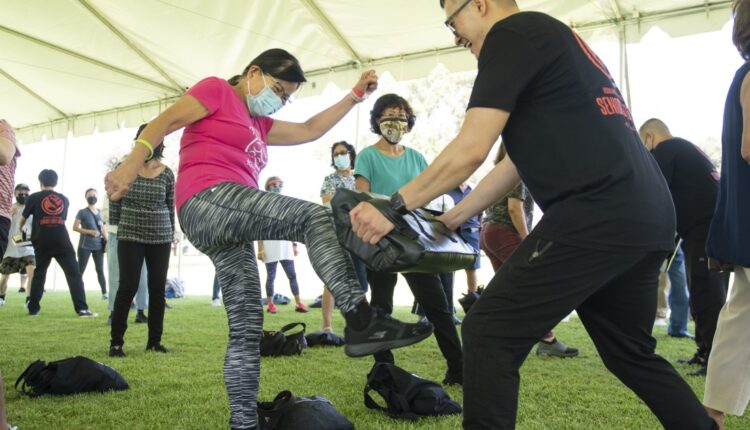 In June, a 70-year-old Filipino American was slapped in the face in Don Knabe Park in Cerritos.

The attacker told the man to “return to your country”.

A month later, dozens of Asian-American seniors were practicing self-defense moves in the same park where the attack took place.

The seniors wore sun visors and fanny packs and kicked, hit and pushed.

Sovanna Yeang, 65, practiced groin kicks and slapped her leg in a foam pad that a volunteer held in front of his crotch.

Yeang, who is a Chinese Cambodian, said she was concerned for her safety after watching TV news of attacks on elderly Asians.

Tom Yee from Cerritos practices his hammer blow during the Seniors Fight Back workshop at Don Knabe Community Regional Park in Cerritos.

“When someone attacked me, I didn’t know what to do,” she said. “I would just run. I couldn’t scream or anything. I’ve learned a lot now. I am no longer afraid. “

The self-defense course was organized by Seniors Fight Back, who formed earlier this year when hate crimes against Asians increased during the pandemic.

Recorded violent attacks against elderly Asians in the Chinatowns of Oakland and San Francisco have frightened some seniors so much that they hardly ever leave home.

To date, Seniors Fight Back has hosted four courses that have provided seniors with a basic understanding of how to defend themselves against an attacker.

“There have been so many attacks on our elders and I was really frustrated,” said Tony Dang, 32, a co-founder who owns a Vietnamese pancake catering company in Fountain Valley. 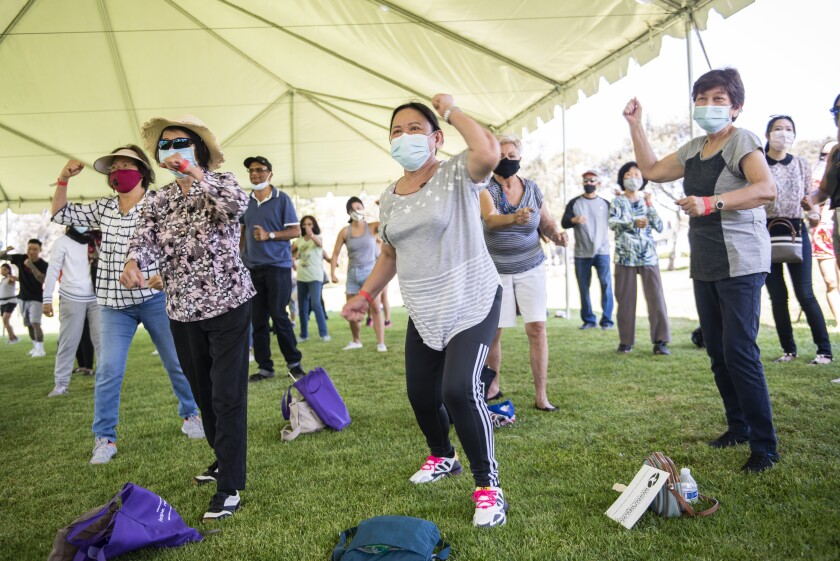 While some Asian Americans have organized volunteer patrols to escort seniors to their destinations, for Dang the answer has been in self-defense.

A friend, Andy Luong, shared an Instagram post about boxing classes that raise funds for Asian-American and Pacific Islander organizations.

Dang asked Luong to connect him with Box for Change, the group that runs the courses. Dang spoke to Hong Lee, the 35-year-old victim of a racist verbal attack in a Los Angeles restaurant who had attended boxing class.

The three began discussions that extended to a network of friends and acquaintances, including mixed martial arts fighter Ron Scolesdang.

Her first class, in Hawthorne on May 12, drew about 20 seniors. A few weeks later, more than 200 showed up in Little Saigon. You have now hosted five workshops, including one in Rowland Heights earlier this month.

The group of approximately 10 volunteers is aiming for charitable status and hopes to expand to other cities in Southern California and across the country.

In California, anti-Asian hate crimes more than doubled in the past year, according to the Attorney General.

Then-President Trump emphasized the Chinese origins of the coronavirus, and some people have attacked Asian Americans with rhetoric claiming they were responsible for the pandemic.

Older Asian immigrants who are attacked are often reluctant to speak up, said Linda Vo, professor of Asian-American studies at the University of California, Irvine.

Many are suspicious of the police, uncomfortable communicating in English, or ashamed of being victims, she said.

But the rise in anti-Asian attacks has mobilized many Asian Americans and encouraged them to share their experiences, according to Judy Wu, professor of Asian-American studies at the University of California, Irvine.

“The racist attacks are so intense that more and more people understand the need to speak out,” said Wu.

Self-defense courses for seniors have also established themselves in Little Tokyo. 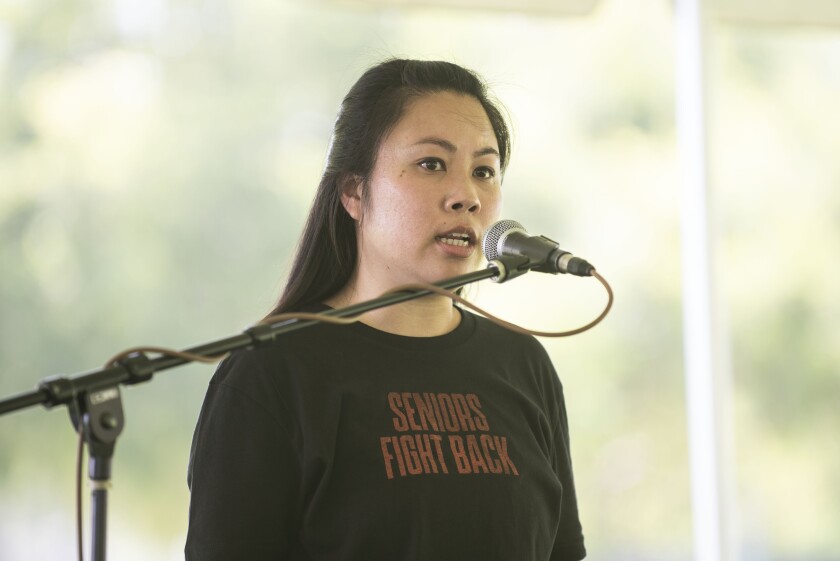 Hong Lee, President of Seniors Fight Back, shares her experience as a victim of an anti-Asian attack.

Most of the participants were low-income, monolingual Korean, Japanese, or Chinese-American seniors, Lee said. Almost all of them were female and some reported attacks.

“I started because I was really angry about what happened because when I watched the news I saw that most of the hate crimes were against seniors,” Lee said.

Art Ishii, who has been teaching martial arts in Little Tokyo for three decades, hosted two self-defense workshops in June.

“It’s sad that suddenly more self-defense is needed,” said Ishii. “It’s sad that we can’t just do martial arts or go about our business and play sports and run and take life for granted.”

At the Seniors Fight Back course in Cerritos in July, Shirley Green said she would like the self-defense workshop to become a regular feature.

“That’s excellent,” said Green, 72, a third-generation Japanese American. “You should have it all the time.”

A husband and wife from Rossmoor said they stopped walking their neighborhood after seeing attacks against Asian American seniors on the news.

“It’s always in the back of my mind,” said the 77-year-old man, who only gave his last name, Jen, out of fear for his safety. “We have lived in the USA for over 30 years. This is the first time that we have felt uncomfortable here. “

As the event came to an end and the seniors took their final kicks, the Mayor of Cerritos, Pro Tem Chuong Vo said, “You are all trained fighters now.”

Everyone burst out laughing.

Cesar Echano, the Filipino American who was attacked in the park earlier this year, is completely cured from his injuries.

He hasn’t returned to the park yet but said he will soon. He said his attacker was not arrested.

At another Seniors Fight Back class on Aug. 5 in downtown Los Angeles, Scolesdang, the MMA fighter, barked instructions that were translated into Korean.

More than 100 people, mostly elderly Koreans, listened as he described how to grab an attacker by the neck and perform elbow strikes.

But these physical techniques should be the last resort, Scolesdang said at the class sponsored by LA district director Hilda Solis.

Being aware of your surroundings and projecting confidence through body language are the best ways to deter attackers, he said

Young Sook Kim, 70, said she started taking a taxi instead of her usual bus to Koreatown for groceries because she was afraid she would be attacked.

“I want to learn to protect myself. That’s why I’m here, ”she said through a Korean interpreter.

‘An Arm and a Leg’: They Turned Grief Into Action